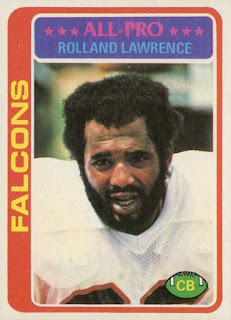 Rolland Lawrence was not a tiny cornerback, small (5-11, 175 maybe) yes, and for sure he was no Mel Blount who was 6-3 but he took over from Ken Reaves who was that size, and a Mel Blount-type of player. Reaves was good enough to cause Howard Cosell to lament "I don't know why the Falcons ever traded that guy" during a Monday Night Football telecast.
Well, Lawrence was a big part of that, the Falcons knew Lawrence could do the job. He was asked about his size he'd say "size is just a number" while admitting that if a big back came to his side on a sweep he'd have to "hit him in the kneecaps."
His rookie coach saw him in 1973 and said "What's he trying out for, the concessions?".
He labored most of his career with a struggling Falcons team. In 1973, his rookie year they were decent but were terrible from 1974-76. But Lawrence was not, even earning All-NFC status in 1975 with his nine picks—just two behind Blount's league-leading 11.
Additionally, from 1975 to 1979 he picked off at least six passes a year, and from 1975-80 he led the NFL in picks—not Mel Blount, not Monte Jackson, not Ken Riley, and not some ball-hawking safety, it was Rolland Lawrence.
With the 1977 Gritz Blitz Defense, Lawrence finally got some major recognition being a consensus All-Pro and part of a defense that set the 14-game record for fewest points allowed. That year he picked off seven passes and got a sack—which he called his "proudest NFL moment."  He also lost two pick-6s on penalties and also a scoop-and-score on a Falcon defensive infraction. It may have happened but it is hard to imagine any player losing three defensive scores in one season. Chalk it up to the cost of doing business as an aggressive defense.
As the Falcons got good and after a 12-4 season in 1980 Lawrence got hurt—he was put on injured reserve in 1981 with a bad hamstring injury and was cut in August of 1982 when he tried to comeback from that hammy. The writing was on the wall, he was done.
He left a good mark on the NFL and had a very good career, you certainly paid the price if you challenged him too often, he would help in run support, and could return punts and kicks—though his return averages were nothing to write home about.
He was a gifted athlete at Tabor College in Kansas he was a running back on the football team and was the star of the track team running the 100, 220, 440, all the relays, and was a fine javelin thrower with a personal best of 230 feet. Not bad for a 175 (if that) man.
He was not drafted in 1973 but after spring an offer by scout Dick Haley and the Steelers he signed with the Falcons and the rest was Falcon history.