By John Turney and TJ Troup
Like with the 1952 Retro Team we've attempted to award rookie players from 1953. Here is the full First-team and Second-team— 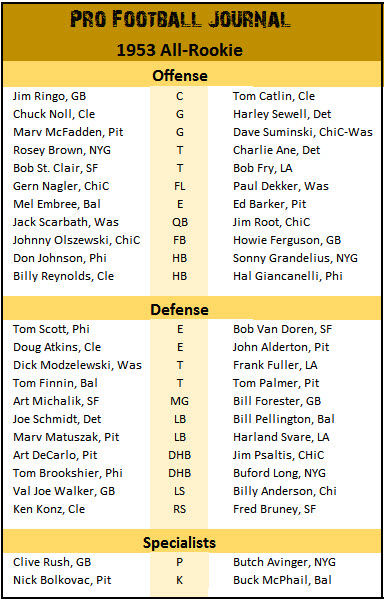 Doug Atkins played left end for the Browns and was not perfect by any means but he and tom Scott were the ends that made the most plays that we saw. Joe Schmidt would be the Defensive Rookie of the Year, however. He was playing at a high level from day one for the Lions.
Three Hall of Famers debuted on the offensive line—Jim Ringo, Rosey Brown, and Bob St. Clair and of the three we think Rosey Brown was the best that year and was the best Offensive Rookie as well.
Posted by John Turney at 3:06 PM