Yesterday, NBC's Mike Florio suggested Lynn Swann should "tread lightly" when speaking about Hall of Fame qualifications. Florio makes the case that Swann's Gold Jacket is because of "(T reasons: team accomplishments and his performance in Super Bowl X."

I am not sure how Florio knows that, perhaps he has spoken the Hall of Fame voters debated his case 14 times, but it may be more than the two reasons Florio mentions. Other reasonable folks have different views. Bob Labrolia wrote, "Quality over quantity might be the simplest way to characterize . His 907 receiving yards in 16 playoff games is more than he ever amassed over a whole regular season, and he also averaged 18.9 yards per catch in the to go along with nine touchdowns". That is also the mantra Paul Zimmerman used many times when writing about Swann, "big plays in the biggest games" Dr. Z. say.

It was a contentious debate, however, Myron Cope, the Steelers' radio broadcaster and inventor of the "Terrible Towel," resigned from the selection committee because he felt he was getting too emotional and might be hurting Swann's chances of induction.

Other points were that not only has the game changed to allow for far more passing attempts, even after the change Chuck Noll was a run-first coach. From 1974 to ’82, the Steelers ran the ball 58.9 percent of the time, among the highest percentages in the NFL for that period. Still, when the Steelers did throw, their passes were down the field. During that same period of 1974-82, the Steelers averaged 14.1 yards per completion, the second-highest average in the NFL. While the Raiders talked of the "vertical game", it was the Steelers who practiced it more effectively. states that the change in the game was a "knee-jerk" response. But, it could be said a cursory look at "numbers" could also be a "knee jerk" response, correct? 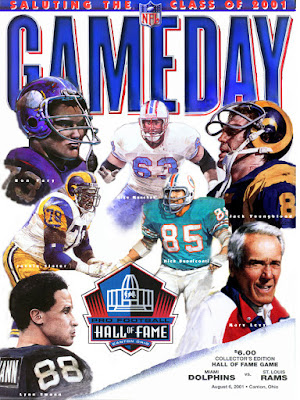 Swann was the MVP in Super Bowl X with perhaps the best "big" game any receiver has ever played. He made four catches, three of the circus variety, for 161 yards, including the game-winning grab. "Terry Bradshaw only threw five passes to me that day." What Swann won't tell you, but knows in his heart is that a normal wide receiver could not have made three of those catches. They were too difficult, too unique to his set of skills — in a word, too much Swann.

He caught the go-ahead pass in Super Bowl XIII that put Dallas in a hole. On that one, Swann called the play in the huddle because he saw the Dallas cornerbacks playing "up". He knew they were biting on the three-step drop, so Swann waited for Bradshaw to pump-fake, and that was his signal to blow by the corner. He did, and that touchdown, for all intents and purposes, sealed the Cowboys’ fate that day.

The following year there was Super Bowl XIV, in which he made a spectacular, leaping 47-yard touchdown reception that gave the Steelers the lead. On that catch, Swann out leaped the Rams’ two best defensive backs, Pat Thomas and Nolan Cromwell. Cromwell was so close to knocking it down that, to this day, upsets Ram fans to see that highlight. A few plays later, Swann was knocked out of the game with yet another concussion, and it became Stallworth's turn to catch the game-winning touchdown pass.
Swann was a First-team All-Pro three times and maybe had his most satisfying compliment when Jerry Rice, the king of all wide receivers, paid Swann the best compliment ever. It was done in a subtle way, the way jocks talk to each other, simple, direct and sincere, "He walked up to me," Swann remembers, "and said, ‘Swannie, you were "the Guy," to everybody.’ " Swann knew what that meant. Swann knew he had made an impact.

Maybe that is not enough for some. Reasonable people can disagree and Florio and others do. However, what is a bit more problematic is how this relates to the Terrell Owens mini- that has buzzed since last Saturday.

Earlier today Florio wrote that "Hall of Fame voters definitely blocked T.O. being “so disruptive" and opined that if a player has such issues that if those issues are great enough to keep him out on his first try then "(They) should keep him out forever." Florio then attempts to refute the criticism that T.O. disruptive and that "The notion that “five teams couldn’t wait to get rid of” Owens simply isn’t true". Well, maybe it is overstated, but it is a fact that he teams often in his prime and they often surrounded the disruptive incidents.

Additionally, the so-call disruptive factor was part of the criticisms of Owens, but not the only one. It is my understanding that his leading the NFL in drops and near the top other seasons was brought up in the meeting as well as poor route-running and other esoteric things.

So, if the shoe is on the other foot, maybe the T.O.  can state why he IS a first-ballot WR. I don't have a dog in the fight. Had he gotten in over, say, Tony Dungy, I would not have been critical of the committee. I really don't think folks can make a huge case that Owens deserved to get in on his first try more than Harrison deserved to be in on his third try.

My view is that none of the recent WRs, other than Jerry Rice had careers such that they were first-ballot WRs. Again, this is just me, but Jim Brown, Johnny Unitas, Joe Montana, that is first-ballot. My view is there are a couple players that got in right away that were not quite up to the Brown-Unitas-Montana standard, but that is what happens when votes are taken.

Another point Florio makes is this, "Why not just say only five modern candidates can get in each year, and with two of the best receivers in NFL history up at the same time, we decided to give the spot to the guy who had been waiting the longest? It’s far closer to the truth, and it can be stated without requiring voters to take shots at a guy who, regardless of his real, embellished, and/or imagined behavior, merits at least some degree of respect for what he accomplished on the field.".

I agree with the first part is because there is limited room and so many qualified candidates, only a few can jump to the head of the line and be elected right away, Brett Favre fit that bill last week. Owens really didn't. However, the problem I do have is the part where he talks about writers taking "shots" at Owens.

Well, that is why the meeting is private, so that the honest views of writers and the fruits of their research can be discussed openly. In this case Florio only knows about the "shots" is someone spoke about it. Well, that is fine, but it hardly means voters were taking unnecessary shots.  Also, Owens made the semi-finalist list and the final 15 lists. That seems to be giving Owens "some degree of respect", no? Is taking shots what Lynn Swann  "accomplished on the field" showing "some degree of respect" even if you don't agree with the selection?

Did Owens himself Chris Carter due respect when he said, "Chris Carter begged his way into the Hall of Fame? Carter was another of the great receiver who had to wait due to imperfect career, albeit great.

job is to report on all aspects of the NFL, so his articles about the Hall of Fame are fair game. Also, here and here. But if memory serves Florio may not have been so pure about showing respect what players did "on the field" all the time in the past. His turd watch was a staple of Pro Football Talk, as was his reporting on the "Love Boat" and the "Original Whizzinator", all off-the-field affairs.

Perhaps all of us, me included, should tread lightly when commenting on the Hall of Fame process and criticisms of what is said in those meetings. What they say in private, many in the media are posting on publicly and that could be construed as not showing respect for what those players did on the field. Maybe Florio and Jason Whitlock are more familiar with the process than I am or know the voters better since they are mainstream sports journalists, but for Whitlock's complaints about the HOF Class of 2011 there is another reasonable explanation other than the system being broken, which is what he, and Florio are insisting their writings.

This will hit critical mass when Darren Sharper is up for the Hall of Fame. When you look at his numbers and All-Pro honors his 63 interceptions are remarkable when adjusted for era. When Paul Krause intercepted his 81 passes  (1964-79) when the interception rate in the NFL was 5.3%. Sharper's 63 picks in an era (1997-2010)  where the interception rates is 3.1% However, Sharper will never get in, in my view, due to awful off-the-field behor.

The Hall of Fame selection committee does good work. Do I always agree? No. But they  their due diligence and in my view do a better job that the voters that them as their access to information has expanded. More football on television, more media outlets, more researchers all leads to more information. It is a tough job to sort through it all and then pick the best five of 15 qualified candidates. That's my take.

Owens will get in, and when he does, it will be because of his has more positives than negatives (but the negatives are real). In fact, one data point is our receiving stat in which Owens ranks highly. But it is not a "snub" or any type of "injustice" that Owens will have to wait. His career, while very impressive, is not in the Hutson-Alworth-Rice category, and that's just one  opinion. In fact, it can be argued that Owens getting in on the first ballot could have been a real injustice.