PERSPECTIVE
By John Turney
On page 553 of the 2015 NFL Record and Fact Book it shows the following: 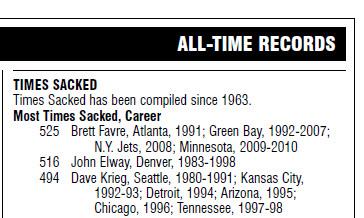 by Seymour Siwoff of Elias Sports Bureau in 1963. In 1969, Elias and the NFL began publishing times any given individual quarterback was sacked. So, finding those numbers is relatively easy since they were found in the NFL Record and Fact Books and are now reproduced on Pro Football Reference.

However, by going through the play-by-plays () one could easily find who was sacked prior to 1969 (and 1963, even). That data , unlike the player who did the sacking who was usually recorded but not in every single instance.

Thus, by going through the method described above, and thankfully the Minnesota Vikings have kept their documents safe and in good order, we find the following: