We at Pro Football Journal are trying to pick the best individual seasons in the history of each franchise, which we will continue today with the Baltimore Ravens. By "Career-year" we mean the best performances at each position, with the following rule: Only one season per player per position. For example, here, we cannot pick Ray Lewis's best two seasons and use all linebacker slots. 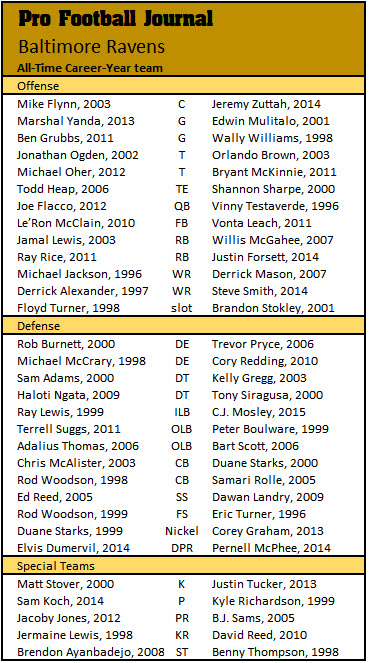 Finding a tackle opposite Jonathan Ogden was not easy, they have had solid players, but no one that really stood out and several that disappointed. We looked at several things and came up with the order in the chart, but will be looking deeper to see if there may be a hidden season or two by someone. For Ogden we went with 2002 when he allowed only 2 sacks and was not flagged for a single penalty all season. 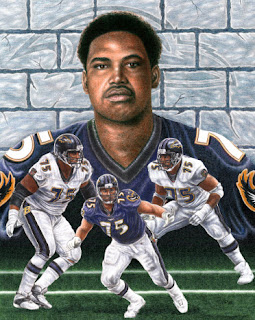 First-team guards were easy, as the Second-team guards. Mike Flynn was a heady player who was part of the monster season by Jamal Lewis in 2003.

Jamal Lewis was chalk at one spot. Ray Rice had to get the other season. The backups presented some tough those who we listed seemed like the next-best to Lewis and Rice.

Todd Heap had a few seasons that qualified, we went with 2006 when he was voted the NFL's top TE by NFL Alumni, backing him up is Shannon Sharpe from the 2000 Championship team. McClain was a fullback who could carry the ball, Leach is one of the modern, guard-in-the-backfield types, though he could catch well.

Michael Jackson and Derrick Alexander were holdovers from the Cleveland Browns and still have the best statistical seasons by any Ravens receivers. Floyd Turner had better numbers and he gets the nod over Stokely.

We went Flacco's Super Bowl-winning season over a couple of slightly better statistical seasons. Vinny put up big numbers in 1996 and deserves recognition for it.

was one of the best special teams players in -and-a-half and 2008 was his best season. Bennie Thompson was an All-Pro special in 1998. The returners were prioritized by returns for touchdowns and then post-season honors. The First-team selections are particularly strong. Gary Stills and his 2006 season (24 tackles on special teams) gets an honorable mention

Kickers and punters are prioritized by honors then net punting and FG accuracy. All four are strong for the Ravens and could be juggled a bit. Sam Koch's 2014 stands as his best with a 43.3 net average and a 26-4 inside-the-20 to touchback ratio, though in 2015 he made the Pro Bowl however 2014 was a slightly better year.

The defense was fun to choose, with three Defensive Player of the Year winners and other strong seasons by one of the best defenses, year-in, and year-out since they became a team in 1996

We went with honors and stats for the CB positions in general. Rod Woodson is qualified for two spots—safety and corner. As a corner in 1998 he picked off six passes and took two to the house. The rest of CBs here are very solid, but not superstars. We were tempted to put as a nickel here, but we though the two listed made more plays so Deion gets honorable mention as a nickel as does Corey Ivy for 2008 when he had 52 tackles and 2.5 sacks. Ivy was excellent as the "Cat" blitz, amassing 9.5 sacks from 2005-08 with Ravens and Rams. 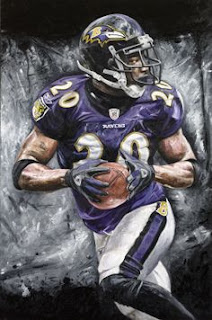 Okay, for purists, they will see Ed Reed listed as a strong safety. Well, he was listed there by in 2004. However, we are fully aware that in the safeties really are interchangeable and both safeties will play strong and free depending on the formation and situation and defensive call. But in his early years, Ed Reed did play closer to the line of scrimmage and made plays there. In his four seasons when he did line up to the TE side (2002-2005) he had 17.5 run stuffs. In the seven Raven seasons when he lined up more to the open side (2006-2012) he had 7.5 run stuffs.

In 1999-2000, sometimes against base personnel (21) the Ravens would use a Buddy Ryan-type 46 front, but would play cover-3 deep and have the tight end man-to-man. They would also blitz Peter Boulware from the "Otis Wilson" spot and two defenders would then have to cover the short zones, all five of them. We don't know what they called it, but in verbiage, I am familiar with, it would be Bear Cover-3 latch. The "latch" means a takes the TE on all routes, everyone else in . But it would not be as complex as what Marvin Lewis was doing. According to PFJ's Coach T.J. Troup they could get away with this because the two defenders assigned to the underneath zones could run and tackle. Their names? Rod Woodson and Ray Lewis.

Lewis had two DPOY to choose from and it was a tough call, but we went with 1999 rather than 2000 or 2003. He had 16.5 tackles for loss, picked off three passes a career-high in tackles. His runner-up season is 2003 with his six picks.
Had we chosen a 3-4 ILBer it would have been Mosely and we'd find two Second-team inside 'backers. Daryl Smith is an honorable mention for his 2013 season when he had three picks, five sacks and 123 tackles. He'd be the Second-team MLBer had he gone with a 4-3 scheme. 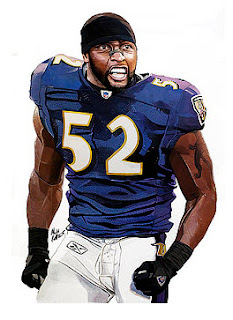 Outside linebacker for Ravens scheme is a hybrid and has been, really, since the Ravens inception. Suggs is /half defensive . Thomas was part linebacker, part end, sometimes even lining up outside. Boulware was a linebacker versus base offenses, and when they went sub (3-wide or 4-wide) he was the left defensive end. Bart Scott would play inside, then outside, in 2006 he had 9.5 sacks. Had to leave him off the First-team for that year, but Suggs and Thomas had the best years, though we could put Scott as an ILB because he did play there in the 3-4. Jarrett Johnson would be honorable mention as would Jamie Sharper's fabulous 2001 season.

There is some beef in the Raven defensive line choices. Only Michael McCrary is a speedster-type. Why do we at insist that AP All-Pro teams not "The" All-Pro team? In addition to THIS: here is an anecdotal example. In 1998 only Sporting News recognized McCrary as First-team All-Pro with it's player vote. Why is that important? McCrary not only had the then single-season record of 14.5 sacks he had 12 run stuffs, for 26.5 plays behind the line of scrimmage.

The AP All-Pro DEs were Reggie White (also DPOY) and Michael Strahan. White had 16 sacks and 3 stuffs for 19 sacks+stuffs. Strahan had 15 sacks and 8 stuffs for 23. The Second-team All-Pros were Smith and Michael Sinclair, whose totals were 10+4=14 and 16.5+3.5 = 20, respectively. It was a year where three of the four were the top  and possibly the run stuffs were not looked at as part of the equation or just ignored.

Burnett is a personal favorite. He'd line up as end in base and in nickel he'd reduce to a 3-technique (and also play 3-technique in the 46). In 2000 he had 10.5 sacks, 6 stuffs, 5 fumbles recovered, 3 forced fumbles and a on the NFL's best defense. Trevor Pryce and Redding were both Rob Burnett-types, ends on run downs, tackles in nickel, with Pryce 13.0 sacks in 2006.

Haloti Ngata was consistent and had a few that fit. Sam Adams is the other choice. The three quickest defensive tackles off the ball we've seen 1. Sam Adams, 2. Alan Page, 3. Aaron Donald. Goose and Gregg back the tackles and are -technique . In 2003 Gregg had  80 stuffs and 3 sacks. Siragusa may be only defensive lineman who has a season chosen where he didn't have a sack. We went with , but could have just as easily gone with 1999 when he had 3.5 sacks.

had tons of sacks and two starts in 2014 and McPhee had , too, often as inside rusher. Paul Kruger gets an honorable mention.

Agree, disagree? Did we make a mistake? Let us know.
Posted by John Turney at 1:59 PM