Again, the drill here is to pick the best individual seasons in the history of each franchise, which we will today with the Minnesota Vikings. By "Career-year" we mean the best performances at each position, with the following rule: Only one season per player per position. For example, here, we cannot pick Alan Page's  two seasons and use both defensive tackle slots.

When you see the picks you may be able to see why Vikings fans may not like some of names on list, but I didn't miss kicks that would advance my team in playoffs and didn't sign Brett Favre in 2009 who had, perhaps, the best season of any Viking QB in history. 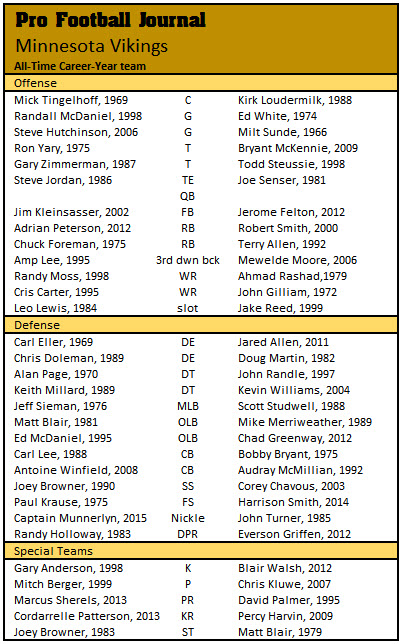 Randall McDaniel? Pick any of maybe seven seasons. Hutch? of three. Ed White was respected by the NEA (Players) All-Pro Team and was First-Team in 1974.  Yary was many All-Pro and in 1975 he won the third of his three NFC Offensive Lineman of the Year Awards by the NFLPA. Gary Zimmerman is the best left tackle in team history and 1987 and 1988 were his best seasons. We went with the 2006 Steve Hutchinson season due to him being voted the NFL Alumni Offensive Lineman of the Year but 2007 and other seasons would have worked, too.

Grady Alderman, 1969 (All-Pro), Tim Irwin (1988), and Matt Kalil, 2012 (Pro Bowl) all get an honorable mention at tackle.
had a pile of touchdowns in 1975, both rushing and receiving in 1975, Peterson, well, his 2,000-yard season was a no-brainer. I added one 1960s-style fullback and one 1990s-2010s type fullback. Vikings, in Jerry Burns's offense always threw to the backs, though it was never called the "Minnesota Offense" he did lots of things that Bill Walsh did, using backs, using space to stretch and had great ideas on how to get key players into space, like Walsh is given so much credit for.

Moss had two dominant seasons, we went with 1998 with the higher yards per catch. Carter's season was the one where he caught the most touchdowns since that's all he did.

Leaving off Anthony Carter's 1987 season was tough, but given the passing game and rules in the 1970s we went with Gilliam. Carter gets honorable mention. Gene Washington, 1969, Sammy White, 1976, Jerry Reichow, 1961 also get a special mention.

Kyle Rudolph, 2012 (9 TDs) gets and honorable mention at tight end.
How deep does your defensive end legacy have to be to leave off Jim Marshall? Well, Marshall's Second-team All-Pro season of 1969 (14 sacks) ranks fifth. Being true to this exercise we went with Carl Eller's 1969 15-sack season tied for his career high and also had his career high in tackles for loss with ten. He had the most MVP votes of any defensive player that season by AP and UPI, and was the runner-up to Dick Butkus in the NEA NFL MVP vote. In was the NFLPA NFL Defensive Lineman of the Year for 1969.
edges out Allen . 1989 season was DPOY-worthy as was Allen, but Doleman seemed to be more dominant to us. Doug Martin's 11½ sack season in nine games and his Pro Football Weekly First-team All-NFL selection puts him at #4 above Marshall.
Jim Marshall is a Viking favorite; a Steve Sabol favorite, but he just didn't produce like other Viking defensive ends. He was never a First-team All-Pro and only went to three Pro Bowls in 20 years. His best season was 1969 when he had 14 sacks and was Second-team All-Pro, but it was far and away above his other seasons.
Again, how deep does you defensive tackle slot have to be to leave off Henry was maybe the underrated defensive tackle of the 1990s and maybe all-time? In , how good are your tackles if John Randle cannot make the First-team?

It was hard to leave out Henry Thomas, but he gets an honorable mention for 1991 when he was a Pro Bowler, had 70 tackles, 10.5 stuffs and 8.0 sacks. Gary Larsen's 1969 Pro Bowl season when he had 8 sacks. Pat Williams was a Pro Bowler in 2007 and had 62 tackles with 12 of those for losses and we also give both an HM nod. Lance Johnstone is a strong HM at designated pass rusher for 2004, 31 tackles, 11 sacks, and 5 FF and his 2003 season was just as strong.
There were some great linebacker names that got left out, Wally Hilgenberg, Fred McNeil among as looking only at best seasons we had to go with who we thought were the best.

Matt Blair could have had 1978, 1979, and 1981, so we went with 1981 with his career-high 6 sacks, 12 passes defensed, over 150 tackles, and four blocked kicks. In 1980 he was All-pro but it was not one of his best seasons, but that season may not have had the best OLBer he was top of a weaker group, in 1981 he just couldn't beat out rookies like Lawrence Taylor or Hugh Green, but 1981 he was simply great. We chose Blair's 1979 for special teams because it was his career-high in blocked kicks with five, but he had two other seasons with four blocked kicks/punts. He may be best-ever in that skill.

Ed McDaniel had 18.5 /pass stuffs  a career-high in sacks with 4.5 in 1995, and in our was one of the best unknown seasons for an OLBer in history. Mike Merriweather's 1989 was special as well, over 90 tackles lots of stuffs and six forced fumbles set it apart.

Krause's only consensus All-Pro season with the Vikings was 1975 when he had 1o . Browner's top strong safety season was 1990, but he had a couple others overall, 1990 was the best. The corners were chosen in a combination of interceptions and All-Pro honors. Though good, they are not quite at the level of the safeties.

We could have gone with Fred Cox's 1969 All-pro season, but Anderson and Walsh were also First-team All-Pros, but they also have a bittersweet taste in Viking fans' mouths for obvious reasons. But what must be remembered is they were a big part of the reason Vikings advanced as far as they did those seasons (though we went with 2012 for Walsh). They had great seasons and were (are) excellent kickers.  was considered as well, give him and Cox honorable mention.

Berger and Kluwe take the top spot with a mention for Bobby Walden's 1964 season when he had . Greg Coleman led the NFC in net average (36.5) in 1983 and for that, he also gets an honorable mention.

Returners were given a lot of on how many TDs they scored, but in this case, they als0 had great yards per return statistics. From this, it looks like in good hands and feet.

Browner and Blair are the special teamers, Blair for his amazing ability to block kicks. Honorable mention goes to Bill Brown in 1974 when he was still going downfield and covering kicks and busting wedges. Heath Farwell is an honorable mention for his 2009 season.

Okay, now for the quarterback. How can you argue against Favre's 2009? One game short of Super Bowl like Cunningham's 1998 and Culpepper's 2000? Favre had 33 TDs and only seven interceptions, the lowest interception percentage of any starting Viking in history. He also has some amazing games and throws that were for the storybooks. Favre's 107.2 passer rating was second-best in the Viking annals behind Culpepper's 2004 season. , in 2000, threw for 33 touchdowns and ran for seven for a total of 40 touchdowns. How many QBs in  history have two 40-plus touchdown seasons? Culpepper has 2.

We also considered Joe Kapp's 1969season. He only threw for 19 the Vikings didn't throw much. Those 19 touchdowns accounted for 8% of his throws, the most in Viking history for qualifiers. He also got some MVP support.

Randall Cunningham got a lot of MVP/Offensive Player of the Year support in 1998 with his 34 touchdown passes and 106.0 passer rating. It was, though a disappointment in the NFC game, a fantastic season.

Also considered was Warren Moon's 1995 season with 33 touchdowns and 4,228 the team record knocked that one out.

Finally, we looked at Fran Tarkenton's seasons, and there were several. We went 1975 when he was a consensus MVP. True, the stats don't measure to the more recent players, but it was 1975 with different rules and 14 game seasons. He was a consensus MVP and All-Pro. We went with him. You think we'd go with Favre? No way.

Here is the final : 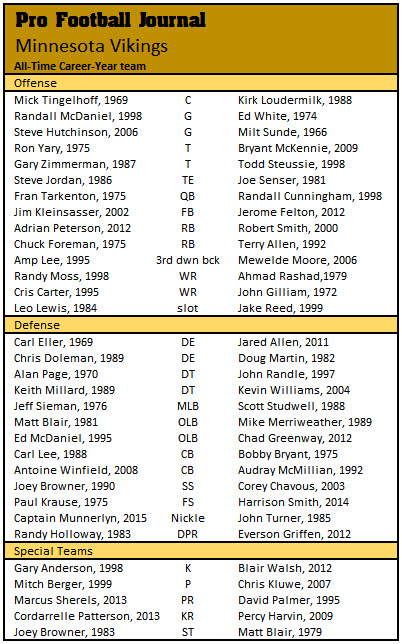