Okay, the drill here is to pick the best individual seasons in the history of each franchise, which we will begin today with the Carolina Panthers. By "Career-year" we mean the best performances at each position, with the following rule: Only one season per player per position. For example, here, we cannot pick Julius Peppers's 2 seasons and use both defensive end slots. 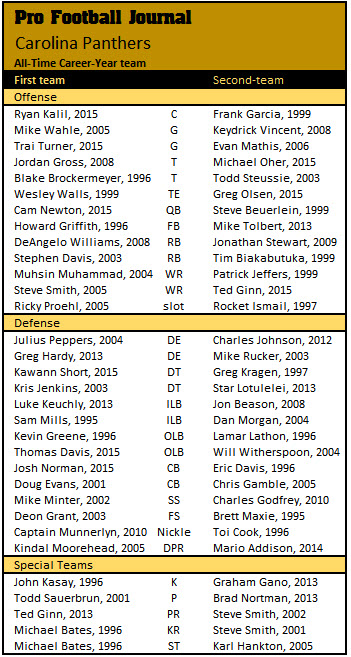 Kalil could have had either 2013 or 2015, we went with 2015 because of the Super Bowl appearance. Frank Garcia had several good seasons, even being selected to Dr. Z's All-Pro team, but we went with 1999 due to protection of in 1999 when he was among the best passers in the NFL.

Only two guards for the Panthers have been Pro Bowlers. After that, we went Vincent for being a starter on the 2008 team that helped DeAngelo Williams rush for 18 touchdowns. Jordan Gross is the only All-Pro in franchise history at tackle, after that, it's solid play, but not stellar.

Wesley Walls's touchdown total puts him up on Olsen's great season in 2015. Howard Griffith was a great lead blocker wherever he played, had a slight edge over Tolbert.

For wide receivers, both numbers and honors dictated the selections, as well as for the slot receiver.

Quarterback? , who could it be? was among the best in NFL history, he will be one of very few that were All-Pro, MVP, and won a Super Bowl if he completes his mission next Sunday in Santa Clara. numbers propel him past Delhomme and others. 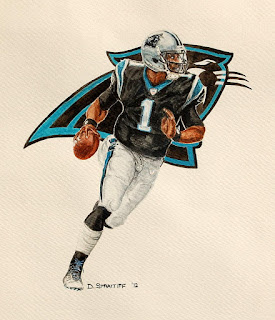 Peppers has most of the best seasons, we went with 2004. Greg Hardy, yes, that Greg Hardy, was excellent on the field in 2013. Short was a PFJ All-Pro this year and Kris Jenkins was a force in the early 2000s.
Kragen still has the most tackles in a single season by a Panther defensive tackle. He was a nose in a 3-4 and Lotulelei is a nose in a 4-3.
A pretty great tradition of linebackers gives this spot a lot of stellar seasons. , Mills, Beason, Greene, Davis (4 picks 5.5 sacks this season), Lathan and 'Spoon. was a Defensive Player of the year in 2013, Kevin Greene was the NEA Defensive Player of the Year in 1996 and led in sacks, Lathon was on his heels.

Mark Fields is an honorable mention for his 2002 season when he had 101 tackles and 7.5 sacks, 7 passes defensed, one pick and 10 run/pass stuffs.

Decent corner seasons, too, with Josh Norman in the DPOY conversation until late in the season in 2015. Had to really look to fill out the  of safeties. Chris Harris had 97 tackles and forced 8 fumbles in 2007, a rare achievement with his forced fumbles total. He and Charles Godfrey (with his five picks in 2010) get honorable mentions.

Kasay was a  of that advanced to the NFC Championship game. Michael Bates was a great and a good kick returner. 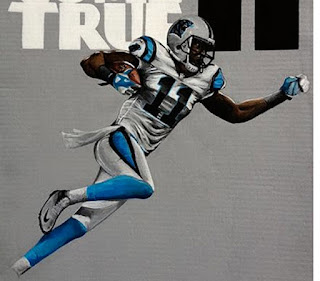 Agree? Disagree? Post comments and make your case and tell us where we screwed up.
Posted by John Turney at 12:47 PM