Okay, the drill here is to pick the best individual seasons in the history of each franchise, which we will begin today with the Denver Broncos. By "Career-year" we mean the best performances at each position, with the following rule: Only one season per player per position. For example, here, we cannot pick Randy Gradishar's  2 seasons and use both inside linebacker slots. 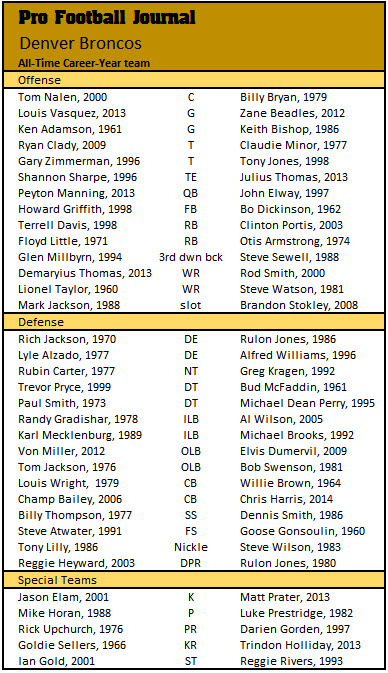 Usually we will favor quarterbacks who finish the job—they have a great season and win the championship game. In 1997 John Elway won it all and threw a career-high 27 touchdown passes. He'd had an MVP season (1987) and a slightly better statistical season (1993) and a great on in between (1997).
But Peyton Manning's 2013 was just too good, even though Seattle beat them in the Super Bowl. He was the MVP, All-Pro, led the NFL in passing yards and touchdown passes, and tied for the best record in the league with Denver going 13-3. Had we won the big game it would have been just about a perfect season.
Craig Morton is an honorable mention for his 1977 season. He was the UPI Offensive Player of the year and got the Broncos to the Super Bowl.
No, we have not seen Ken Adamson play. All we know is he was All-AFL in 1961.   would be an honorable mention. There were lots of good seasons by running backs left off, but tough decisions rule the day.

Nalen was an All-Pro and Bryan was a Second-team All-Pro in 1985, but we went with 1979 due to his high rating by Proscout, Inc. Jerry Sturm, 1964 and Casey Wiegmann, 2008 are honorable mentions as Pro Bowlers.

Mark Schlereth, 1998, gets an honorable mention as a Pro Bowler as does Tom Glassic in 1977

For this, we chose a 3rd down back since they were a big part of Broncos nickel offense in the 1980s and 1990s.

We also are giving Craig Morton, 1981, and Charley Johnson, 1973 on the honorable mention list. Morton was an AFC Player of the Year in 1977, and it was well-deserved, but we think 1981 was a better season, and it may have been his best NFL season. 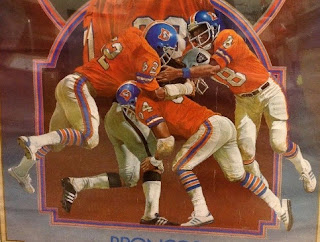 We went with 1970 for Rich "Tombstone" Jackson since he was a consensus All-Pro, but 1969 may have been slightly better when he had 12½ sacks. However, the 1970 Broncos run defense was great and Jackson had 10 sacks that season. Ditto with Lyle Alzado, he was the AFC Defensive Player of the Year in 1977 but 1974 may have been his best, when he had 13 sacks as a 4-3 right defensive end. 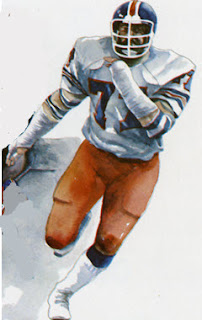 Tom Jackson was not All-Pro in 1976, but he was in 1977. We went with 1976 because of the 7 interceptions and 4 sacks; Jackson was on Paul Zimmerman's 1976 All-Pro team for the New York Post. Bob Swenson's 1979 may have been as good or better than his 1981 All-Pro season as a SAM backer, but just another of those where a few seasons would work. 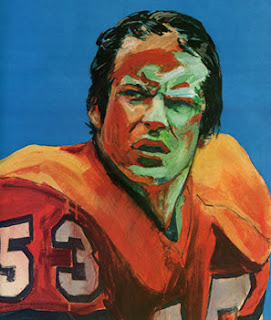 Like Gradishar, several of Louis Wright's seasons would qualify, same with Champ Bailey and Atwater. It was hard to leave Gonsoulin the Second-team, but Atwater is simply an All-time great.

In 1964 Willie Brown had 64 tackles and 39 passes  and was All-AFL. He takes a Second-team slot behind Louis Wright and Champ Bailey. Bailey was the NFL Alumni Defensive Back of the Year in both 2005 and 2006 but we went with 2006 with his league-leading 10 picks to go with the 85 tackles and 21 passes defended. Louis Wright takes the top slot for his 1979 season, though any season from 1976-79 could be the choice. In 1979 he had 66 tackles and 16 passes deflected and two picks, but his coverage was superb and his run support was unparalleled in the NFL at that time and was a consensus All-Pro and All-AFC pick. Chris Harris got the other Second-team slot for his 2014 Pro Bowl campaign.

Rick Upchurch's 4 punt returns for TDs in 1976 beat out Darrien Gorden's 3 in 1997. Detron Smith, 2000, is an HM special teamer as is Keith Burns in 2003 and Phil Olsen is, too, for this 1976 season as is Godwin Turk for his 1976 season when he would have been in contention for a Pro Bowl selection if they had that slot back then. 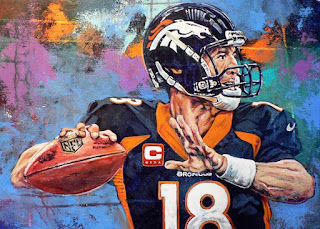