We at Pro Football Journal are trying to pick the best individual seasons in the history of each franchise, which we will continue today with the Tampa Bay Buccaneers. By "Career-year" we mean the best performances at each position, with the following rule: Only one season per player per position. For example, here, we cannot pick Derrick Brooks's best two seasons and use both OLBer slots. The offensive linemen were picked based on the All-Pro selections or Pro Bowl selections, however, there have not been many such honored players in history. Paul Gruber was a stalwart who had several good seasons that would fit here. Farrell was a First-team All-Pro by Sporting News in 1984. Charley Hannah was very good in 1979, when the Buccaneers, in their fourth season, advanced to the NFC Championship game. Greg Roberts never lived up to his draft status but was good in 1981. Peter King named Trueblood to the Sports Illustrated All-Pro team in 2007.

Winston should move into one of the two slots very soon. It was hard to leave out Doug Williams, but in his run with the Bucs it was joked that he was the only one ( 1979-1980) who could overthrow the Ayatollah Khomeini. Even for his era, he was not an accurate quarterback.

The running backs are interchangeable with the exception of Alstott. We ordered them this way, but reasonable people could argue that they could be ordered in another way. 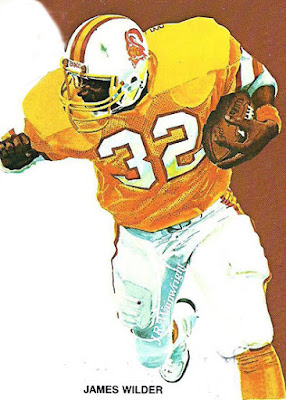 Wide receivers have not garnered post-season honors, but these are the ones that we felt stood out in that they were at least mentioned by some outlets for honorable mention All-Pro. Jimmie Giles was a consistent tight end who could block. Winslow was a good receiver who wasn't a great blocker.

The Buccaneer tradition is defense and they are stacked on this side of the ball.  could have several years picked, but we went with the obvious, 1979. That season he was the Defensive Player of the Year, had 11 sacks, 61 solo tackles, 27 assists, (88 total tackles)  and 8.5 stuffs. He also had three forced fumbles, blocked three kicks, two fumbles recovered, one of which was a scoop and score. He also knocked down four passes and was credited with 60 pressures.

Simeon Rice had a great season in 2002. Wally Chambers had a good season in 1979, his second as a 3-4 defensive end after really earning his bone fides as a defensive tackle for the Bears in the mid-1970s. Chambers had 46 solo tackles, 20 assisted tackles for a total of 66. He had 5½ sacks and 43 pressures and forced seven fumbles. Chidi Ahanotu was very effective in 1997.

The premier position for the Bucs may be three-technique. Lee Roy Selmon played that spot in 1976, but got hurt. Sapp's 2000 season, which PFJ contends Sapp led the NFL in sacks could have been his best, but again, we go with his 1999 season when he was the Defensive Player of the Year. McCoy and Dotson had fine seasons in the years mentioned. McFarland is the only one here who was not a three-technique. He was the shade/1-technique and was a big help to Sapp.
The Buccaneers player a 3-4 defense from 1977 to 1990 so we listed a nose tackle as well. Dave Pear had 9 sacks in 1978 and was as good a nose tackle as there was that season. Dave Logan had 9 sacks in 1981, 9.5 in 1983, but in 1984 he was a Sporting News All-Pro that season when he had 5.5 sacks. We give Pat Toomay an honorable mention for 1976, he was voted the team Defensive MVP in their inaugural season. Hardy Nickerson was steady and solid, but 1997 stood out. Ruud was good in 2008. At 3-4 inside linebacker we went with Cecil Johnson. Johnson was an outside linebacker for the was asked to move. He did it and had a good season as the Buccaneers advanced to the playoffs. However, that does not mean Johnson liked it. He likened it to going into a lion's den "wearing a three-piece pork chop suit".

Johnson edged Richard "Batman" Wood who gets a Second-team spot. Wood had 2 picks, 2 fumbles recovered and had 17 tackles for loss. Scot Brantley was a worker, good run stuffer, but was usually not on the field likely passing downs and he gets an honorable mention for his 1984 season.

Outside linebacker is the other premier position the Tampa Bay franchise. All four of these seasons were special. Derrick Brooks was the Defensive Player of the Year. He had 87 solo tackles, 30 assists for a total of 117 tackles. He picked off five passes and returned three for touchdowns. He deflected 11 passes and recovered a fumble, which he returned for a touchdown. Six of his tackles were stuffs, he forced a fumble and had one sack.

has been almost as impressive in his career and several seasons fit on this chart, but we are going with 2013. H had 107 tackles and 38 assists for a total of 145 tackles, seven sacks, five interceptions, 10 defenses. And an amazing 17.5 of his tackles were stuffs for losses to go with the two forced fumbles and his lone recovery

Hugh Green was another player who had three stellar seasons. We went with 1983, though the 1982 strike season may have been a hair better. In 1983 Green had 104 solo tackles and 20 assists for 124 total, 3.5 sacks, 7 stuffs, three forced fumbles, two interceptions that were both  6s.
The other Second-team OLBer is Dave Lewis in 1979. One almost had to see it because it was a great all-around season.  Lewis had 89 tackles, 8 passes defensed, 5½ sacks, four forced fumbles and two interceptions one of the NFL's best defenses. It was hard to regulate him to the Second-team. Lewis had a big year in 1980 as well—68 tackles and 16 run stuffs and a Pro Bowl.

Broderick Thomas was the Buc's only pure 3-4 rush backer they had in the 3-4 scheme and he only started one year (1990) in it. transitioned well in 1991 in the Bucs first season in a 4-3 since 1976. He ended the with a career-high of 11 sacks and 15.0 stuffs and 7 forced fumbles to go with his 124 tackles and he gets an honorable mention for , a great season few folks remember. Again, on most teams having 26 sacks plus stuffs would land you on the First-team but with Brooks, David, Green, and Lewis it's a tough room. Another honorable mention is Richard Wood who moved to inside linebacker

Ronde Barber and John Lynch could have multiple seasons here, but we went with 2001 and 1999, respectively. Reavis was just too good a corner to leave off, even though he was there only a season. Talib was the NFL Alumni Defensive Back of the year in 2011. Haddix picked off a lot off passes and scored with them. It was hard leaving off Ricky Reynold's 1991 season (and others) but he was a guy who covered well, didn't get challenged much, and didn't get tons of post-season honors but he was a quality corner. He, too, gets an honorable mention.

Mark Cotney was a Paul Zimmerman favorite, better against the run that the pass, he was an old-time hitter, not unlike Lynch.

The special teams were picked on the basis of mostly stats as the nickel backs and designated rushers. If folks have better seasons, feel free to post your disagreements.
Posted by John Turney at 7:46 PM