PERSPECTIVE
By John Turney
Chris Long, the Rams left defensive end was released today after eight years with the club. He was the #2 overall selection of the 2008 NFL Draft. fans will search for his career stats on the Internet at major NFL sites they will see some version of the following:

However, that is just the basics, and we will cover what is not seen in that basic stats.

Long's time in St. Louis will be marked with "worker", "motor", "high-effort" and other such adjectives. However, he didn't always get the post-season honors of some of the others strong side edge rushers in Rams history, like Deacon Jones (HOF), Jack Youngblood (HOF), Kevin Greene (HOF), even Kevin Carter (1999 All-Pro)  and Leonard Little (2003 All-Pro). However, if that is his legacy, it will be shorting Long's true on the Rams defense. 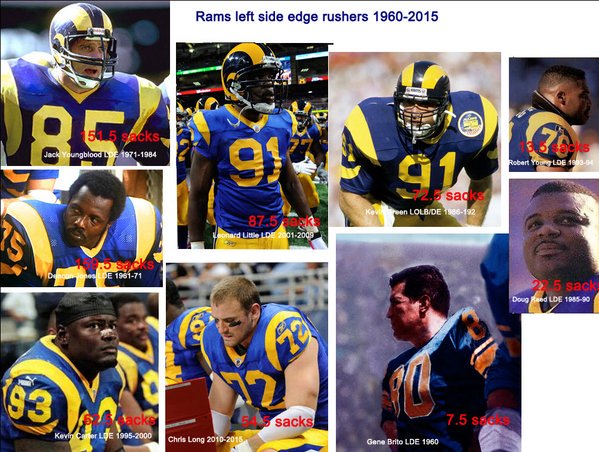 Long moved to left defensive end in 2010 and was the starter there, full-time, through 2013. In 2014 he suffered a severe high-ankle sprain that required surgery and in 2015 he damaged his knee. From 2010-2013 he averaged double-digits in sacks and was a Pro Bowl Alternate (not voted to the team, but would play if someone who was on was injured) all four years. In addition, he was the NFL Alumni Lineman of the Year in 2001, as voted on by former NFL players. These are honors one won't find in the St. Louis Rams Media Guide.

However, what is also hard to find, is the fine analysis of two metrics website sites, Pro Football Focus and Football Outsiders. Both of those sites view and report statistics that are not found elsewhere, to speak of. Among their metrics are quarterback hits, hurries, pressures. They go by several names, and at some point we will analyze how different organizations track them, but in this case it's clear. PFF and FO, though their scoring protocols differ, have Chris Long as leading the NFL in their "total QB disruptions-a combination of QB hits and pressures, (PFF) and "combined hits and Hurries (FO). PFF has him with 216 such "disruptions" and has him with 166 hits/hurries for that four-year period. And that puts him at the head of the line for all defensive linemen from 2010-2013.

For good measure, in reviewing the Rams coach's statistics, they credit Long with 211 "hits and hurries" for that same four-year period. As can be seen, each source has a different way of scoring a "hurry" or pressure, as it is subjective, but in all cases the numbers are high.

It is unknown, at this point, if the Los Angeles Rams will re-sign him for a more cap-friendly salary, or if he will go somewhere else, but via Twitter, Long has indicated he has more to prove in the NFL: 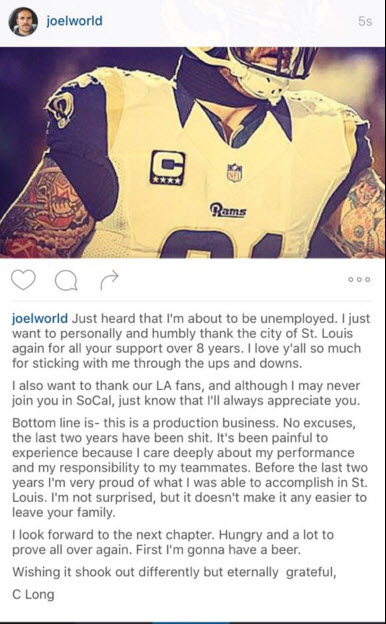