We at Pro Football Journal are trying to pick the best individual seasons in the history of each franchise, which we will continue today with the Seattle Seahawks. By "Career-year" we mean the best performances at each position, with the following rule: Only one season per player per position. For example, here, we cannot pick Steve Largent's seasons and use both wide receiver slots. 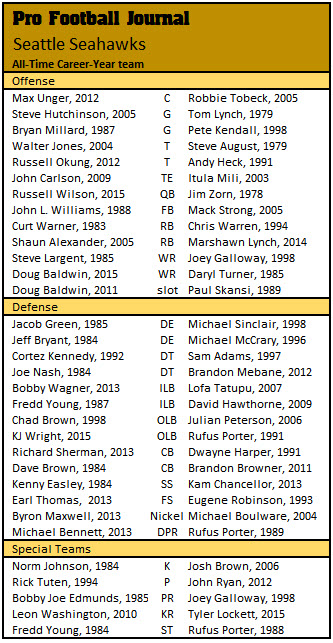 Perhaps the surprise pick is Jim Zorn for the Second-team. His 1978 season was based on his being the NEA First-team All-Pro quarterback that year. The Seahawks, in their third season, were 9-7 and had a very good offense. Matt Hasselback's best , for several reasons, was 2005. He gets an honorable mention as well as Dave 1984 season was excellent. That year he threw 32 touchdowns and led to without star running back Curt Warner.
Largent was a Consensus All-Pro in 1985, though 1983 or 1984 or even 1979 might have been better. 14 touchdown receptions got the other slot. Deep threats Joey Galloway and Daryl Turner and the Second-team selections. Baldwin also takes the "slot" spot with his excellent 2011 season.

John L. Williams may be the last all-around fullback in the NFL. He carried the ball, blocked and could catch. Mack Strong gets the "new era" fullback slot, the guard-in-the-backfield slot that often goes to the lead blocker for a running back who has a monster season.

is not a position that has a huge tradition in Seattle. Jimmy Graham could easily take this slot if he has an injury-free 2016.

Yes, the chart reads correctly, Marshwn Lynch is relegated to the Second-team due to Curt Warner's fabulous rookie season and Shaun Alexander's 27 rushing touchdown season of 2005.

was one for the books, he didn't have a holding call and didn't allow a sack. His lone penalty was a false start. It may be the best season a tackle has ever had. Steve Hutchinson could have had a few seasons listed, but 2005 was perhaps his best. Max Unger was a First-team All-Pro in 2012. Bryan Millard garnered some post-season honors in the late 1980s. The Second-team offensive line really does leave something to be desired as none of those listed was on any All-pro list for the seasons mentioned.  Edwin Bailey's 1984 season is also an honorable mention
Jacob Green had a career-high 16 sacks in 1983 and was a SN First-team All-Pro, but we went 1985 when he had 2 touchdowns (one pick-six and one scoop and score, 13.5 sacks and seven forced fumbles). The other defensive end is hard because there are four seasons that are very, very close. Jeff Bryant, was the right defensive end in a 3-4 defense and totaled 14 sacks in 1984. However, the Seahawks did go to a four-man line on passing downs with Mike Fanning (7 sacks, our second-team nickel rusher) coming in and Bryant moved to tackle. Michael Bennett's 2015 season (52 tackles, 11.5 stuffs, and 10 sacks and a SI All-Pro pick) is the one left out, but this is one that could be rethought but for now, he's an honorable mention.

It was just too fitting to put the "Michaels" on the Second-team. McCrary first season and the "high motor" end  1996 when he had 13.5 sacks. Sinclair was a smooth pass rusher, toutored by Jack Youngblood when he was with the Sacramento Surge in the WLAF, led the NFL in 1998 with 16.5 sacks, and had six forced fumbles. Chris Clemons's 2011 season is an honorable mention. Rufus Porter is also a Second-team an edge nickel rusher (tied with Fanning) for his 10.5 sacks in 1989.
Cortez Kennedy wad the Defensive Player of the year in 1992, a Consensus All-Pro, had 14 sacks and 14.0 stuffs. It was an easy selection. Joe Nash could have had 1985 picked as well, but in 1984 he got All-Pro honors and rushed well for a nose tackle. Sam Adams is still one of the top two or three quickest defensive tackles off the ball we've ever seen. Brandon Mebane is a supreme run-stuffer who has some rush ability in his earlier years.

Bobby Wagner, Earl Thomas, Richard Sherman all could have any of their recent All-Pro seasons chosen. (with two "Ds") Young was an excellent 3-4 ILBer who was All-Pro in 1987. He said the extra "D" was because he hit hard they stuttered. The Second-team was with Tatupu but the second spot was hard to fill. Bosworth? Uh, no. Keith Butler? Again, no. We finally went Hawthorne, really, based on stats. He led the team in tackles, picked off three passes and had 4 sacks from his Mike position, among the best for that position in team history.

Chad Brown was All-pro in 1998, KJ Wright was great in 2015 and made the PFJ All-Pro team as the best 4-3 SAM backer in the NFL this season. Julian Peterson was a good all-around backer who could rush the passer very well in nickel. Ditto for Rufus Porter, who at 210 pounds, lined up with his hand in the Astroturf at RDE in the Seattle nickel package and had 10.5 sacks and made the Pro Bowl in 1991. Porter was also a dominant special teams player, as was the aforementioned Fredd Young. Those two represent a great era as the Seahawks special teams were the 1980s that the Washington Redskins were the 1970s. They could return kicks, cover, block kicks, year-in and year-out and were the product of Rusty Tilleman who is one of the best special teams coaches in NFL history.
Later special Isaiah Kacyvenski, 2001, and Niko Koutouvides, 2007, both had over 20 special teams tackles in the mentioned seasons and are regulated to honorable mention because of how good Young and Porter were.
Ken Easley was the Defensive Player of the Year in 1984 but was often an All-Pro as well. Chancellor, 2013, is the Second- at strong safety. For Chancellor, 2014 was also considered but he did miss a pair of games. He was Second-team All-Pro and a Pro Bowler in both but in 2013 he had 134 tackles, 4 stuffs, 12 passes defensed and three interceptions so really, the numbers go in favor of 2013.

Folks seem to  how good Eugene Robinson was. In fact, the scouting firm Pro Scout, Inc. him as one of their All-Decade safeties for the 1990s. Very consistent in all phases of the game. We picked 1993 when he had nine picks, 15 passes defensed, 111 tackles, three forced fumbles, two sacks and three run stuffs. He has the backup slot to Earl Thomas whose 2013 was our pick, though just about any year from 2011 to 2015 would qualify.

John Harris's 1981 is honorable mention with 10 picks and two pick 6s that season.

Byron Maxwell's 2013 is the top  Nickel back and Michael Boulware in 2004 is next. Some secondary honorable mentions are as follows: Robert Blackmon, 1996; Darryl Williams, 1997; Ken Lucas, several good seasons as well as Patrick Hunter, in the early 1990s.

At designated rusher, we went with Michael Bennett's 2011 and Mike Fanning in 1984. Randy Edwards had 10.5 sacks in 1985, despite not starting a game. Cliff Avril was a nickel rusher in 2011 and was effective.

Norm Johnson was a consensus All-Pro in 1984 and Josh Brown was Pro Football Weekly's Golden Toe Award winner in 2006.  John Ryan's net average in 2012 was over 40 yards, but for the First- went with Rich Tuten, more of a that a directional kicker, but in 1994 he had 33 punts inside the 20 and only seven , He edges Jeff Feagle's best season. a better punter but didn't have the leg Tuten did. Really, any of these seasons and they could be juggled. 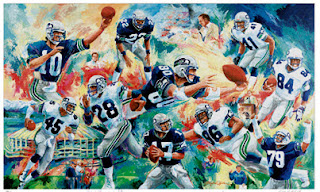