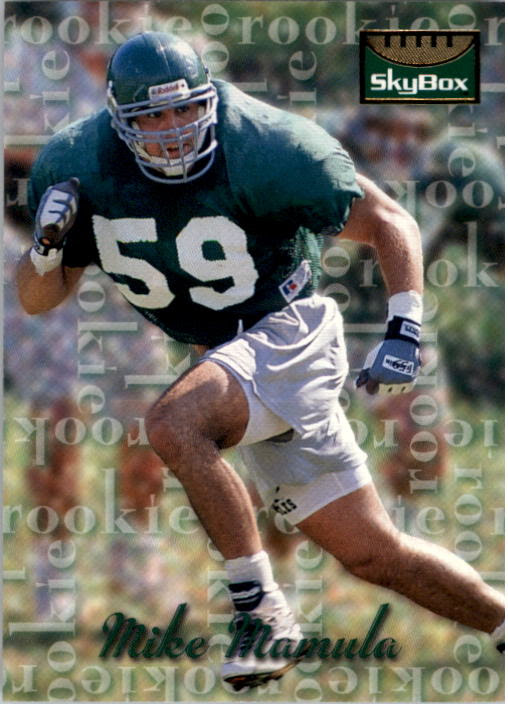 I was thinking of doing a post on this very subject, but Pro Football Talk's Michael David Smith already nailed it in his recent post on the subject. You can read it  HERE. I remember when Smith wrote THIS a few years back and appreciated it as well. Additionally, The Big Lead posted a story last year on the same subject and it was well done.

says he'd heard rumors that he'd be a third-round pick prior to the combine, but from the literature I have scanned that seems lowThe literature of the day suggests he was certainly the late-first round radar earlier than that famous combine performance.  But, the combine boosted his stock tremendously, no doubt. The final draft pre-draft publications (post-combine) by two of the "" of the day, Joel Buchsbaum and Ourlad's had him in their Mock drafts in the middle-of-the-first-round range. I do not have access to Mel Kiper's mock for that year, but I suspect Mamula was a first-round projection in that publication as well.

, Buchsbaum stated that Mamula needed to be used like Charles Haley or Kevin Greene to be productive, noting his lack of ideal size for a defensive end in the NFL. said he projected as a possible outside linebacker as well.

was also a victim of circumstance in that he entered the NFL when it was a 4-3 league after a decade (the 1980s) was was a 3-4 base league. was only about 255 pounds, give or take, and was asked to play every-down defensive end. Had it been a 3-4 league in 1995, he would have played outside linebacker in a 3-4 defense and played defensive end in passing downs, like other great of the day, Andre Tippett, Pat Swilling, Ricky Jackson and many others. If he were to enter NFL today, he'd be like a Conner Barwin, Ryan Kerrigan, or a Terrell Suggs-type hybrid backer-end. As the NFL was in 1995, Mamula had a small chance of going to one of the few 3-4 teams left. Buchsbaum seems to have been pretty accurate in his projection.

Smith details Mamula's career very well. I'd add in a 1995 nugget: five of his 5.5 sacks came against Jumbo Elliott (3 in two games) and Willie Roaf (2 in one game) showing he was not out of his depth in the NFL as a smaller,  rusher. Also, we've posted his career stats, adding in run/pass stuffs and hurries. As the chart shows, Mamula was especially effective in 1996.  In addition to the sacks and stuffs, Mamula, according to the coach's defensive statistics, led the Eagles in hurries in 1996, 1997, and 1999 and was tied for third in that category in 2000.

PFT's Smith rightly points out that injuries got the better of Mamula and forced an early career, not some kind of lack of talent or lack of production.

As for the combine, yes, it was reported to be -dropper. At 6-4½ and 248 pounds Mamula ran a  4.58 forty-yard dash and a 4.03 short shuttle. His vertical leap was 38½ inches and his broad jump was 10 feet 5 inches. He also did 28 reps of 225 pounds in the bench drill and for good measure scored a 49 on the Wonderlic.  was one of the first athletes to train specifically for the combine, doing the exact drills that were to be done, so he was very familiar with the process and had worked those movements into his muscle memory.  It was simply that he and his Boston College strength and conditioning coach  Jerry Palmieri, who was recently let go by the New York Giants as their S&C Coach, knew what was to be expected and had his star train to do well.  As Mamula once said, "What was I supposed to , not do well at the combine". As it turns out, Mamula and Palmieri were simply ahead of their time and trend-setters as all college players "train to the drills" since then.

It can be argued successfully that Mamula was over-drafted, that he was not a talent that warranted being taken that high, but it really cannot be argued that he was not a mid-to-late-first round talent. Thus, if not performing like a seventh overall pick constitutes a "bust" in someone's mind, fine, but to call him one of the "Workout warrior All-time busts" is errant in my view. We have others, such as Vernon Gholston (zero career sacks, 2.5 career stuffs), for that.