History of Uniforms in the NFL by Merv Corning 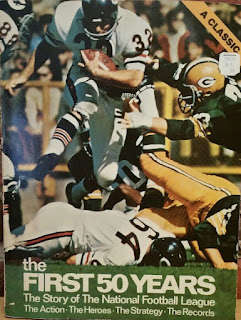 In the book The First 50 Years: The Story of the National Football League there is some really good artwork featured. George Bartell painted the top players in the history of the game and Merv Corning illustrated the history of uniforms in the NFL. After the book was published, Corning added a few players that have only been published a poster, as far as we are aware. So, to complete the series, we added them here. They are Buck Buchanan, Paul Lowe, Ken Anderson, Dan Fouts, and Richard Dent. We are saddened that Corning is not still around to further update this amazing series.

We added a color corrected version of Mel Hein, since we believe that Mr. Corning got the Giants uniform backwards, i.e. where there should have been red.