Rams Oddities in Their Uniforms in the 2000s

In 2000 the Rams changed their colors from royal and gold (yellow) to navy and old gold, what they called "Millennium blue and New century gold". In 1998 they began this process and then, in 1999, after having tied the Bengals as having the worst record in the NFL in the 1990s won the Super Bowl in 1999. Nore: The Rams wore the Los Angeles era unis from 1995-99. 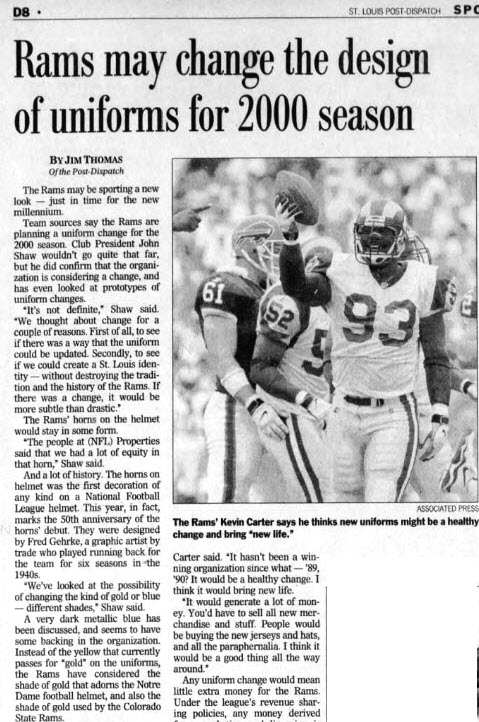 In the Spring of 2000, they displayed their new uniforms and they showed two jerseys and three pants (gold, white and blue) though the blues were never ordered. They featured rounded numbers.


Here are some shots from the St. Louis Post-Dispatch— 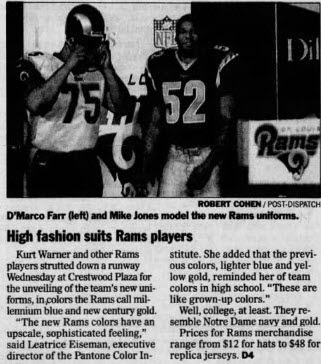 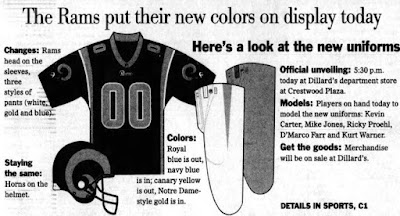 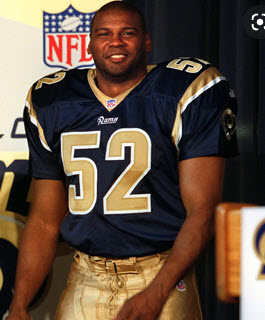 The white pants and the blue pants and a semi-horn stripe that connected a side panel to the pants, supposedly to create a 'Ram horn" look. As we mentioned the blue pants were never even ordered by the Rams and the white ones were only worn once, in 2001, in the preseason.
Another oddity is that in the debut the numbers were rounded, and beginning in 2001 through 2015 (and until they are changed) and are still rounded. But in 2000 they were collegiate-type block numerals.


They happened for one year and according to Todd Hewitt, Rams brass didn't like the rounded one so they ordered the block ones, then didn't like those so they went with the ones that were originally supposed to go with the numbers.


Then, in 2002, the side panel was removed from both the navy and white jersey.—

In 2003, new blue pants was introduced but only worn a couple of times. Things didn't go well and they were scrapped (Mike Martz, the Rams head coach) thought they were bad luck and they were not seen again until 2005 after Martz was no longer the head coach (he was on a leave of absence at the time) and the Rams wore the navy jerseys over the navy pants.

These pants had two gold stripes outlined in white, creating a think blue stripe in-between. Again, it was supposed to be thick to remind people of the Ram horn. We're not sure it did that, the two smaller stripes were more noticeable we think, but that was the intent.
The 2006 season brought white pants with a thick gold stripe outlined with thin navy stripes, again, to remind folks of the Ram horn on the helmet.

After that, it was just a matter of keeping track what combination of the two jerseys and three pants that the Rams might wear on any given Sunday and what patches were on the uniform (which we ignore, that's a job for Gridiron Uniform Database). Except when Nike added the "Nike Flywire Collars" onto most NFL uniforms. The Rams began this look in 2012 and for them, it kind of worked, with the points kins of resembling the tip of a Ram horn. Other teams, it didn't look so great. But that's Nike for you.
But there were oddities in the "1999 throwbacks" which came back in 2009. From 2009 through 2122 they were very true to the old colors. In 2012, though, Nike, being Nike, made the gold color highlighter yellow, while also adding the FLywire collar. However, we suppose there were enough complaints that in recent years they got the original gold-yellow back.

So, other than patches, that is most of what we know about the oddities of the St. Louis-era Rams uniforms. If we missed something let us know.