Who Will Be the Hall of Fame Contributer Nominees for Class of 2017? 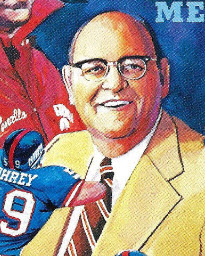 In the Summer of 2014 the Pro Football Hall of Fame added  a separate category for contributors to pro football. They are nominated in a committee process similar to how the Seniors Candidate is chosen. 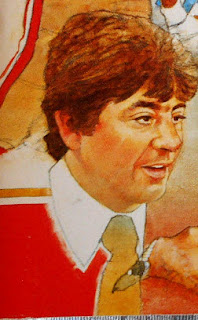 The Class of 2016 was Edward DeBartolo, who was inducted yesterday. The previous year Bill Polian and Ron Wolf were elected.

This year there are two slots available and as per are many good candidates. If one stands out it would be George Young. He's already been a Finalist three times in the previous process which was extremely competitive and difficult for a non-player. Also, his credentials are excellent and certainly deserving of the Hall of Fame. 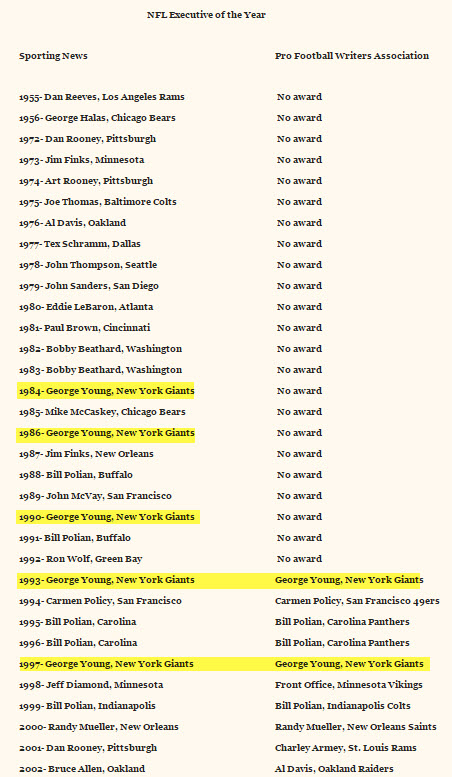 And his leadership of the New York Giants from 1979 to 1997 led to two Super Bowl wins.

His NFL executive career began when the Colts hired him as an aide to Coach Don Shula and assistant coach. Shula later hired Young as the director of pro scouting for the Dolphins, a position he held from 1975-79.

He had a hand in rebuilding the Colts with a good choice of a franchise quarterback in Bert Jones and good defensive linemen Joe Ehrmann and Mike Barnes (Jones and Ehrmann were First-round picks and Barnes was a Second-rounder). The next year he helped in the process of taking John Dutton and Fred Cook. Those two took over at DE and the Sack Pack was born.

Young left before the success of those Colts began, but helped in building the Dolphins defense with players like Kim Bokamper, Larry Gordon, A.J. Duhe, Bob Baumhower, Doug Betters and others.

Of course with the Giants, his track record of taking Phil Simms, Lawrence Taylor, Leonard Marshall, Carl Banks, et al, is well known as the Giants era is the reason he's known as one of in league history.

So, we will know in mid-August who the two nominees are, but it is our view that Young should be nominated one of the two slots.

As for the other, there are names that would fit very well. Bobby Beathard is one. Paul Tagliabue is another. At some point Steve Sabol should emerge, we hope sooner rather than later.

Originally, in the Pro Football Hall of Fame mandate, game officials were to be included in the Hall of Fame. However, few have ever even been nominated, but after some of the GM-types are expect names like Norm Schachter, Jim Tunney, Art McNally and Jerry Markbreit to be considered. However, our guess is that will be a in a few years.

Also, we hope that some names of the past will also pop up like Don Klosterman or Bucko Kilroy. And, and we are not kidding, we would love to see Joe Thomas debated. It would beg the question of if ending your career on a down note spoils the good you did. Thomas was credited with a disaster of a job with  San Francisco 49ers in the late-1970s, which led to the new era of DeBartolo and Bill Walsh. However, Thomas worked with George Young in the rebuilding of the Colts, though it was full of firings and controversy. And what is significant is the job he did with the Dolphins.

Thomas was the first person the expansion Miami Dolphins hired in 1965 and he picked and traded for the players and that led the Dolphins to three consecutive Super , winning the final two. Those names are Don Shula, who he snagged from the Colts, Bob Greise, Larry Csonka, Paul Warfield (who he traded for), Bill Stanfill, Dick Anderson and Jake Scott.

With the Colts, along with George Young, he drafted Lydell Mitchell, Bert Jones, the Sack Pack players, and so on.

Prior to both he was in building the expansion Minnesota Vikings, drafting Fran Tarkenton, signing Mick Tingelhoff, trading for Jim Marshall, drafting a stud defensive end and others who were a major part of Vikings success after he left as those players were top notch through the mid-1970s.

We are not advocating one way or the other, but if, for example Beathard's Ryan Leaf fiasco doesn't affect what he did with the Redskins, why should the Jim Plunkett and O.J. Simpson trade disasters destroy ?

Thomas was known to be difficult to get along with, and was not a warm and fuzzy guy, so we wonder out loud if that's the deciding factor so far.

As for owners, Art Modell has been mentioned quite often, but why does Carroll Rosenbloom's name never appear in the many articles on this subject you can find on the Internet? He was the owner of a team (Baltimore Colts)  won three Championships and appeared in two other championship games (1964 and 1968-SB III).

It has been reported that he was a major part of the AFL-NFL merger and had lots to do with the negotiations with the  networks that brought tons of money to the NFL in the 1960s. He hired Weeb Ewbank, he hired Don Shula, he hired Chuck Knox. It has also been reported that he brought up as the "compromise candidate" for NFL commissioner in 1960. Rozelle is thought by some the NFL's most influential commissioner ever.

Rosenbloom even traded a team another team. In 1972 he swapped his Colts  plus $3 million for the Rams. His Rams teams, from 1972-78 were a very good team, but were not able to win "the big one". They got to the Super Bowl in 1979, after he had passed away.

So, as we've said our preference is for George Young, but realize if it does not happen this year, it will most certainly happen soon.
Posted by John Turney at 1:41 PM