At Pro Football Journal we are trying to pick the best individual seasons in the history of each franchise, which we will continue today with the Colts. By "Career-year" we mean the best performances at each position, with the following rule: Only one season per player per position. For example, here, we cannot pick Johnny Unitas’s two seasons and use both QB slots. 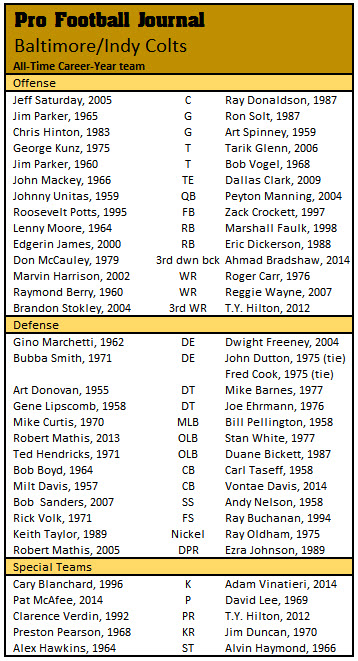 It was a difficult to pick the best season for Marchetti. For example, 1958 would make sense, he was the AP NFL Lineman of the Year he had 43 hits of the quarterback (a combination of sacks, knockdowns and hits) and the Colts won the championship. But, in 1957 he had more sacks. He revolutionized how defensive players rushed the passer in terms of using his hands and in terms of making a counter move to the inside.

He  his pass rush skills and from watching his tape he seemed to get better as he got older. We even considered 1964, his final season for all intents of purposes because he came in in great shape, ran a 4.9 forty-yard dash (which he says was his best-ever) and was a bit bigger than in previous years, approaching 250 pounds. We ended up choosing 1962 when he was a consensus All-Pro and the Colt defense gave up only 3.6 yards per carry and Marchetti had at least 12 sacks and likely 2 or so more.
The other First-team choice is Bubba Smith's 1971 season when he was a  All-Pro had 8½ sacks and was a key player on a dominate defense. He moved to nose tackle fairly often to match up on the opposing center, a tactic developed later by Buddy Ryan for Alan Page and Dan Hampton and for others, including Howie Long. 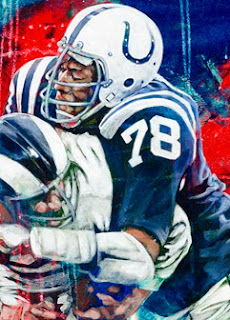 tackles, the First-team is Art Donovan, 1955, a Hall of Famer and Gene Lipscomb, 1958. Donovan was a consensus All-Pro and Lipscomb led the champion colts in tackles with 117, a rare feat for a defensive tackle. Donovan would usually line up in a flex of "off" position and Marchetti and Lipscomb would crowd the line. Additionally, Lipscomb, fairly regularly would line up as a linebacker in a 2-point stance giving the Colts front a 3-4 look. 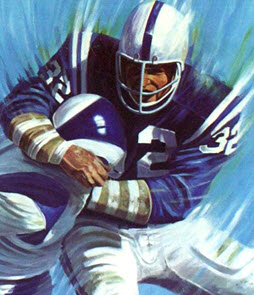 The First-team outside 'backers are Robert Mathis, 2013, and Ted Hendricks, 1971. Mathis was the in a 3-4 defense and Hendricks was the classic 4-3 . Mathis led the NFL in sacks with 19.5 and was a consensus All-Pro. Hendricks was a consensus All-Pro as well and had 68 tackles, 5 interceptions, 4 sacks and recovered a fumble for a touchdown, and blocked a field goal and a punt.

For third-down back we choose Don McCauley, 1979 and Ahmad Bradshaw, 2014. McCauley would also be the short-yardage specialists.


The Colts tradition of guard-in-the-backfield is a bit different in that their recent fullbacks carry the ball more than most teams. We chose Roosevelt Potts, 1995, Zack Crockett, 1997, and gave honorable mention to Albert Bentley, 1989.


For the running went with Lenny Moore, 1964 (1964 NFL MVP) and Edgerin James, 2000.  Moore spent a lot of time as a flanker, but in 1964 he was in the backfield more than in previous years and was a touchdown machine. James narrowly edges Faulk and Dickerson. Team success, in this case, was the deciding factor. 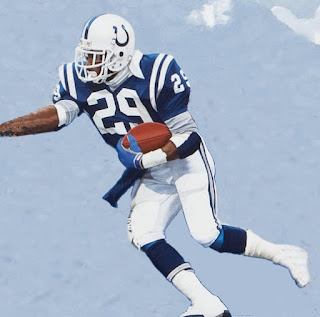 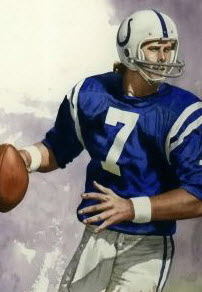 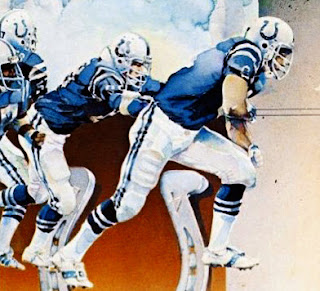 The are centers  Bill Curry, 1971, Dick Szymanski, 1964, guards Dan Sullivan, 1968, and Alex Sandusky, 1964. We also gave honorable mentions to Ken Huff, 1980, John Williams, 1970, Robert Pratt, 1976, none of whom got any post-season honors as did Sullivan and Sandusky, but they performed well and scouts praised them for those seasons. The honorable mention tackles are Chris Hinton, 1988, and Will Wolford, 1995. 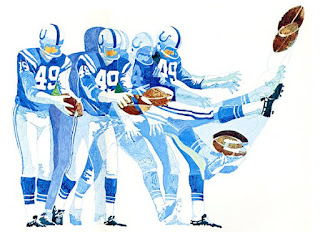 The Colts have had four consensus All-Pro kickers:  Cary Blanchard, 1996, Adam Vinatieri, 2014 Mike Vanderjagt, 2003, and Dean Biasucci, 1987. We could cop out and tie two for the First-team and two for the Second-team because it is THAT close. Vanderjagt didn't miss a kick all season, but since he only attempted one from over 50 yards we dinged him for that. was since Vinateri was 3 for 3 over 50 and Blanchard had the best long-distance season we ordered them (1) Blanchard, (2) Vinatieri, (3) Vanderjagt and (4) Biasucci. Additional honorable mentions were
Raul Allegre,  1983 (maybe should be considered with top four since he made Dr. Z's All-pro team and won four games with late kicks), Toni Linhart, 1976 (Pro Bowl). The Colts had three other performances that were above what good kickers did in their particular era:  Steve Myhra, 1961,  Jim Martin 1963, and Jim O'Brien 1971.

We checked for net, for conditions, and so on. We dinged McAfee and Gardocki for kicking . But, remember pre-1974 players could cover punts (if they chose) before the ball was punted, after that only the gunners and center could go. In 2014 McAfee set Colts single-season records with a 42.8 net punting average (46.7 gross average), 30 punts pinned inside the 20-yard line.

We dinged Gardocki and Stark for giving up quite a lot of return yards. Did they outkick coverage too often? Perhaps, perhaps not, but the possibility exists that they did. That left Garcocki and Stark to the honorable mention list. Lee's coverage teams did an excellent job for did McAfee's.

However, we also had to look at McAfee's extra roles as the holder for All-Pro Vinatieri and also as one of the best kickers in in terms of kickoffs. In 2014 he led in and percentage as he and the Colts allowed only 26 to be returned for 587 yards. As a holder his kicker only missed one kick, so it had to have done reasonably well.

In the end, McAfee emerged as #1, then Lee followed by Stark and Gardocki.

For special we went with Captain Who? Alex Hawkins, 1964, then Alvin Haymond, 1966, Honorable mention is Robert Mathis, 2005, when he had 20 tackles and a forced fumble on special teams. Another honorable mention is Preston Pearson's 1968 as a coverage man. According to Colts coaches he was in on tackles on kicks "about 80% of the time". Additionally, in 1976 Sanders Shiver had 23 special teams tackles. Dave Ahrens, in 1985, had 29 and in 1988 Jeff Herrod had 30 so we include them has special mentions, too.

Agree disagree? us know our errors in the comments section below.
Posted by John Turney at 9:33 PM