At Pro Football Journal we are trying to pick the best individual seasons in the history of each franchise, which we will continue today with the Chargers. By "Career-year" we mean the best performances at each position, with the following rule: Only one season per player per position. For example, here, we cannot pick Lance Alworth’s two seasons and use both QB slots.

Here is the team, First-team on left, Second-team on : 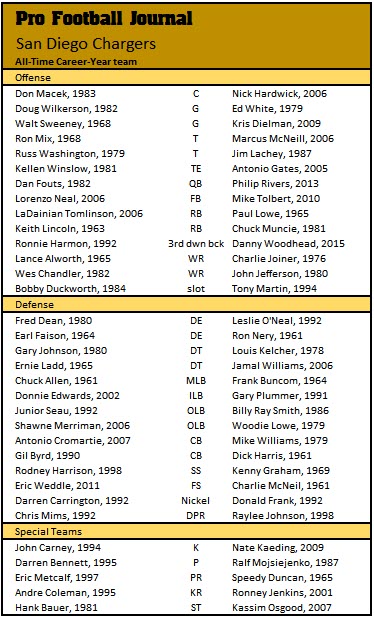 Starting with the , we went with Don Macek over Nick Hardwick. was one of of his era, he was usually in the top 2-3 centers in the NFL according to Proscout, Inc, though he didn't get many media awards, such as All-Pro or All-AFC. Hardwick gets the Second-team nod. Courtney Hall, 1994, and Don Rogers, 1963, are the honorable mentions.

The guards were easy:  Doug Wilkerson, 1982, Walt Sweeney, 1968, though Ed White was a close third in a number of seasons, Kris Dielman, 2009, edged Second-team All-Pro Dave Richards, 1992. Sweeney was called by Merlin Olsen the best faced, year-in and year-out

Ron Mix, 1968, a season where he was not called for holding and allowed just one sack. Russ Washington's 1979 was his best thoughlike Wilkerson and Sweeney and White a number of years would fit. All-Pros Marcus McNeill, 2006 and Jim Lachey, 1987 grab the Second-team nods with

The third-down backs are in order:  Ronnie Harmon, 1992,  Danny Woodhead, 2015 and Darren Sproles, 2010. Sproles seemed like a lock until Woodhead produced so many touchdowns last season. Lionel James is an interesting honorable mention, he was a third-down back, but so much more—and excellent slot receiver who had a 1000-yard receiving season while rushing for over 500 yards. James took the place of James Brooks who had honorable mention season in 1981 (1983 also worthy). When we look at this project again in a few years we may change the order of some of these players, it's that close. 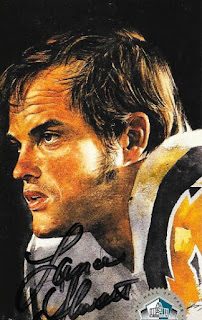 The Chargers passing game is legendary with coaches like Sid Gillman and Don Coryell. They produced some spectacular receiving seasons. The First- are Lance Alworth, for 1965and Wes Chandler, 1982. Chandler's 1982 edges the 1980 season of John Jefferson and Charlie Joiner 1976, was excellent (and he was All-Pro in 1979). However, we think Jefferson was the superior player to Chandler, it's just that the numbers Chandler put up in the strike-shortened season of 1982 are too hard to ignore.

In 1976 Bill Walsh was the Chargers offensive coordinator. Anthony Miller, 1989, Vincent Jackson, 2009, and Tony Martin, 1996 get honorable mention slots.
John Carney, 1994, is First-team kicker then Nate Kaeding, 2009 It was hard to leave Rolf Benirschke's 1982 season to the honorle mentionsbut Carney and Kaeding were a bit better relative to their peers.
irst-team punter goes to Darren Bennett, 1995, and is followed by Ralf Mojsiejenko, 1987. Dennis Partee gets a kicking HM in 1968 and a punting HM in 1969 as he was a dual kicker, handling both the kicking and punter for a number of seasons.

Eric Metcalf, 1997 and Speedy Duncan, 1965 are the top two punt returners and Darrien Gordon's is left the honorable mention slot. Andre Coleman, 1995, is the kick returner and Ronney Jenkins, 2001, is Second-team. Ron Smith's 1973 an honorable mention.

Fred Dean, 1980, Faison 1964 are the top defensive end seasons. Both were consensus All-Pros in their leagues and were dominant players. Dean's 1978 (14-½ sacks, 4 FF) and 1979 would  fit. In 1980 Dean had 10½ sacks and 44 tackles and drew many double teams. Faison could have been chosen for 1961, 1963 and 1965, too. We went with 1965 because he was part of a dominating run defense. He was an excellent pass rusher, and sometimes would play his left defensive end spot from a 2-point stance and was especially good at getting his hands up and knocking down passes.

Gary Johnson, 1980, and Ernie Ladd, 1965, get the tackle slots. Johnson was a consensus All-Pro and had 17½ sacks and 52 tackles and 3 forced fumbles and was voted by the NFLPA the NFL Defensive Lineman of the Year. Ladd was All-AFL and had 6 sacks (career-high was 9½ om 1962, though) and was stout in a top-run defense. Louie Kelcher, 1978, gets one Second-team slot. He had 75 tackles and 9 sacks and was a consensus All-Pro, though in 1977 he had 10 sacks and 108 tackles (10 were ). Nose Jamal Williams, 2005, gets final Second-team slot with his All-Pro 69-tackle run-stuffing performance. Paul Zimmerman of Sports Illustrated  Wilbur Young as one of his All-Pro tackles in 1979 and Young's 70 tackle, 12½-sack performance warranted it. H, he gets an honorable mention.

The middle/inside backers are All-AFL Chuck Allen, 1961, and Donnie Edwards, 2004. Frank Buncom, 1964 and  Gary Plummer, 1991 back them up. Allen was All-AFL in 1961 and had 5 picks. In 1964 Buncom was a consensus Second-team All-AFL middle backer. In 2002 Edwards had 128 picks, returned one for a touchdown, scored another touchdown on a long fumble recovery and deflected 10 passes, and was a Pro Bowler. In 1992 Junior Seau was the NEA Defensive Player of the Year and a consensus All-Pro but he had several qualified seasons. In 1992 he had 15 stuffs and 4.5 sacks among his 102 tackles. Shawne "Lights Out" Merriman, 2006, due to his pass rush prowess gets the other spot. That season he had 62 tackles, 17 sacks 4 forced fumbles, and 8 pass deflections.

Dick Westmoreland was NEA (players poll) All-AFL in both 1963 and 1964. He had no interceptions in 1963, was it because teams didn't throw his way? In 1964 he had 6 picks and recovered 2 fumbles. We are going with that, showing a stat bias. But further research is needed to sort that out and we look forward to doing it. We are giving  HM to Jason Verrett, 2015. Quentin Jammer never seemed to live up  his draft status but in 2012 he put together a good season and scored two defensive touchdowns.
The top two safeties are Rodney Harrison, 1998 (strong), and Eric Weddle, 2011 (free). Their second-team mates are Kenny Graham, 1969 (strong), and Charlie McNeil, 1961 (free and a good tackler). Weddle led NFL with 7 interceptions, was All-Pro and had 88 tackles. Harrison, too, was All-pro had 114 tackles and 4 sacks.

The extra DBs are both from 1992 when Chargers used lots of nickel and dime sub-packages. Darren Carrington and Donald Frank are First- and Second-team respectively. Carrington started only four games, but picked off 6 passes and returned them for 152 yards and a score. Frank didn't start any, only played in sub packages, and pick off four passes.

Agree? Disagree? Let us know in below.
Posted by John Turney at 6:32 PM