BRINGING BACK THE ROAR TO THE LIONS: Gail Cogdill 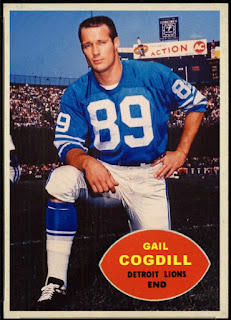 After eight years of successful football, including playing in four title tilts, the Lions had fallen on hard times by the close of the 1959 season. Many areas of the team needed to be improved, yet what easily stands out the most to anyone who followed the league and this team was simply how slow the receiving corps was. 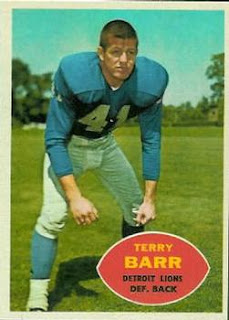 Purchasing Topps football cards in the Autumn of 1960 got a card of Terry Barr; and of course his position is listed as defensive halfback. Watching the Lions play was puzzled since he was playing flanker (which he also did during the second half of '59). Barr as swift and athletic as he was could not do it alone.

The draft in 1960 brought in Washington State end Gail Cogdill, and he was voted rookie of the year for his performance. He was consistent (caught at least one pass every game), and skilled at every facet of playing receiver. We cannot always go by what is written, yet during this story there will be many quotes. The first comes from Don Schiffer's Pro Football Handbook; "Rookie of the year honors were won handily by Gail Cogdill, the speedy offensive end with the educated hands". This statement speaks volumes.

The Lions were again contenders in 1961 and film study shows that Detroit often went into a "trips" formation they called "Zephr". The concept was to align three receivers to one side of the field, and station Cogdill alone to the other side of the formation so he would have man coverage. This is a single back formation with fullback Nick Pietrosante behind the quarterback.

Very few corners could handle Cogdill one-on-one. Additionally, he was able to practice his skills against the greatest corner of all-time in Richard "Night Train" Lane. The 8-4-1 Lions end the 1961 season at home against the defending champion Eagles, and they are also contending for a division title. Sonny Jurgensen tied Unitas touchdown pass record in this game (32 in a season) as the Eagles win 27-24. Cogdill is hardly mentioned in the postgame write-up even though he caught 7 for 171 yards, and the longest touchdown of his career. His speed in going deep is showcased on this play.

Playoff Bowl victory in tow the Lions look forward to the '62 season. I was asked by Steve Sabol years ago who was the best second place team of all-time. Steve believed there were two that stood out; the 1962 Lions and the 1967 Colts. Eventually this creative visionary man evolved this question into the "missing rings" concept at NFL Films.

The 1962 Detroit Lions did not see themselves as a second place team, and their performance against the Packers on Thanksgiving day is indeed one of the most dominating ever in league annuals over a league champion that lost only once. The names of the men who played outstanding football for Detroit in 1962 roll off the tongue, yet the MVP of this team is Gail Cogill. He "beat" both Herb Adderley and Willie Wood for touchdowns in the Thanksgiving massacre, and followed up the next two weeks with 11 catches for 240 yards.

He could run every route with precision, was sure handed, and had the speed and long stride to get open deep. His conversation with me years ago detailed how often he was aligned at left tight end and had to block. Lion coach George Wilson wanted a powerful running game (folly on his part), as Detroit should have thrown much more often with Barr, Gibbons, and Gail. Winning their third consecutive play-off bowl is an accomplishment, but being in the championship game is the goal of every team.

Don Schiffer's 1962 handbook on Cogdill states that "He intends to improve his play by viewing game films between seasons, studying his mistakes and those of his defenders". Detroit fails to contend in 1963 though Cogdill again has an outstanding season including a late September performance against the soon to be champion Bears where he caught 4 passes for 119 yards and two touchdowns against a George Allen secondary that stopped many a receiver, but not Gail.

The Street & Smith's publication in 1964 states "Smooth Gail Cogdill a yearly Pro Bowl performer". Going to the pro bowl in the Coliseum to see my football heroes play was a joy for me and my dad; and as such saw him play in person against the best in the game.

Dave Boss was the creative force for NFL Properties, and a terrific photographer. His up close shot of Terry Barr on the field in the Coliseum on October 31st, 1965 is beginning of the downfall of Detroit. His knee is so injured his career is ending, and now Cogdill must attempt to carry a team that is not near as strong as years previous. 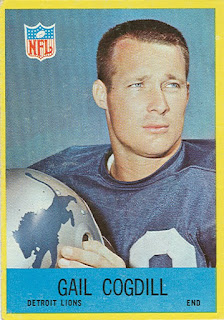 His own nagging injuries have limited his effectiveness, and the numbers bear this out. Ten receptions the second half of the 1965 campaign and nary a touchdown. Street & Smith's Western Conference prediction for 1966 is for 7th and last. The following quote tells us even more " the receiving picture is murky, and public speaker Cogdill's future is necessarily uncertain".

Gail spoke out concerning the lack of direction and the flawed offensive game plans. The quarterback position in Detroit is now handled by Karl Sweetan, and he would never be ranked in the top half in the league, let alone elite. He can throw short; thus Cogdill catches many short passes in 1966.

His last 100-yard receiving game was November 1st of 1964 when he destroyed the Ram secondary at Tiger Stadium. Should he have spoken out? Our conversation touched upon the topic, but my main question was simply how long till you were going to wear another uniform.

Don Shula thought enough of him to bring him to Baltimore in '68, but his mainly depth in case of injury to one of the starters. Gail was a terrific storyteller, and his retelling of his days with Norm Van Brocklin in Atlanta were hysterically funny. The Dutchman wanted no mistakes, and Gail though at the end of his career played error free football as a Falcon. Cogdill played consistently during 1969 as Atlanta became one of the most improved teams in the league.

NFL Films, for many years, had a television segment called "Game of the Week" and on October 4th of 1970 the Falcons beat the eventual Western Conference champion 49ers 21-20 as Gail caught the winning touchdown pass on a flawlessly run route.

Today would have been Gail's 80th birthday, and he is missed by so many, especially his daughter Kristen and his former teammates. Was honored to have seen you play Mr. Cogdill, and you are not forgotten.
Posted by TJ Troup at 7:22 AM