Lions Show Their New Uniforms for 2017

UNIFORMS
By John Turney
Last week the Lions unveiled their new uniforms. We have not had a new uniform in the NFL for a couple of years so it's fun to take a look at these.

They are not offensive in terms of colors or numerals (fonts, see Buccaneers) or lettering telling you who they are (see Cleveland Browns). But there is enough wrong to give then a passing, but not good grade. To us, they are a "C".

The blue, which is supposed to be 'Honolulu blue" according to Lions tradition looks different. With Internet photos, it is sometimes a trick of lighting and digital photography but the old uniforms test out as a "moderate blue". The new ones test out from a color sample to something with more of a turquoise hue.

It will be hard to compare until we can see both on the field. Here are the 2003 uniforms on the day of their release and the new once released last week. Maybe you cannot see a difference in color. We can. 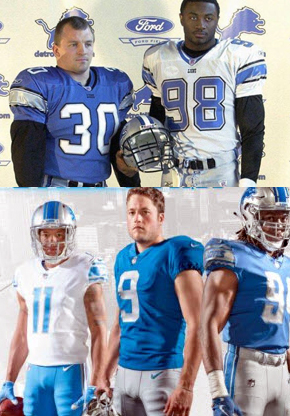 As far as design what we don't like is the Northwestern stripes on the helmet and pants. It just has never been done and doesn't work for us.

The all grey alternate is like the Seahawks alternate. As long as it's seen only once in a while, it's fine but if it ever became a full-time road uniform, it'd be a problem. Just too boring, not enough contrast to be interesting.

The uniforms, according to the Lions release are the Nike Vapor Untouchable uniforms and weigh just 20.4 ounces and repel water and have improved ventilation. Lions tight end Eric Ebron said the uniforms feel "fantastic.”

As usual Nike's website has a news release and here is the takeaway—Nike was instructed by the Lions to "pay respect to the tradition and the heritage of the team but do it in a modern way."

It seems over the years we've heard that a lot. Sometimes it rings true, others it doesn't.