LOOKING BACK
By John Turney
Sometimes a player gets off to a tremendous start to an NFL season and then sustains an injury mid-season and that season, remarkable as it may have been, is lost to history. Other times a player may be able to join a team late in the season, perhaps they had been injured the previous year and are healthy for a stretch of a season. These seasons rarely result in a player getting post-season honors like All-Pro or Pro Bowl and for good reason, it's almost always better to chose a player who played the majority of a season than someone who played less than two-thirds or who played half.

Here is a table of some seasons that fit the above profile. We went back to the 1960s and will do a separate post about the pre-1960 era at some point. The highlighted column is the respective player's yards projected to a 16-game season. Also note that three of these—Gale Sayers, Floyd Little and Barry Foster all WERE Pro Bowl selections for their seasons on the table. 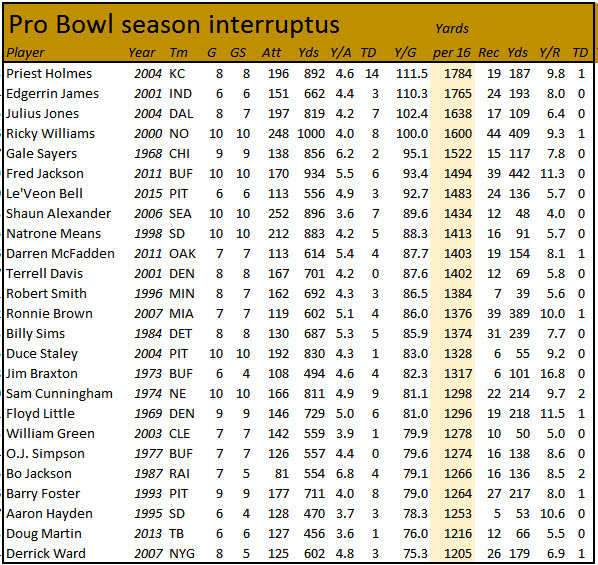 Priest Holmes and Edgerrin James were off to potential career years in 2004 and 2001 when felled by injury. Ricky Williams was on pace for a 2000-yards-from-scrimmage season in 2000. Terrell Davis was on pace for a 1400-yard season in 2001 and Billy Sims's devastating knee injury in 1984 was the end of his career. Fred Jackson, in 2011, might have cracked the 2000 total yard barrier as well.

One historical question:  Had Jim Braxton not been hurt in 1973 would O.J. Simpson carried as heavy a load as he did and not gained his 2003 yards? Braxton was off to a fabulous start averaging 4.6 yards a carry

we cut this list off at 75 yards rushing per game, so the season total would project to 1200 yards. Certainly, there are lots of seasons that would likely have been 1000-yarders by running backs had we cut that off lower. Maybe next time we'll do that.

Hat tip to Pro Football Reference for the search engine that helped in this project.