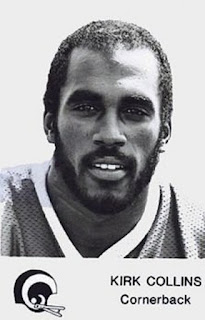 During this project, we learned quite a bit, but one specific thing was we'd not noticed that Mel Renfro (1967), Larry Wilson (1965), and Lem Barney (1975) all missed significant time. All three had good interception totals and all three DID make the Pro Bowl. As did Ed Reed in 2010 and Sean Taylor in 2007 but those two we knew about. Wilson and Renfro were on pace for double-digits in picks. We'd also never noticed that Bobby Bryant missed four games in 1969. 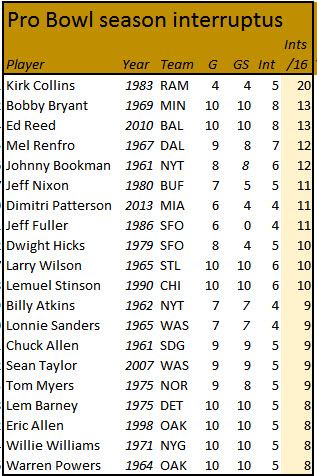 Atop this list is Kirk Collins a player who earned a starting position in 1983 after a couple of years playing special teams and some dime back. He picked off five passes in four games and while returning one 58 yards he pulled a hamstring. While being examined by doctors, routinely as it happens, a tumor was discovered in his throat. That turned out to be malignant cancer and it ended his season. And his life. In 1984 the Rams wore a sticker of Collins's number on their helmets as a tribute to him. Had this odd turn not happened he may have been able to reach double-digits in picks if he'd pilfered just five more over the next 12 games. Likely teams would have thrown away from him as he established his bona fides so he may not have had the opportunity, but teams kept throwing Lester Hayes's way in 1980 so who knows?

Jeff Fuller only played six games and was a hybrid nickel/back linebacker type player. In those six games in 1986, he picked off four passes and had 2.5 sacks. It would have been great to see a sub- defense player making those kinds of plays for a full season. He was on pace for 11 interceptions and 6.5 sacks.

Chuck Allen was a linebacker and if he'd finished the season on the same pace he'd established in 1961 he'd have totaled 9 picks which would be a record for linebackers. (In this exercise we grouped defensive backs and linebackers together).
Posted by John Turney at 12:26 PM