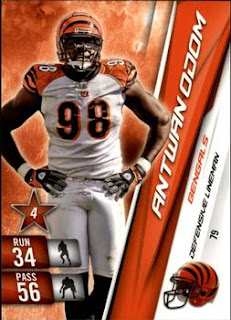 Certainly, we cannot know what Antwan Odom might have done had he been able to finish the 2009 season. We are not suggesting he would have reached the 21½ sacks he was on pace for, but we are suggesting that had he played in the final ten games he likely would have sacked opposing quarterbacks with enough frequency to warrant a Pro Bowl selection. Would he have had 12? 15? More? Eight sacks in six games a five-sack game against Aaron Rodgers was causing Odom to gain some national attention. However, an Achilles injury scrapped all those possibilities and ended Odom's career, though he came back in 2010 he was not the same and he was released by the Bengals and no other team signed him.
Robert Young is in the same boat as Odom. He had a fast start in 1993 and then a knee injury finished his season. Again, it's not likely Young would have had 18½ sacks, but certainly, double-digits were possible. He came back in 1994 and started all 16 games and had 6½ sacks, fewer than the season before in ten more games. In 1995 he lost his job to Kevin Carter and was relegated to a backup role and got a shot with the Oilers in 1996 and he started the entire season and had 4 sacks, It seems 1993 was his chance to break through but a knee injury ended that.

Mark Gastineau, in 1988, was having a comeback season of sorts when he abruptly retired. He said it was because his fiancee had cancer. Gastineau was leading the AFC in sacks with seven in seven games at the time (he'd only had 6½ in the previous 25 games) and the Jets were pleased with his performance. The poof, he's gone. There were rumors that he'd tested positive for steroids and that a suspension was looming, though never proven in terms of a specific test in 1988 but Gastineau has admitted to steroid use during his career. To be fair, Gastineau was not alone in steriod use among NFL linemen in that era.

Osi Umenyiora and Cameron Wake have garnered plenty of honors in their career and 2011 and 2015, respectively would have added one more Pro Bowl to those honors had they not been felled by injuries.

We've listed some other potential Pro Bowl-type shortened seasons, though not all were dominant they held reasonable chances for post-season honors.
Posted by John Turney at 12:05 PM