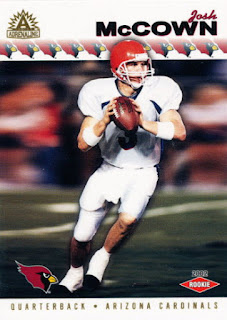 As a follow-up to the running back post we now add recent quarterbacks. To qualify a quarterback had to average 220 yards a game and start a minimum of five games. We are posting a table of the top 20 (sorted by QB passer rating) and added in Andrew Luck's 2013 season.
(Click to enlarge) 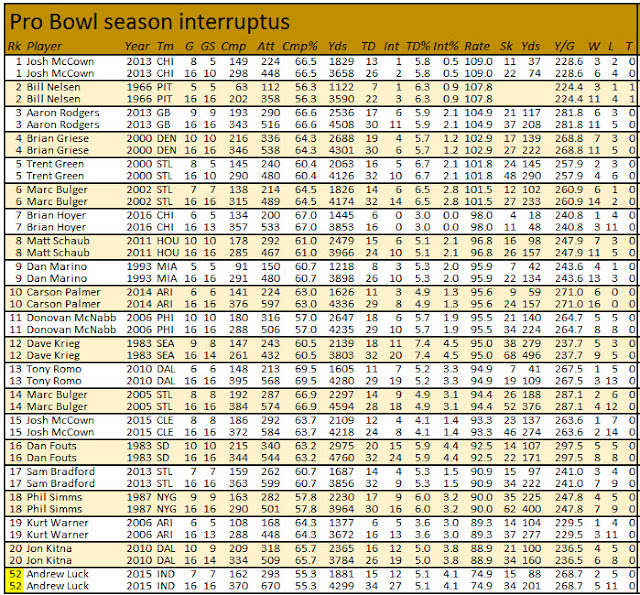 Josh McCown has his 2013 season with the Bears and his 2015 Cleveland Brown season on the list at number one and number 15. Bill Nelson, the Steelers QB had some really good numbers. We tweaked his W-L record and it would have been nice to see what he might have done in a full season.0

Aaron Rodgers's 2013 season would have likely been a typically great season and it should be noted that Brian Griese's 2000 season did result in a Pro Bowl selection.

Marc Bulger was very good in 2002 filling in for Kurt Warner. Not only did he put up numbers he was highly rated by Pro Scout, Inc as a "high blue" for his efforts. Trent Green, in 2000, also filling in for Warner also put up excellent numbers but didn't garner the wins that Bulger did.

Dan Marino's 1993 Achilles tendon rupture stymied what was likely going to be a typical Marino season. The same can be said of Carson Palmer's 2014 season.

Dave Krieg's 1983 partial season was very similar to his 1984 full season. Kreig was not injured, he came off the bench to lead a solid Seattle team to the playoffs and one game away from the Super Bowl. Dan Fouts missed six games in 1983 and like Griese was voted to the Pro Bowl by his peers. Sam Bradford was off to a good start in 2013 when he tore his ACL for the first time. He tore it again in 2014 and was shipped off to Philadelphia.

The final 20 is rounded out by Phil Simms, Kurt Warner and John Kitna. For comparison sake, we added Andrew Luck.

We will be taking a closer look at this and adding players who had good half-seasons in the era where it was not common to average 220 or even 200 yards a game. It will take more than a quick search on Pro Football Reference.com (who we thank for their tools) due to some QBs playing in 14 games because they were the holder but only quarterbacking in, say five. (Think Sonny Jurgensen)

So, we will do further posts covering the "dead-ball" era in NFL passing. One note is that it shows how special Bill Nelson's partial 1966 was, to make it onto this list.

Here are the rest who average 220 yards a game or more, again, sorted in order of passer rating and with the projected 16-game totals.
(Click to enlarge) 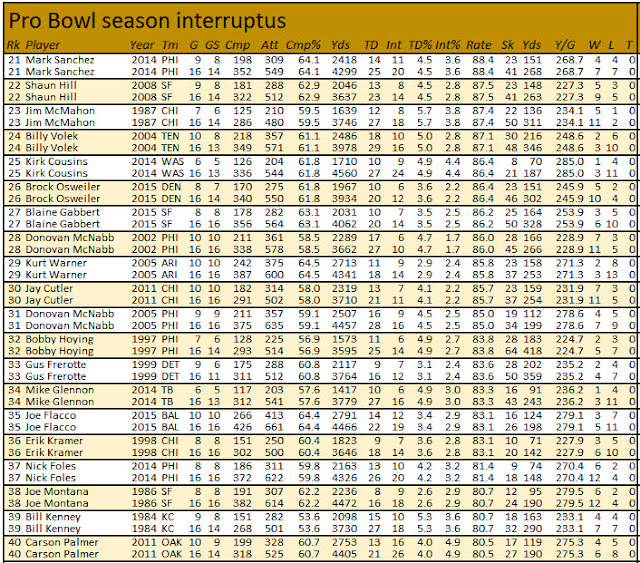 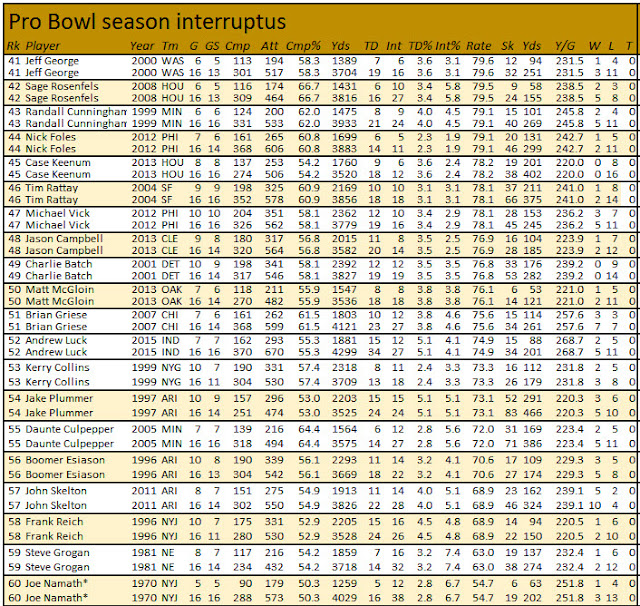