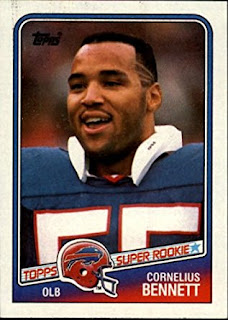 Cornelius Bennett began his rookie season late due to a holdout. He was drafted by the Colts but did not sign. He was involved in the Eric Dickerson three-team trade and ended in Buffalo. He played in eight games and recorded 8.5 sacks and forced five fumbles. It was as impactful a season as a rush backer could have. (Lawrence Taylor had 9.5 sacks in 1981 in 16 games). Bennett played more of a hybrid role, some as a traditional 3-4 linebacker, some as an inside linebacker and usually was the left defensive end (opposite Bruce Smith) in the Bills nickel defenses.
Mario Williams had been moved to OLBer in 2011 and was off to a good start before he was hurt and missed the final 11 games. He was also a defensive end in the Texans nickel in a hybrid role in Wade Phillips's defense.

Kevin Greene was a nickel rusher in 1987 though he'd also spell Mel Owens and Mike Wilcher, the starting 304 outside linebackers. Owens, in 1988, was a big part of the Rams "Eagle 5 LBer defense" playing, essentially the spot Wilber Marshall played when the Bears used their famed 46 defense.

Otis Wilson and LaMarr Woodley were on pace for possible career highs in 1987 and 2011, respectively. We included all seasons that projected to eight sacks or more. Some may have been enough to be a Pro Bowl season for the respective players, some not, depending on the competition year-to-year. Urlacher, of course, was a middle 'backer and Adalius Thomas was a multi-role player for the Patriots. Chad Brown made the list twice, in 2002 and in 1995. With the Steelers, he was unique as a rush backer. He'd play inside linebacker in the base and right defensive end, with his hand down in their nickel. Johnie Cooks was supposed to be a Lawrence Taylor-type player, but never measure up to those lofty-standard (who did?) although he had good seasons in 1983 and 1984.
Posted by John Turney at 12:46 PM