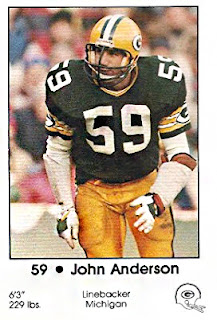 John Anderson was a Second-team All-Decade selection on the All-1980s team. He got one vote. We are guessing that vote came from the Green Bay voter but we don't know that for sure.

We are dubious of his All-Decade selection but we are not dubious that he was a good player because he was. Aside from the All-1980s thing he was All-Rookie in 1978 but was never invited to a Pro Bowl or made an All-Pro of All-NFC team. But he was considered a solid run stopper and a SAM backer who could drop into coverage and be effective—something not all linebackers can do.

Joel Buchsbaum, in 1987, said Anderson was the "most underrated linebacker in the league" and that "He's just a very efficient player who strings out the sweep and does a nice job in coverage".

In the mid-1980s Anderson would rank in the bottom half of Buchsbaum's top ten, in 1982-83 he was called the top strongside linebacker in the NFL. One year he was on the third-team preseason All-Pro team. His "honors" consisted of mostly things like that.

It was just an era, to be All-Pro, you had to beat out Lawrence Taylor or Andre Tippett or Rickey Jackson and that is hard to do when you were a run stopper/coverage backer rather than the sack-happy rushbackers of that era.

As a rookie, on the right side, he picked off five passes and forced three fumbles. He then broke an arm and struggle to get on the field in 1979-80. In 1981 he began to establish himself as the player he became recording 103 tackles (5.5 were behind the line of scrimmage). In 1983 he again picked off five passes, taking one to the house and recording 113 tackles (we use the tackle totals from the gamebooks, not the coaches totals that vary in how they are kept from team to team).

Fron 1982-95 is when Anderson got notice from scouts and from Buchsbaum's reportage. In 1986 he was felled by another injury but closed out his career well, especially in 1980 when he had 6 stuffs, plus 4 sacks and picked off a pair of passes.

In all, he totaled 22.5 sacks and 25 picks, similar numbers to players like Dave Robinson, Chuck Howley, Phil Villapiano, and others. 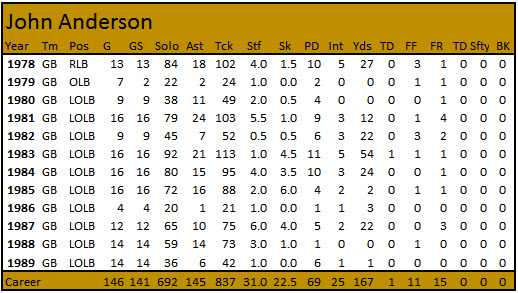