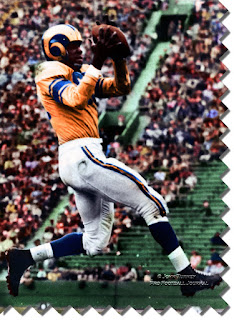 Much has been written about Night Train Lane—His life and his exploits in the NFL. He is to be commended for what he overcame in his childhood, and his belief in himself as an athlete. Many times I have used the line "film study tell us" and today again will detail observations of him and the teams he played for.

The Rams right safety Herb Rich, in early 1952, ranked among the leaders in interceptions. Rich had 6 after four games (twice pilfering 3 Lion aerials). During the 24-16 loss to the Lions on October 16th Lane intercepted the first pass of his career. He would intercept 13 passes the next eight weeks! 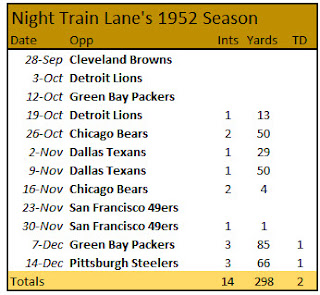 Los Angeles righted their ship and won down the stretch to earn a playoff berth for the fourth consecutive season. Watching Lane, he is quick, decisive, and at times explosive in defending the run from his right corner post. The best example of this is when he tackles Eddie Macon of the Bears for a safety.

Why quarterbacks continued to throw against him will be questioned forever but no doubt they either did not realize how gifted he was or he had already learned how to "bait" passers. To wit, how many players steal three passes in back to back weeks to end a season (in must-win games) and help take their team to the playoffs?

Film study (yes, that is what I relish doing) in 1953 shows a subtle change in his style. Lane moved up to almost the line of scrimmage when the left offensive end was aligned near the offensive tackle. He would allow a clean release by the end, and stride down the field with the intended target—but rarely now did teams throw to his man (he did not intercept in the first seven games of the season).

Though Lane only intercepted three passes in 1953; he made one of the best plays of his career:  Fred Cone of Green Bay attempts a 25 yard field goal, and the "Night Train" dashes in and blocks the kick and the ball bounces back towards midfield and beyond, and when Lane grabs it, he scores (listed as 30 yard return). 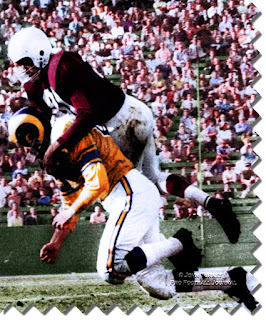 In 1954 Ram management takes part in a three-team trade that serves two teams well. Don Paul (defensive halfback goes from the Cardinals to Washington), but he refuses to report, and thus he winds up playing excellent football for Cleveland for five years. Los Angeles does not get near in return who they "gave" away. Joe Stydahar needs as much help as he can get in Chicago as the Cardinals are the least talented team in the league. Jumbo Joe will get Ollie Matson back from the military for 1954, and now again has Lane.

Arteburn, Breede, Brosky, Kingery, Crittendon, Kinek, and Oakley—who are these guys? They all attempted to play in the secondary for the Cardinals during 1954, and all will have very short careers.

The Night Train begins the season starting at right safety, but he is moved to left safety in week two on a rotation basis with Matson. Lane is basically the right safety the first half of the year and intercepts opposing passers four times. Since the above mentioned players have struggled and failed, off the bench comes future Hall of Famer Charlie Trippi to play right safety, and first Lane goes to left safety, and ends the season playing some left corner (Kinek was the usual starter there).

NFL Films has a segment on the Night Train and there are entertaining stories on him, yet for me his play against Washington in November says it all. He pursues from left safety to his right to neck tie-tackle halfback Billy Wells. The 'Skins halfback ducks under the tackle and takes off goal ward bound for an 88-yard touchdown. Lane will not give up and outruns his teammates to tackle Wells as he crosses the goal line.

Lane ends the 1954 season by intercepting in the Cardinals last five games and begins the 1955 season at left corner and intercepts in his sixth consecutive game. For years the league record manual would list him (along with Will Sherman) as the two record holders with interceptions in six consecutive games. I still have the memo from Elias Sports Bureau stating these two men were not alone in holding the record but the record and fact book would be changed. That is a story for another day.

This story concerns birthday boy Richard Lane. The Night Train plays well at left corner in 1955 and continues as a part-time receiver (his speed and athleticism make him a deep threat). Ray Richards has the Cardinals on the upswing in 1956, and with the valuable assistance of secondary coach Wally Lemm they win for the only time in the decade. Chicago has revamped the secondary and is the best in the league, with Lane now established as the best left corner in the league. Fearless against the run since he relishes contact, and still knifing in front of receivers for the "pick".

The best example is week two when Lane takes an errant Charley Conerly pass for 66 yards and a key touchdown. The Chicago Cardinals are 2-0, but cannot maintain their momentum (they split their last ten games). Opening day 1957 the Cardinals upset the play-off bound 49ers as they open the game in a hybrid nickel coverage. The Night Train intercepts twice early in the year, but is shelved by injuries during the second half of the year and as such does not make the Pro Bowl (he was not chosen for the Pro Bowl in '52 when he set the record, nor was he a First-team All-Pro).

Lane returns to health in 1958 and again is the best left corner in the league. Chicago, under Pop Ivy, is aligned in a double wing offensive formation most of the time; and though entertaining the turnover machine makes a shaky defense very vulnerable. The 1959 campaign is more of the same, yet Lane continues to make quarterbacks pay; even future Hall of Famers as the "Dutchman" Norm Van Brocklin learns early in the year when Lane goes 37 for a touchdown on a pick six.

His time ended in Chicago as he is dealt before the 1960 season to the Lions for Gerry Perry. A trade that no doubt ranks among the worst the Cardinals have ever made. Detroit is back in contention in 1960 and the Night Train has evolved. His alignment at left corner is now playing off turned on an angle towards the quarterback, his thought process—'I want the ball from that man, and have to see him while maintaining outside leverage against the wide receiver my side (usually a flanker)'.

A young Dick LeBeau is learning his lessons at right corner (when he is not moved to left safety due to injury) and in his own way the Night Train had an impact on the youngster with his "triangle vision" of pass defense. The 1961 season is a fascinating one in league history and there will be a rule change due to the Night Train. Jon Arnett swing out the backfield for a pass in Briggs Stadium and Lane, as always is, supersonic in coming up and going high on Jaguar Jon. This famous photo impacted the league, yet have seen other clips of him taking Taz Anderson and Mike Ditka to the deck with head hunting tackles, 'Face mask be damned, you are going down'. Thus, you can no longer grab the face mask to tackle. 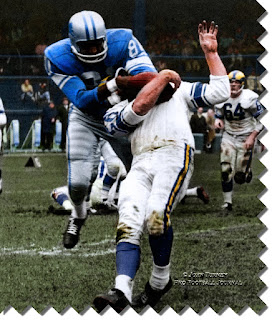 Though he is entering the twilight of his career he continues to intercept in key situations; ask Unitas about his wide side throw in October of 1960, or Bart Starr on Thanksgiving day of 1962. The first half of 1963 he intercepts five times, but his knee needs surgery and the Lions are no longer contenders. How do you replace a man of this caliber? You do not! Aged Jim Hill, and young Jim Kearney attempted to do so until secondary coach Carl Taseff thought Bobby Thompson was ready. Thompson just does not measure up though he is given three years to establish himself. 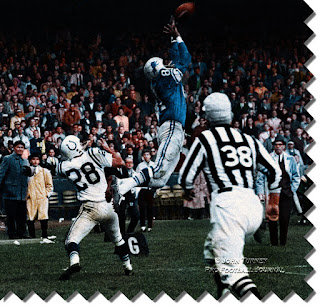 Lane's last interception came against the Colts and Unitas on October 25th, 1964 in a 34-0 blowout loss. The Night Train was even put on waivers, and no one claimed him; thus he returns to Detroit to spend part of the year on the taxi squad. There have been many outstanding corners since Richard "Night Train" Lane retired, yet for me, he is the benchmark to be measured by. His versatility in playing both safety posts, and both corner positions along with his ability to play pass defense and be a force in tackling whether in pursuit or on the "force". Happy Birthday Night Train.
Posted by TJ Troup at 7:48 AM