They Switched the Baby 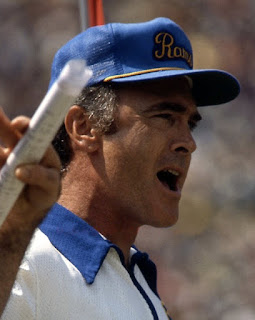 Last night, Chuck Knox's granddaughter, Lee Ann, posted on Twitter that her father had passed away. He was 86 years old and had been battling illness for a long time.

I met Chuck Knox a few times and he was always cordial and patient with my impertinent questions about players and teams he coached.

Jack Youngblood once told me this story—In 1976 during what would now be called a rookie camp Youngblood walked up to Knox who was watching a field full of rookie draft picks and free agents practice. Knox, with his steely gaze set towards the action, muttered to Youngblood, "They switched the baby". Youngblood had no clue what he was talking about, asked Knox what he meant. Knox nodded toward the Rams first-round draft choice Kevin McLain and said "McLain . . . they switched the baby. They told me he was 6-3, 230. He's barely 6-1 and not even 220".

When I met Knox I asked him for more details. He responded that McLain had size 9 feet and Knox knew he would never be a good linebacker with feet that small. "I got stuck with another one in Seattle—Brian Bosworth. He had feet this big", stated Knox. He amplified his point by holding his hands maybe ten inches apart to show the smallness of Bosworth's feet.

Knox, known as "Ground Chuck" for his preference in an offensive style that ran the ball far more than it passed, was well-liked by his players. He was able to turn around three franchises, the Rams, the Bills, and the Seahawks. However, when he returned to the Rams in 1992 he was not able to repeat what he did in the early 1970s for that franchise. He was almost always able to get his teams to the playoffs but never was able to get to the Super Bowl and that has always been the knock on Knox when it comes to Hall of Fame consideration.

In closing here are my picks for a mythical "All-Chuck Knox" team. Most were easy but it got thin when it came to picking punters. 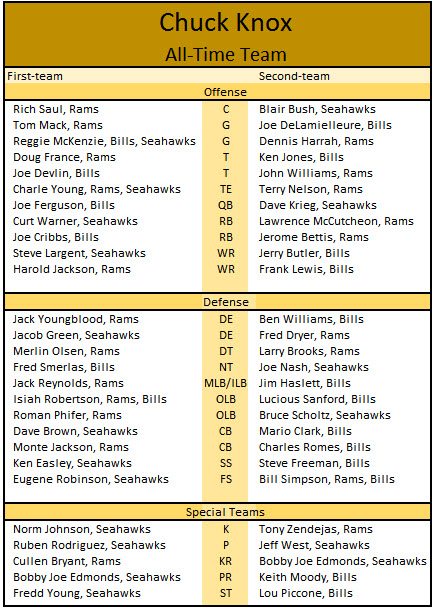