In 1929 Nevers had a game for the ages for the Chicago Cardinals by scoring an NFL Record, 40 points, in a game on Thanksgiving Day against the cross-town Chicago Bears. He scored 6 touchdowns and kicked 4 extra points. The record still stands.

Nevers was selected to the NFL 1920's All-Decade Team and was a charter member of the Pro Football Hall of Fame in 1963.

Over the years only two books have been written exclusively about Nevers. 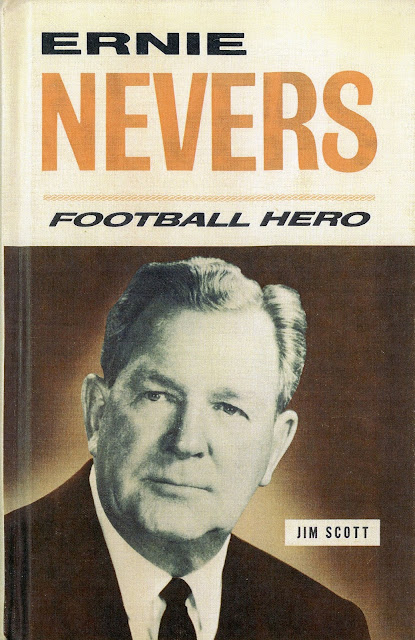 The first was one written in 1968 by Jim Scott as part of the Dension's Men of Achievement Series published by T. S. Denison & Company, Inc. (Minneapolis, MN). The series was for young readers and adults that also had books published about Walt Disney, Carl Sandburg, Herbert Hoover, and Ronald Reagan.

Ernie Nevers: A Football Hero was 175 pages in length, had 13 chapters and featured 9 photos. It was your standard biography covering from childhood to his post-football career. It contained quotes from Nevers, as well as his comtempories such as Jimmy Conzleman:

"Ernie shoots bullet-like passes on a flat trajectory that leads a receiver just right. He also analyzes enemy plays so well and makes more tackles than any other man on the field."

Nevers talks about the current game (1968) and perferring to play both ways:

"I wouldn't care for it. All the clubs have two teams- one for offense, the other for defense. In my days, eleven men were about enough. No, I wouldn't like it. I couldn't stand to spend half the time on the bench." 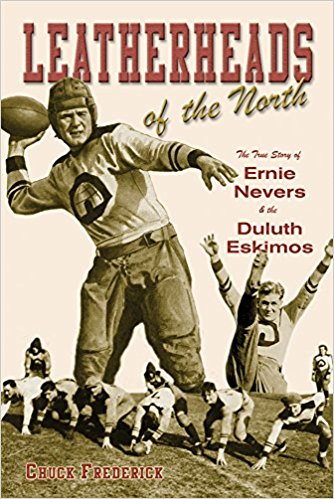 The second book is Leatherheads of the North: The True Story of Ernie Nevers of the Duluth Eskimos. Written by sportswriter Chuck Frederick in 2007, the 176-page book was published by Zenith City Press. This book covers the two years that Nevers played for the Duluth Eskimos, especially the 1926 season when Nevers played 24 games for the Eskimos, a traveling team that went 6-5-3 in 14 NFL games. It was reported that Nevers played 1,714 out of 1,740 minutes on that tour.

Both books are worth the read, but more could be told of this great early NFL pioneer. Happy Birthday, Ernie Nevers!
Posted by cdw83 at 8:42 AM