LOOKING BACK—What If?
by T.J. Troup 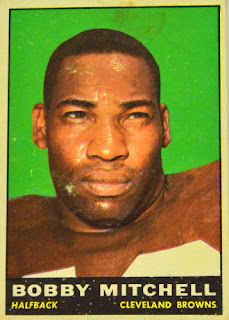 Have always enjoyed writing articles for the Journal, and almost always they are under the title of "looking back". Today will also look back, yet for the first time am stretching out and doing revisionist history. Ready?

Here goes...today is Bobby Mitchell's 83rd birthday, and as one of my favorite players of that era, believe it is time to attempt to bring to life all he accomplished, and what could have happened in his career. Halfback Chet Hanulak struggled during the 1957 season, and Lew Carpenter did not have one of his better seasons. Mitchell is drafted by Cleveland with the 84th pick, and after sparkling in the College All-star game he is ready to help the Browns return to the title game in '58.

Mitchell scored four offensive touchdowns during the year, all in the first four games. Bobby is proving to be a terrific compliment to Jim Brown as he gains 370 yards rushing on just 42 carries in those four victories to start the season. Jack Clary's book "The Cleveland Browns" (Great Teams, Great Years series) he addresses the so-called issue of the fumbles. Though Clary has the number wrong; Mitchell does fumble twice in the mid-season loss to the Giants (both fumbles are recovered by teammate Pete Brewster). These are the only two fumbles by Bobby all year. Mitchell is listed as playing in all twelve games, yet for the next few weeks, he watches Cleveland's commanding division lead dwindle.

November 23rd against Philadelphia Mitchell joins that exclusive group that returns both a punt & kick-off for a touchdown in the same game. Bobby demonstrates he is also a viable option as a receiver out of the backfield, but the second half of the season he gains just 21 yards rushing on 14 attempts. Mitchell has proven he can play at an elite level in his rookie season, but how much will he play in 1959? The Browns put together a five game win streak to push their record to 6-2 and are back in the division race.

The Washington Redskins look helpless in trying to stop Bobby in the two games in '59. In October Mitchell records his first 100 yard receiving game, and in the re-match he has a game for the ages with 232 yards rushing. His style is unusual, and he is both fascinating and interesting to watch on film. Mitchell has blazing speed, yet he "shifts gears" when weaving his way through defenses. Bobby cuts back against the grain, and sure can shake & bake a defender, but when a tackler is about to bring him down from behind...Mitchell finds another gear to elude the defender. 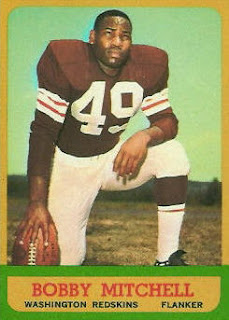 The season-ending victory over Philadelphia is the rare game where Mitchell carries the ball often as he gains 127 yards on 24 carries, and keeps Cleveland above .500 for the campaign. He finishes fifth in the league in rushing as he gains 482 yards on just 67 carries the last five games of the season. Bobby scores the only touchdown for Cleveland on a 78 yard punt return when the Browns are destroyed by the Giants 48-7. He also catches at least one pass in every game. His outstanding season should have garnered a Pro Bowl selection, but did not.

The Cleveland roster is revitalized in 1960 with young talent in the secondary as the Browns bolt out to a 3-0 start. Mitchell gains 254 yards rushing and 152 yards receiving in these three games while scoring six times. Film study shows he follows his pulling guard much better (usually All-Pro Jim Ray Smith), and he is still a speedy, elusive runner with his galloping style gait. The disappointing loss in the re-match with Philadelphia starts the downward spiral as the Browns win just five of their last nine games to finish second. The shoot-out against the Giants 48-34 to close the season is a harbinger of things to come as Mitchell gains 133 yards receiving on 9 catches, and 2 touchdowns. Bobby Mitchell is selected to represent the Eastern Conference in the Pro Bowl. 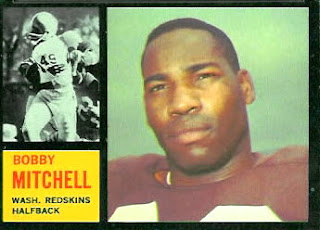 The most asked question in Cleveland before the 1961 season is simple; are the Browns still contenders in the eastern conference? The answer is a simple no. Cleveland wins eight games to finish in third place, and Paul Brown is searching for an answer. Mitchell starts slow in '61 as he gains just 90 yards rushing on 24 carries in the first five games of the year, then in the next two he explodes for 223 on 33 carries. During the eight victories during the season he gains 491 yards on 66 carries, but in the six games Cleveland does not win he gains just 57 yards on 35 carries. He again scores on both a punt & kick-off return (both in victory). Bobby is not selected for the Pro Bowl, and he fumbles a career-high eight times. Stuart Udall under the guidance of Jack & Bobby Kennedy have stated emphatically that the Washington Redskins will integrate for '62. This is where my revisionist history begins.

The Redskins needed an elusive African-American running back that can electrify the crowd. George Preston Marshall and George Halas have known each other for years, and they make the block buster trade. Since the Bears have made running back Ronnie Bull their number one draft choice, and fullback Casares is not the powerful back he once was.....the Bears get Ernie Davis, and Washington receives Willie Galimore. Mitchell is not traded, the Browns struggle all year, and Paul Brown is dismissed. Blanton Collier is a teacher/communicator who has vast knowledge of strategy and schemes both offensively & defensively.

The Browns are contenders in 1963 but no team was going to take the division title from the prolific pass proficient Giants that year. Collier must upgrade his passing attack in '64 and thus Paul Warfield enters the picture. Though many plays and diagrams can be drawn; picture for a moment the following formation: Warfield split left, Collins flanker right(thus tight end is on the right), Jim Brown is single back directly behind Frank Ryan, and in the slot to the left is Bobby Mitchell. The myriad of alignments/formations and plays that can be used by this dynamic talented group is almost never ending.

The NFL in 1964 usually has the right or free safety taking the back out of the backfield man to man or playing deep centerfield. Sometimes in the past teams would go to zone and "roll" the coverage weak to attempt to stop a deep threat split end (Harlon Hill & Del Shofner come to mind). Questions now arise, the responsibilities and alignments defensively when Jim Brown flares either right or left, and is used on a screen play. Mitchell goes in motion from slot left to the right (wide side of the field), the ball is given to Brown on a toss sweep to the right, while Mitchell reverses course, and takes the ball from Brown on a reverse. Who can stop this? Coach Collier would wreck havoc with defenses all over the league. 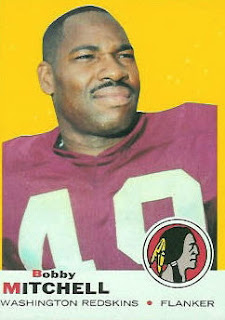 The St.Louis Cardinals relished the blitz and were viable contenders in '64. How often do you blitz, and if you do—who takes Mitchell man to man when he is slot left inside of Warfield? Anyone can do this for hours, and we know the results! The Browns are champions in 1964 and repeat as conference champions in 1965. The second half of the Championship game in 1965 at Lambeau CHANGES. Collier sees that strong safety Larry Benz in his last game as a pro cannot stop Hornung & Taylor. Reading the play-by-play that actually happened—Green Bay dominated time of possession in the second half, and now back to revisionist history. Collier does not let that happen as he outwits Bengston, and  Cleveland defends their title with a 22-20 win at Lambeau (Green Bay was ahead 13-12 at the half).

Jim Brown does not retire because he is still a champion. Cleveland's versatile attack continues to cause problems for Landy and the man to man coverage Cowboys in 1966. The Browns defeat the Chiefs 35-10 in SB I, and the silver trophy today is the Blanton Collier trophy. Ok, back to what did happen. Mitchell IS the Redskin attack for two seasons, and he is prolific as a flanker. His stats speak for themselves. I was able to finally see him play in person at the Pro Bowl in January of 1965 in the Coliseum. Bobby Mitchell has now played in 92 games in his career and ranks 7th all-time in touchdowns scored with 68 (38 with Cleveland & 30 with Washington).

He is joined by Jurgensen, Taylor, and Smith to form a truly dynamic pass offense under Graham. Though improved, this is by no means a complete team. From November 22nd, 1959 through September 24th, 1967 (102 games) the Washington Redskins had just ONE 100 yard rusher. Graham moves Mitchell back to running back and on October 1st, 1967 against long time rival New York. The ten-year veteran pounds out 110 yards rushing on 21 carries, and his longest run is just 16 yards. Amazing, simply amazing the versatility in this man.

Mitchell is eventually moved back to flanker and finishes 4th in the league in receptions. Film study shows he can run every pattern as a receiver, has reliable hands, and is clutch in the "red zone". Early in the game of November 12th of 1967 is where this saga ends. Washington will beat the 49ers this day 31-28 and Bobby gets the 'Skins off to a promising start as he blazes by Pro Bowl cornerback Jimmy Johnson on a streak for 52 yards. James Buckley's book on the top 100 players of all-time has a feature on the 10 most elusive runners. Buckley states that Mitchell #5 on the list "excelled in the open field, often leaving tacklers grasping nothing but air as he headed for the end zone." Mitchell was one of the most versatile players of his generation, and he sure earned his gold jacket.
Posted by TJ Troup at 5:46 AM