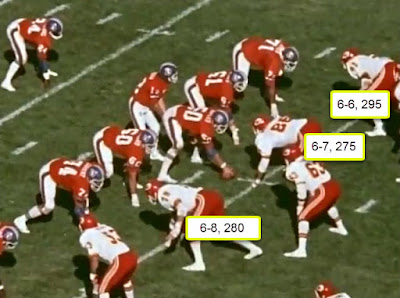 Though the Kansas City Chiefs did not "officially" switch to a 3-4 defense until 1978 they had used it on occasion going back to the 1960s. (The same is true of most NFL teams, especially old AFL teams)


The above shot shows the 1975 iteration of the Chiefs 3-4 defensive package. At left end is John Matuszak who was 6-8 and listed at 272 pounds, but was likely closer to 280 pounds. At nose is Hall of Famer Buck Buchanan and was 6-7 and listed in the 275-pound range. The right end is 6-6, 295 Wilbur Young. Young was listed ar 285 but literature of the day suggests he was likely more than 300 pounds. He was known and a very, very large man

With an average height of six feet seven inches, this is likely the tallest front three in NFL history. Though we have not done an exhaustive search we feel confident in this claim and would love it if anyone can find a front three (or front four) that averages more than 6-7.
Posted by John Turney at 2:01 PM