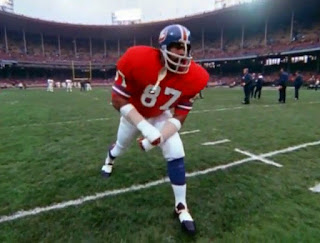 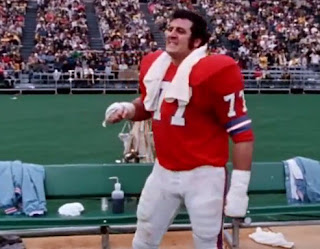 Here are some stills to illustrate that: 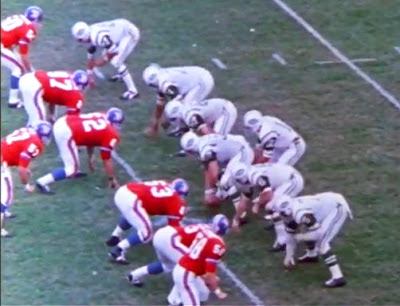 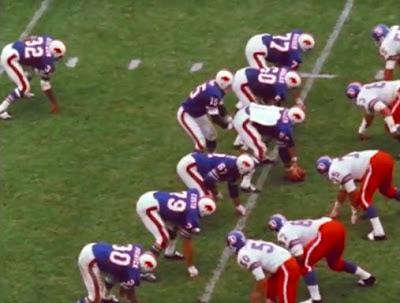 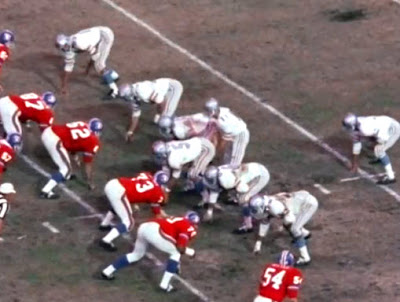 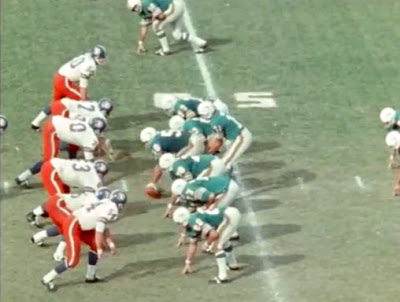 However, beginning in 1970, though, there was more movement. Players were not 100% committed to one spot. They would move around, playing different techniques. Rich Jackson, the best player on that line and he was probably around 70-80% at left defensive end but he could also be found at right defensive end and at left- or right defensive tackle. Same goes for the rest of the line, especially Paul Smith who also was found at all four defensive line spots on occasion.

The defensive line coach in this era was Stan Jones who is no longer around to ask why these moves were made. It does not appear to be scheme related, in that we mean, that players move to fit into a changeup scheme or defense like say, the 1980s Raiders and Bears. The mid-1980s Bears had a base defense which was a 4-3 and the 46 defense and their nickel. Dan Hampton was, in 1985 and 1986, the left defensive end in the base 4-3. In the 46 he moved to defensive tackle lined up over the center, and in the nickel defense, he was a defensive tackle lined up over the left offensive guard.

The Raiders in that era were a base 3-4 and used a nickel and dime on likely passing downs. Howie Long was a left defensive end in the base 3-4 and was the right defensive tackle in the 40 nickel/dime. Also, when they used their version of the Bear/Eagle/46 defense, Long was also over the center, like Hampton.

With the early 1970s Broncos, it does not look like that is what is happening. It might be one of the rare occasions where there was an attempt to get favorable matchups. Whatever the reason, it worked well. From 1970-72 the Broncos sacked the quarterback more than anyone else with 135 sacks leading the Los Angeles Rams who had 132 sacks. The Cowboys were a distant third with 116 sacks.

Also, the Broncos allowed only 115.5 yards rushing per game with only the Cowboys, Colts, Dolphins, Chiefs and Rams allowing fewer. Had Rich Jackson not blown out a knee at mid-season in 1971 it is likely the Broncos would have even topped these numbers.

Here are some shots to illustrate the places the Broncos lined up:

In 1971, the same kinds of things were happening.


In 1972 there were changes to the Broncos defensive line. Dave Costa went to the Chargers and Pete Duranko, who missed the 1971 season with injury took his spot at right defensive tackle and at midseason, Rich Jackson was traded to the Browns.

Starting in 1973 the Broncos began to mix in 3-4 looks with their base 4-3 defense. That increased each year until 1976 when they committed to a 3-4 defense full time.

We will do a separate post outlining that transition.