Happy Father's Day to the First Football Fan I Ever Knew

It’s Father’s Day today, so this Dad had the opportunity to spend a little time relaxing. As many of us who frequent the Pro Football Journal are wont to do, I decided to pass some time watching football film. Today’s choice was the Detroit Lions-Green Bay Packers battle played on October 10, 1943 (won 35-14 by the Packers). As I was watching, it struck me that this game actually has some relevance that went beyond the spectacular color in which this early NFL encounter was filmed.


Two of the combatants taking part in this particular tilt were Detroit quarterback Frankie Sinkwich and Green Bay’s all-world end Don Hutson. While having multiple stars participating in an NFL game is certainly not out of the ordinary, their presence makes it relevant for a singular purpose that might be important only to me. My father Joe was fourteen at the time this game was played, and over the course of the early 1940s was spending his time in and out of hospitals receiving treatment for polio, which was an international epidemic devastating hundreds of thousands of children and adults with paralysis and permanent deformities during the 1930s, 40s and 50s. 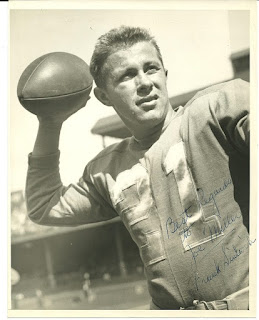 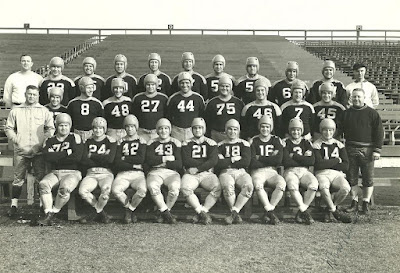 Green Bay Packers, 1943.  Don Hutson (14) occupies
the first seat to the right, front row.  His autograph
can be seen just below his cleats.


To raise spirits and relieve the stress of seemingly cruel treatments and isolation from family and the public, my father began writing letters to various sports organizations asking for autographed photos of the day’s biggest stars. Now, how a fourteen-year-old boy living in rural Western New York, in the grips of a terrible disease and with the country at war, found the energy, the time and resources (not to mention the addresses—remember, there was no internet back then) to write to Notre Dame, the St. Louis Cardinals Baseball Club, the College of the Pacific, Great Lakes Naval Academy, the Green Bay Packers, Detroit Lions and many more, still has me scratching my head. But he did!


I still have many of the photos my father received for his efforts, and two of those are autographed pictures from the two men mentioned above—Sinkwich and Hutson. Getting those photos back in the day was even more special since Hutson had been the league’s Most Valuable Player in 1941 and ’42, and Sinkwich would be in 1944.  Those photos hang on the wall in my office this very day, and they will remain there until … well … forever? They are very special to my family and me, and serve as a constant reminder of the man who introduced me to the wonderful game of football when I was a small boy and took me to my first NFL game in 1971 (Dolphins at Bills, War Memorial Stadium).


So on this Father’s Day, I remember my Dad and the many gifts he gave me, including the love of the game of football. It was a bond we shared, and something that continues to bring me joy as I get older and become more and more of the “the game was so much better in my day” kind of guy he was!  And a belated thank you to Messrs. Sickwich and Hutson, for taking a moment to bring a ray of sunshine into the sometimes dreary life of a young boy suffering through a dreadful disease that has thankfully been eradicated from the North American continent for decades.  You gentlemen may not have realized it at the time, but your gesture meant so much then, and now more than 70 years later continues to bring smiles to that young boy’s family.

And Happy Father's Day to all the Dads out there who gave their children wonderful memories like these!
***﻿


Here is a sequence of stills from the Detroit-Green Bay game of October 10, 1943.  I chose these stills because they show Hutson catching a pass and being tackled by Frankie Sinkwich, the two men who sent the autographed photos described above. 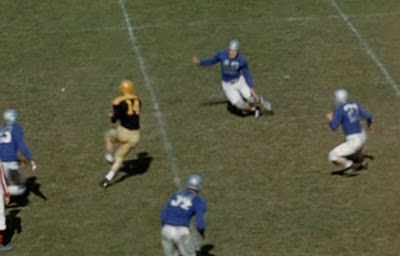 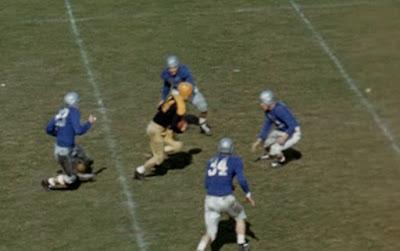 Hutson heads upfield as Sinkwich looks for the
perfect angle. 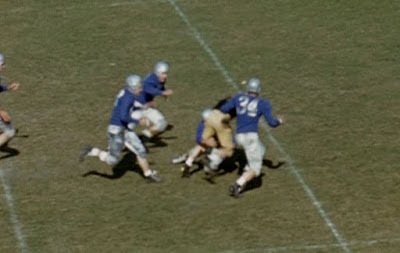 Sinkwich shows perfect technique in taking down the
Alabama antelope. 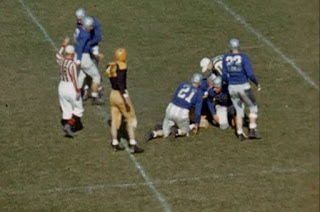