1965 AFL Defensive Players of the Week 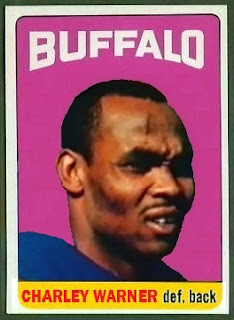 The defending AFL Champion Buffalo Bills picked up right where they left off in their domination of opposing offenses with a convincing opening day win over the eastern-division rival Boston Patriots at War Memorial Stadium.  Cornerback Charley Warner led the way with two interceptions, including one which he returned for a 22-yard touchdown that gave the Bills a 14-7 third quarter lead.  It was all the points Buffalo needed, as they rolled to a 24-7 final. 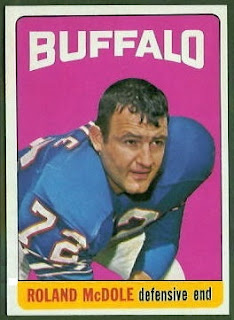 Once again, a Buffalo Bill was the Defensive Player of the Week.  It was a tough call, though, as the previous week’s winner, Charley Warner, picked off thee more passes in another winning effort.  The nod for the AFL’s DPW for Week 2, however, goes to the foreman of Buffalo’s defensive line, six-foot, four-inch, 265-pound end Ron McDole.  McDole was seemingly all over the field in the Bills’ 35-15 romp over the Broncos at Denver, notching two fumble recoveries, six tackles (five solo, one assisted), and a pass defensed.  Behind McDole’s outstanding play, the Bills defense recorded its 11th straight game (10 regular season, one post season) in which it did not surrender a rushing touchdown. 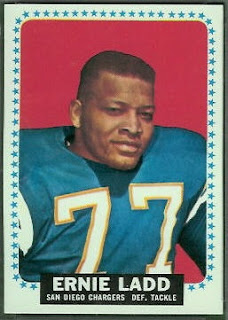 Ernie Ladd, San Diego’s massive defensive tackle (six feet, nine inches, 290 pounds), helped the Chargers remain undefeated after three weeks with a dominant performance against the visiting Kansas City Chiefs.  On the hunt for a third-straight Western Division title, the Chargers entered the game at 2-0, while the Chiefs were sitting at 1-1.  As the San Diego offense struggled to put up points, it was up to the defense to keep the game close.  Led by Ladd’s 11 tackles, including 10 of which were solo (an astonishing total for an interior lineman), and two sacks, the Chargers’ defense held the Chiefs powerful offense in check well enough to allow Hadl and company to match the Dawson’s crew in output, resulting in a 10-10 tie and a half-game lead in the division. 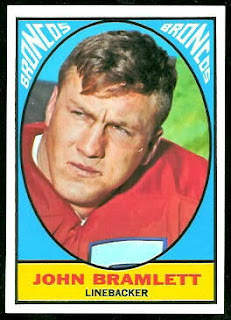 Denver’s rookie linebacker John Bramlett earns this week’s DPW honors for his outstanding play in a tight win over the New York Jets.  Contributing nine total tackles (8 solo), including one in which he sacked Jets quarterback Joe Namath for a 12-yard loss, the man known as “Bull” led a swarming defense that held New York runners to a paltry 65 yards on the ground, and Namath to just 152 yards via the pass (and no touchdowns).   Final score:  Denver 16, New York 13. 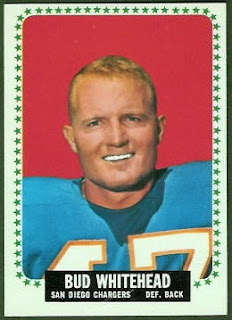 In a rematch of the previous season’s championship game, in which the Buffalo Bills shocked the San Diego Chargers with 20-7 upset win, the Chargers were determined to prove that game was no more than a fluke.  By the time the final whistle blew on this one, the visiting boys in powder blue had laid a convincing 34-3 shellacking on the defending champs, including holding the Bills to a paltry 165 total yards from scrimmage (57 on the ground and 108 via the pass).  The standout performer for the Chargers was safety Bud Whitehead, who picked off three passes, including one which he returned 35 yards for a touchdown.

The win allowed the Chargers to remain undefeated (4-0-1) and in control of the Western Division, while providing Buffalo with its first loss on the year. 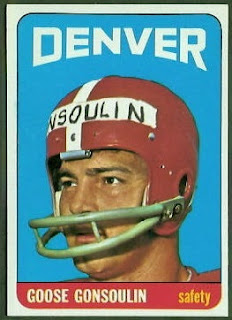 The Houston Oilers visited Denver’s Bears Stadium in Week 6 and found their hosts to be anything but hospitable.  The perennially weak Broncos were in dire straits, seeing their narrow playoff hopes slipping away after a 31-23 loss versus Kansas City the previous week.  Paced by All-AFL safety Goose Gonsoulin’s two interceptions, the Broncos came away with a 28-17 win to improve to 3-3 on year and remain in contention in the West.  The interceptions were the 41st and 42nd in just his five-and-a-half pro seasons for Gonsoulin! 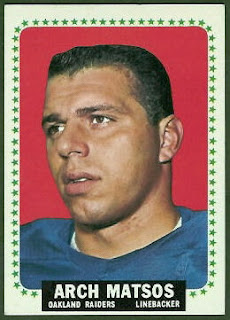 Oakland middle linebacker Archie Matsos, 12 total tackles (including eight unassisted) and one interception in leading the Raiders to a 31-20 win over the winless Boston Patriots at Frank Youell Field.  Paced by the Michigan Stater’s outstanding performance, the Raiders’ defense held Boston runners to just 73 yards on 23 attempts (an average of 2.7 per carry). 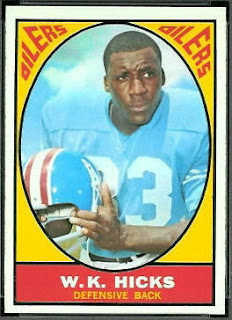 It appeared the Eastern Division-leading Buffalo Bills (6-1) were taking the under-achieving Houston Oilers (3-3) lightly in this contest, and they paid for it dearly.  Led by cornerback W. K. Hicks’ three interceptions, the Oilers were able to take advantage of Buffalo’s arrogance and pull off 19-17 come-from-behind stunner at War Memorial Stadium.  Hicks’ third interception, at the expense of quarterback Daryle Lamonica, set up George Blanda’s game-winning field goal with 8:21 remaining in the game.  The Houston defense did the rest, allowing the Oilers to escape with the narrow victory. 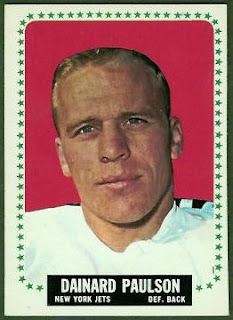 New York’s All-AFL safetyman Dainard Paulson, who led the league with 12 interceptions in 1964, was back to his thieving ways in pilfering two Len Dawson passes to lead the Jets to a surprising 13-10 victory over the struggling Chiefs at Kansas City.  Paulson also recorded seven tackles (six of which were unassisted) and a pass defensed as the Jets improved to 2-5-1 with their second win in as many weeks. 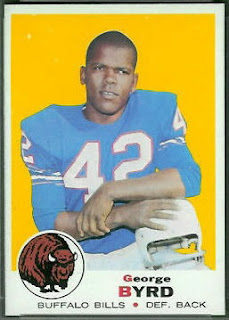 The vastly improved Oakland Raiders came into this contest with Buffalo at a solid 5-3-1 but needing to win to stay keep paced with the Western Division leading Chargers (6-1-2).  Buffalo’s budding star cornerback George "Butch" Byrd, however, was determined to keep his team on the winning track.  The second-year man out of Boston University pilfered two Oakland passes to secure a narrow 17-14 win and earn his first-ever DPO honor.

The Raiders’ loss was a huge blow, though not fatal as far as their playoff hopes were concerned.  Despite the loss, they did not lose ground on the front-running Chargers, who suffered a setback of their own this day by losing to the Kansas City Chiefs.  The Chiefs’ win, however, created a two-way tie for second place with the Raiders, now both sitting two games back at 5-4-1. 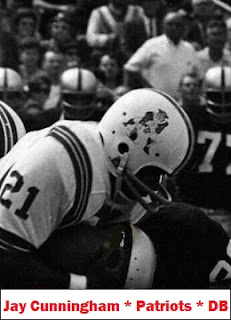 Boston’s rookie defensive back Jay Cunningham had a huge day.  The Bowling Green alumnus played the game of his life in helping the basement-dwelling Patriots (1-8-1) eke out a tie with the visiting Kansas City Chiefs.  The Chiefs were coming into this contest at 5-4-1 and in desperate need of a win to keep pace with the front-running Chargers (6-2-2).  But Cunningham was in no mood to play patsy.  Cunningham was stellar in run support, recording 11 total tackles (seven solo), while his third-quarter interception (the first of his career) at the Boston 2 blunted a drive that could have end with Kansas City extending its lead to 11 and putting the game out of reach. 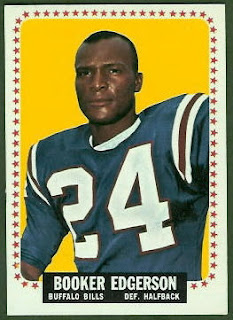 Every once in a while, a player earns Defensive Player of the Week honors not for eye popping stats, but for a singular outstanding play that changes the course of a game, or possibly even a season.  Such is the case with this week’s honoree, Buffalo’s veteran cornerback Booker Edgerson, who made the play of the game, and maybe the entire season, in the Bills’ 20-20 tie with the Chargers at Balboa Stadium.

Trailing 14-10 midway through the third quarter, San Diego quarterback John Hadl hit Lance Alworth on a post pattern that looked like a sure touchdown as he broke clear of the Buffalo secondary.  Edgerson, however, was determined not to let Alworth (nicknamed Bambi for his blazing speed) go all the way unmolested.  After Alworth had picked up 65 yards en route to the Buffalo end zone, Edgerson caught up from behind and forced the Chargers’ star receiver to fumble.  The ball rolled into the end zone and was recovered for a touchback by one of Edgerson’s teammates.

The play prevented a go-ahead touchdown and gave the Bills possession at their own 20.  Moments later, the Bills went up by seven on a field goal by Pete Gogolak.  The teams slugged it out the rest of the way, settling for a 20-20 tie.  But had it not been for Edgerson’s determination, the Chargers would have most certainly sent the Bills home with a loss.  The Bills players felt the game, and Edgerson’s play in particular, provided the impetus that allowed the Bills to defeat the Chargers in the AFL Title Game for the second straight year. 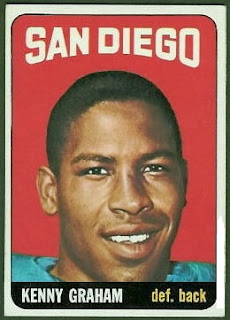 The Chargers, at 6-2-3, entered Week 13 with an ever-so-slight edge over the 6-4-2 Kansas City Chiefs, making this game an unequivocal must-win.  Led by All-Star safety Kenny Graham, the motivated San Diego defense steamrolled the New York Jets and their star rookie quarterback, Joe Namath.  Namath was victimized for three interceptions, including two by Graham, who returned one of those swipes 51 yards for a score.  Graham also registered four passes defensed as the Chargers cruised to a 38-7 win to increase their lead by a half-game over the Chiefs, who were enjoying their bye this week.

Playing for little more than pride at this point, Boston’s star middle linebacker Nick Buoniconti racked up 11 tackles (including seven solo), recorded an interception and blocked a field goal attempt in leading the Patriots to a 28-20 triumph over the Broncos at Bears Stadium. 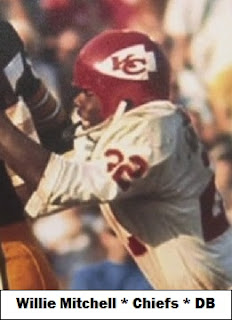 Both teams were long eliminated from playoff contention, but you wouldn’t have been able to tell it by the way Kansas City’s Willie Mitchell performed in the season finale against the Patriots.  Mitchell seemed determined to go out on a positive note, recording nine solo tackles in leading the Chiefs to a 45-35 triumph.  The Tennessee State alum topped off his great day with a 71-yard punt return for a touchdown.