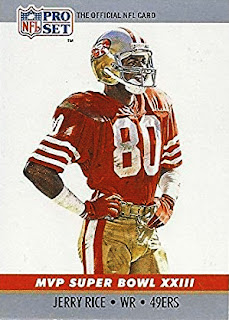 Did Jerry Rice run a 4.7 forty?
Probably.
And most definitely not.
However, one anonymous Reddit posted put this together—

So, we looked into it some more because we posted tangentially on this before.
We found this, a 4.4 in college— 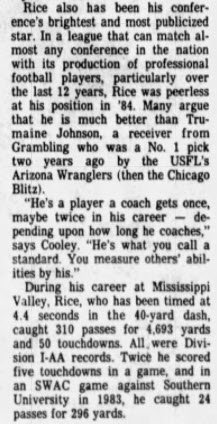 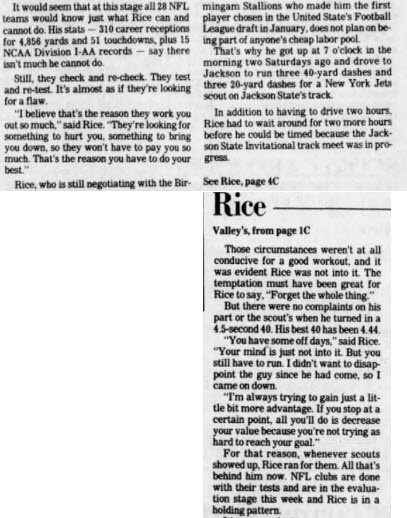 However, most intriguing was his time in the 1987 NFL's fastest man competition—

He ran a 6.344 in a 60-yard dash. In this competition, there are advantages and a disadvantage to a football forty times. The advantages are you start in blocks. You also have other racers to push you.
The disadvantage is electronic timing that goes in on a gun start rather than your reaction. There is a slight reaction time on a gun start as opposed to a hand-time going on your motions. And the hand-timer may be the one with an ever-so-slight lag in starting the clock.
So, how does a 6.3 60 translate to a 40? Hard to say, as we saw on the football field Rice ran away from people in the open field sp he may not have been a fast starter and been very fast in the final 20 yards.
We just don't know without the tape. Some guys explode out of the blocks, think back to the juiced Ben Johnson in the 1988 Olympics. He just blew everyone away out of the blocks, but the long-legged Carl Lewis actually was gaining in that 100-meter race and set the then-world record... but no doubt Johnson was faster out of the blocks, even though there were PEDs involved. We just use that as an example that folks can see on Youtube.
So, is it possible that Rice ran a 4.7 at the combine? Yes. He's said he ran slower at times.
Was that a fair time for him?
No way. That 60-yard time of 6.344 translates to roughly (at worst) a 4.6 forty and at best a maybe a 4.4 or so.
Calling him a 4.7 forty is wrong. Maybe a 4.4 is also too fast.
Call it 4.5 to 4.55ish—he could run.
Posted by John Turney at 1:18 PM