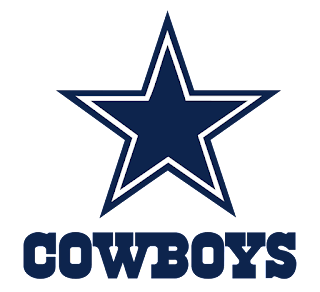 We at Pro Football Journal are trying to pick the best individual seasons in the history of each franchise, which we will continue today with the Cowboys franchise. By "Career-year" we mean the best performances at each position, with the following rule: Only one season per player per position. For example, here, we cannot pick Emmitt Smith's best two seasons and use both QB slots.
Here is the team, First-teams on left, Second-teams on : 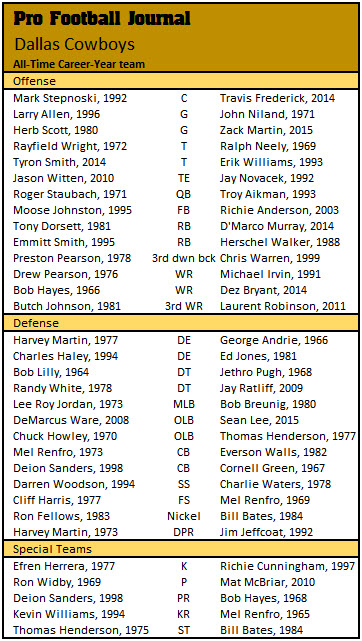 Beginning with the quarterbacks folks will see we chose Roger Staubach's 1971 season as the best. It wasn't his best statistically in terms of yards and touchdowns and the like, but he was efficient, was a big threat to use his legs and got the Cowboys their first World Championship. Additionally, he was a consensus Second-team All-Pro and was runner-up in the MVP voting by the AP.

Troy Aikman has a few seasons that qualify, but 1993 seemed like the best combination of passing statistics and post-season honors (he was a Sporting News All-Pro selection, as voted on by NFL Players) matched with a Super Bowl ring. For honorable mentions, we only went two : Don Meredith in 1966 and Tony Romo in 2014. Then, we added Craig Morton's 1969 and Danny White's 1981, though those two are quite a bit behind Meredith and Romo in our view. 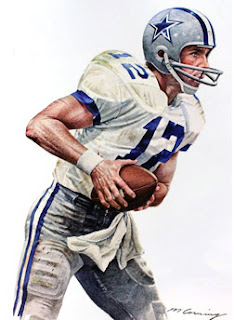 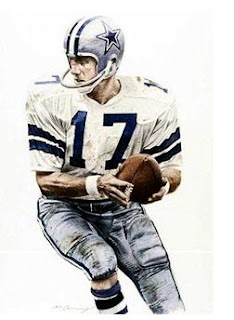 Emmitt Smith had lots of great seasons, but 1995 was, in our view, the best. Dorsett, likewise, has plenty of good seasons, but in 1981 he was at his best. Murray and Walker had fabulous seasons as well, Murray the NFL Offensive Player of the Year in 2014 and we considered putting him on the First-team over Dorsett, but it was a case of Murray being the only ball carrier whereas, in 1981, Dorsett still shared carries with a fullback.


is the pick for the First-team and Anderson has a tremendous underrated season catching passes and blocking in 2003 and gets the Second-team mention. Johnston is one of the major reasons fullbacks were added to the AP All-Pro team and the Pro Bowl. Many AP voters felt the guys doing a lot of the dirty work deserved some recognition.

Had we chosen a classic  for the First-team it would have been Perkins but we generally consider those "running backs" and the guard-in-the-backfield types as "fullbacks" when teams have used both in their history. The fullback position may be removed next year, however. Writers such as Jason Lisk of The Big Lead and  of Football Perspective and Michael David Smith of Pro Football Talk have noted having fullback as an All-Pro position may have outlived  usefulness.

The Cowboys were one of the  to use the shotgun or "spread" offense regularly, certainly the first of the 1970s, and when they used that Preston Pearson was the back and he always seemed to make catches that resulted in first downs. He was too good a receiver for linebackers to cover. He was a starter when he first arrived in Dallas, but by 1978 he was a role player and a very good one. Chris Warren came over to back up Emmitt but found a role catching passes in 1999.

is going to be dicey, we can tell. Drew Pearson was a consensus All-pro in 1976 and we contend getting 800 was a tougher prospect in the "dead ball era" of the NFL than getting 1,200-1,400 today.
Bob Hayes, too, was a consensus All-Pro and led the NFL in touchdown passes in 1966. It was often written that Hayes's speed changed the game in that zone defenses were developed to stop him. Well, that was hyperbole. Teams did rotate the zones to his side, the weak side, which was unusual, but not unheard of. Teams did that for split ends or "X" receivers such as the Giants Del Shofner. Even in the Thanksgiving Day Massacre in 1962 when the Detroit Lions sacked Bart Starr twelve times, the Lions rotated the zone to the split end side and credited that, in part, for confusing Starr into holding the ball longer than he normally would have. Regardless, Hayes did get extra coverage and it could even be said he may have gotten more than other receivers due to his World Class speed, but it wasn't exactly new.
Michael Irvin's top statistical season was 1995, but in that season he wasn't All-Pro. The numbers around the NFL jumped and what would have led the league in 1991 didn't get a player to the Pro Bowl. Just ask Isaac Bruce and his 1995 season that was sans Pro Bowl. So, we went with Irvin's 1991 season when he had big numbers and was considered one of the two best WRs in the NFL for that year. Dez Bryant's 2014 ranks fourth in our view.

Terrell Owens, 2007, Frank Clarke, 1964, Miles Austin, 2009, Tony Hill, 1979 are honorable mentions.  Researcher John Horn feels that one of Lance Rentzel's seasons deserves mention and we agree, we go with 1969 when he was Second-team All-NFL and  had 12 touchdowns and a 22.3 yard per catch average.

For the 3rd receiver or slot, we went with Butch Johnson in 1981 and Laurent Robinson's 2011 season and his 11 touchdowns off the bench. Johnson, it was said, was good enough to start for a lot of teams, but Dallas he had to play behind Drew Pearson and Tony Hill. That may have been an the Cowboys 3 WR set was very effective due to Johnson's skills usually being better than the opposing team's nickel back.

Mark Stepnoski, 1992, was an NEA All-Pro and he gets the First-team nod over Travis Frederick's 2014 season when he was a PFWA All-Pro. Andre Gurode, 2007, is the first honorable mention with his Sporting News All-Pro selection. Dave Manders, 1966, Ray Donaldson, 1996, were Pro Bowlers and also get an HM.
Larry Allen, 1996, and  Herb Scott, 1980, get First-team honors and John Niland, 1971, and Zack Martin, 2015, are the Second-, though we expect Martin to supplant Scott at some point. Allen was simply dominating and several of his seasons would fit here. Nate Newton's 1995 is an honorable mention and he, maybe, should be on the Second-team over either Niland or Martin, but we looked at team performance, but also  honors and grades and went Newton as the fifth best season for a Cowboys guard.

Rayfield Wright, 1972,  and Tyron Smith, 2014 tops as the Cowboys tackles. Ralph Neely, 1969, and Erik Williams, 1993, are next. Wright was voted the NFL Offensive Lineman of the Year by the players, Smith was a consensus All-Pro. Neely was an All-Decade selection the 1960s (though we feel that was in error because he didn't play enough seasons in that decade, nonetheless, it shows that he was thought of as one of in that era).


Jumping to special teams, Efren Herrera, 1977, was a consensus All-pro  as was Richie Cunningham, in 1997. However, we are well aware than Dan Bailey is the best kicker in Dallas history, he has yet to show he's the best in the NFL by being named First-team All-Pro. In 2015 he was Second-team and for that, he's an HM, but if he continues on his career path he will take a top spot here.  is an HM for 1981 and Nick Folk's Pro Bowl season of 2007 has to be included.

Ron Widby, 1969, was All-Pro and Mat McBriar, 2010, was a Second-team All-Pro so they get the nods. And strong honorable mention to Sam Baker for both 1962 and 1963 and his 40.7 and 40.6 net punting averages with 1962 the "official" honorable mention. We may rethink this at some point and given circumstances Baker may be the top pick. Another HM is Chris Jones's 2015 season and his 42.5 net average, which is the team record.

Some may bristle at Thomas Henderson, 1975, getting top special teams player over one of the best of all-time in Bill Bates. But this is a top season award, not a career award. Bates, 1984, is Second-team and he could have several spots, he was that consistent. But Henderson would cover punts from the outside, would bust up a wedge and even return a kick on a reverse for a touchdown. He was 6-2, 220 pounds and could run with the wind. And he was a hitter.

In fact, we'd name Henderson the NFL's Special Teams Player of the Year, retroactively if we could. Jim Schwantz set the team record for special teams tackles with 32 and was a Pro Bowler in 1996 and he gets an honorable mention as does Sam Hurd for his 2009 campaign.
Last, but not least, the defense.

Ron Fellows, 1983, is the top  back. He was the first nickel back ever named All-Pro when NFL Films awarded him that honor in 1983. He picked off five passes, one for a t while not starting a game. Bill Bates, 1984, would play nickel linebacker in the Cowboys sub-packages and his role was to tackle and blitz. In 1984 he had 5 sacks in just 12 games in that role. He gets the Second-team nod. Randy Hughes (1977) is an honorable mention extra . 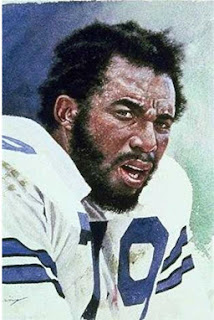 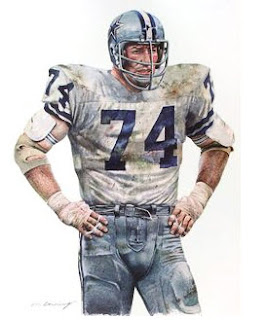 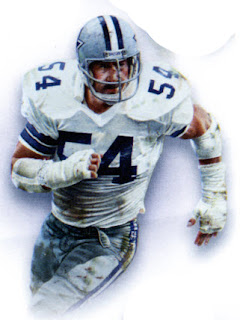 Harvey Martin, 1973, was one of the first designated rushers in NFL History. In 1973 he would come in left end and rush the passer and in that role he had 8½ sacks. Jim Jeffcoat assumed that role late in his career and had 10.5 sacks in 1992 as the Cowboys employed "wave" rushers.

Harvey Martin also gets the top spot as starting defensive end. In 1977 he was the NFL Defensive Player of the Year, led the NFL with 20 sacks, had 67 tackles and was the Super Bowl co-MVP. Hard to have a better season as a defensive end. Charles Haley was the 1994 UPI NFC Defensive Player of the Year and he gets the other First-team spot. George Andrie had 18½ sacks in 1966 and was a Second-team All-Pro. Ed Jones's 1981 season was an All-Pro .
Lilly could have had a half-dozen entries here, but we are going with 1964. It was his first full season in the Cowboys Flex defense and he just tore up the NFL. He had 67  and 16 were for losses and drew countless double teams, he  six passes and had 10½ sacks on top of the run tackles for losses. It beats out his 80 tackle and top sack season of 15 in 1966. In fact, we feel that Bob Lilly was the NFL's  Defensive Player of the Year for 1964. At least, that is what the delegates at PFJ say.

Randy White, like Lilly, had a few seasons to choose from. We chose 1978 over 1984. Though it was close. In 1984 White had 110 tackles, 10 were , 12.5 sacks and four forced fumbles and was a  All-Pro. He was a  All-Pro in 1978 as well, had 100 sacks, 6 stuffs, two forced fumbles. However, in terms of pressures, according to Cowboys, he had 66 hurries, 7 sacks in which he forced or assisted, hit the quarterback 14 other times and forced six bad throws, a total of 93 plays, other than sacks that he disrupted the opponent's passing game. All pretty terrific considering he got off to a slow start, recording only one sack in the first four games.
Jethro Pugh had 73 sacks from 1967 through 1972. Find a defensive tackle in the post-1982 era with more over a 6-year period. Try and find one even close. We picked Pugh's 1968 season and his 15½ sacks and 55 tackles.  Jay Ratliff had a fine All-Pro season in 2009 and he gets the Second-team nod.


Mel Renfro, 1973 Deion Sanders, 1998 and First-team and  Everson Walls, 1982 are next Cornell Green, 1967. Herb Adderly's 1971 and Terrence Newman, 2009, is honorable mention along with .
Darren Woodson, 1994 is the top strong safety followed by Charlie Waters, 1978. And "Captain Crash" Cliff Harris and his 1977 season  the top free season in club annals. Harris would move to slot corner when extra DB Randy Hughes (honorable mention for back-1977) entered the game. Hughes would play deep and Harris would cover the slot receiver.

Mel Renfro, 1969, is a double dipper, but he moved from free safety to cornerback in 1970 and was superb at both. It is only fair to give Roy Williams, 2003, and Michael Downs, 1984, slots as honorable mentions.

Agree? Disagree? Let us know where we messed up in the comments section below.
Posted by John Turney at 4:53 PM