After finishing his four years at the University of Louisville, Johnny Unitas was drafted in the 9 of the 1955 NFL Draft by the Pittsburgh Steelers, number 102 overall- right after Alabama defensive tackle Ed Culpepper by the Green Bay Packers and right before Oregon State tackle John by the Los Angeles Rams.

arrived at Steelers camp facing a very tall challenge in making the team. The Steelers already had three other quarterbacks in camp. The incumbent starter was twenty-eight year old Jim Finks (a future Hall of Fame General Manager), who was entering his 7 in the NFL. In 1954 he threw for over 2,000 yards and 14 touchdowns while leading the Steelers to a 5-7 record. His going into camp were Ted Marchibroda, a first round pick by the Steelers in 1953 and their quarterback of the future, and third stringer Vic Eaton.

Throughout camp Unitas did not get much practice time with the Steelers offense to show what he could do as a quarterback in the NFL. He spent some of the time throwing passes to the sons of Steelers owner Art Rooney. One of the other highlights of camp for Unitas was when a photo was taken of him showing two nuns how to throw a football.

Kiesling didn’t even let Unitas throw one pass in any of the team’s pre-season games. As camp ended Kiesling told Unitas he was being cut from the team. This did not make Unitas happy at all.

“They came down and told me ‘Coach wants to see you. Bring your notebook so you can turn it .’ When I got into Kiesling’s office, he said, ‘We just can’t carry four quarterbacks. It would be a luxury for that and you’d have to be able to do something else. We’re going to let you go.’ I got a little hot under the collar, and I told him. ‘You know, I wouldn’t mind being released or being cut if I’d had an opportunity to play and I screwed up very badly. But you never gave me the damn opportunity to do it.”
Unitas left St. Bonaventure with his bag and pocketed the ten dollars for bus fare to (some 218 miles) back home to Pittsburgh. When he arrived home to his wife Dorothy he handed her the crisp ten dollar-bill. For now it looked like Unitas’s NFL career was over before it really got started.

In 1955 the Pittsburgh Steelers finished in last place the Eastern Division with a 4-8 record. Jim Finks retired after the the starting quarterback spot to Marchibroda.


While at home in Pittsburgh Johnny Unitas did not give up on his dream of playing in the NFL. But he needed to work to help support his wife and new baby on the way so he accepted a job on a construction crew being a “monkey man” which required him to climb as high as one hundred feet in the air on a pile driver to apply lube.

Unitas also agreed to play semi-professional football for the Bloomfield Rams located on the of Pittsburgh. Rams coach Chuck “Bear” Rogers recruited Unitas to play for a whopping $6 a game. After each game played Unitas gave the money to his wife.


After making it with the Colts Unitas did an interview with Tim Cohane, the sports editor of Look magazine, for an article that appeared in December 8, 1959 issue, where he talks about his days with the Bloomfield Rams.

“I think I had only one practice with the Bloomfield Rams. We played Wednesdays and Saturday nights. We sort of made up the plays as we went along. I’d tell the receivers what patterns to trace, and I’d pass to the one who looked most open. Each team had only about three or four good players and these could do pretty much what they wanted against the rest. At the same time you might have a 140-pound blocker trying to hold off a 225-pound linebacker crashing in on you, so you had to take . But I was hardened enough and lucky enough to escape injury. We won the championship, which was more satisfying than the $6 a game I was getting. It was football, and I was able to keep in practice.”

Unitas wore jersey number 45 with the Rams and played both quarterback and defensive back.

The Rams played other semi-pro teams in the Conference, such as the Pittsburgh Cubs, Arnold A.C. the Nanty-Glo Blackhawks. They played most of their games on Thursday and Saturday nights at Park. The games were played on a true “sandlot” field where there were more rocks and glass than grass.


Unitas quickly became the leader of the Rams and the best player in the league. But was anybody noticing? “I don’t think anybody has ever understood that what mattered the most was not the $6, but the fact that there was a football team that wanted me,” said Unitas once.

Unitas knew he could play pro ball and wanted a second chance. He was about to get it.
After playing sandlot ball in the Fall of 1955 Unitas received an important phone call that changed his career and life forever. In February of 1956 Unitas got a call from Don , the General Manager of the Baltimore Colts, who made the 80-cent phone call to Pittsburgh. had talked to Colts head coach Weeb Ewbank, who had known Unitas’s college coach Frank Camp from Louisville, about maybe signing Unitas to a contract. told Unitas to report to an April workout and if Ewbank liked what he saw they would offer him a contract for $7,000. Unitas agreed. At the spring workout Unitas impressed recalls the former sandlot star’s performance that day.

“We took pictures of John under center, and when he set up, and right at the last, when he followed through. The thing that we noticed right away was the way he followed through. It was exceptional. His arm went through so far that he turned his hand over like a pitcher. It was like throwing a screwball. When he followed through, you could see the back of his hand. I worried that he might get what they call a tennis elbow. But, boy, I saw the way he could throw and I never bothered him about it. You knew right away. We knew that as soon as learned the offense he would be our quarterback.” 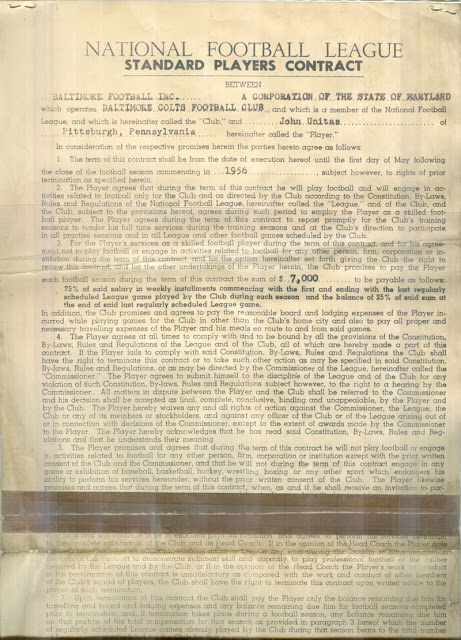 In the end the famous “eighty-cent phone call” did one thing. It got Johnny Unitas to Baltimore and the rest is history.