Short Yardage Specialists Through the Years 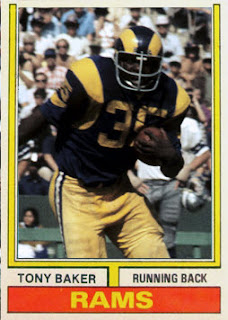 While this is not an exhaustive list, it is composed of the players we feel filled the role of a short yardage back from the time we first noticed the role being used commonly in the NFL.

While it was certainly not begun in 1973, it was a year in which we could find players who had fewer than 100 carries, a good percentage of them being touchdowns, very few starts and a very low yards per carry average. We remember seeing most of them play.

Some teams, back in the day and still to this day, used a quarterback as the short yardage back. Jack Kemp was never shy about calling his own number. Roman Gabriel his team in rushing touchdowns a season. Tom Brady is still an excellent short yardage ball if it's less than a yard to go. 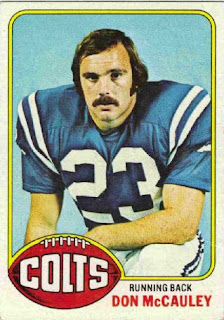 But we were not looking for those players, we wanted to look at the specialists. Not the greats, not the quarterbacks or even the starting fullbacks. Specialists in the same vein as nickel backs or designated pass rushers.

Here are our lists and in the comments we will name who might have been the "All-Pro" for this position through the years. 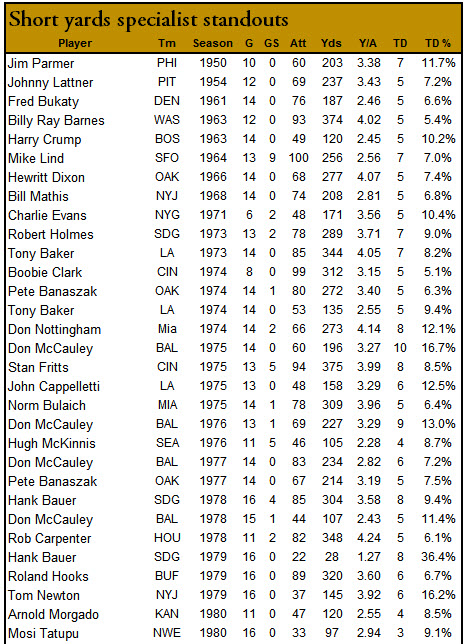 Robert Holmes was an effective, powerful short yardage back Kansas City and with the Chargers, in 1973, he filled the role of short yardage well. He's our Second-team pick. Touchdown Tony Baker  the power back in the 1973 record-setting Rams backfield. He entered the game in short yardage and goal line situations and, like Holmes, scored seven touchdowns. On the 41 occasions, Baker carried the ball less than 4 yards to go, he converted 28 of them. He's the First-team All-Pro.

For 1974 our choices are Banaszak for First-team and Baker for Second-team All-Pro. The following season Don McCauley is the First-team All-Pro and John Cappelletti, who took over Baker's role as a SY specialist is Second-team. McCauley will appear again and again and what is interesting is that he had roles for the Colts in this era. He was the SY guy as well as the 3rd down back, averaging over 40 catches a season from 1976 through 1981. McCauley wasn't a big, bruising back like Baker or he seemed to have a nose for the end zone, averaging seven touchdowns a season from 1975 through 1979.

In 1976 Seattle's Hugh McKinnis is the Second-team All-Pro behind McCauley.

Pete Banaszak and McCauley are so very close in 1977 but we will go with Banaszak as First-team and McCauley Second-team. Banaszak carried the ball 14 too many times in 1976 or he would have been the Second-team layer rather than McKinnis. Additionally, in 1975 Banaszak carried the ball a lot due to injuries to other fullbacks so he got " minutes" that season but he proved his worth totaling 16 rushing touchdowns but had too many carriers to qualify as a specialist.

In 1978 the First-team All-Pro short yardage specialist is Hank Bauer and the backup All-Pro is McCauley. Bauer's eight rushing touchdowns put him over the top.

The following season we are going First-team with Bauer (8 TDs in 22 rushes) and Tom Newton of the Jets for Second-team. 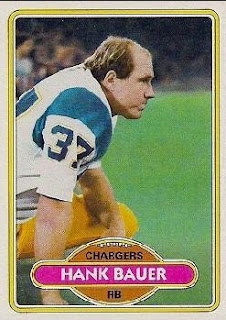 Arnold Morgado gets First-team nod in 1980 over Mosi Tatupu of the Patriots. I wasn't a stellar year for the position, but these two were most effective. In 1981 Johnny Davis is First-team over Roosevelt Leaks of the Bills, who gets the backup nod.

The 1982 strike year skews everything so we are going only with Johnny Davis's 1 touchdown in four carries for the Second-team. Seems fitting since the sides couldn't work out a deal that season. Frank Hawkins of the Raiders is the First-team pick.

In 1983 we are choosing James Owens as First-team and Larry Kinnebrew for the Second-team.

Huge Pete Johnson personified the role of Paige is the Second-team All-Pro behind Johnson. 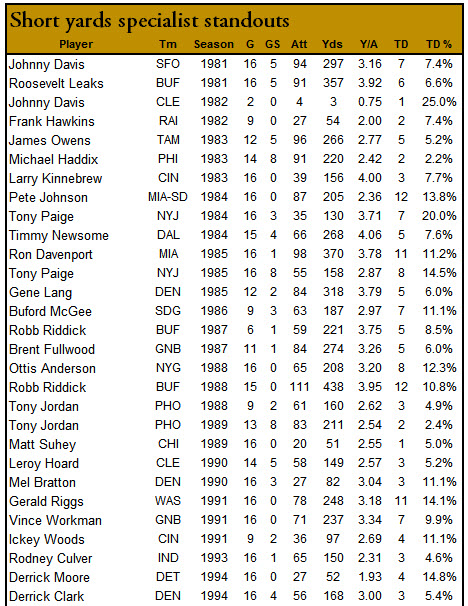 short yardage specialist in 1984. His twelve touchdowns (none were one yard, one was two yards and two were three yards) tops all players in this role, likely since 1950, which is as far back as we looked. Oddly, this was Johnson's last season. The 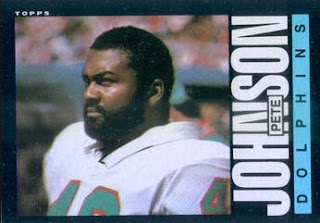 Paige is the Second-team pick in 1985 as well, behind the Dolphins Ron tallied 11 touchdowns in the "Johnson" role.

Buford McGee of the Chargers is the only player we found significant numbers in 1986. Ottis played with both Giants and Cardinals is the Second-.

In 1987 we are going with Robb Riddick for the First-team and Brent Fullwood as Second-team All-Pro SY specialist.

Giant Ottis Anderson is a clear First-team All-Pro specialist in 1988 and Robb Riddick is Second-team, though you could make the case he was more effective than Anderson. Riddick had over the maximum carries (111) but his 12 TDs made up for the time he spent outside the short yardage rule. Roddick was a smaller (195) back and spent considerable time in the base offense as Thurman Thomas's backup.

Big, pounding Cardinal Tony Jordan is an honorable mention. Jordan moves up to the First-team in 1989 and former bear starter Matt Suhey is the Second-team All-Pro, though neither really scored enough touchdowns to satisfy us, so it was not a great year for this role.

Mel Bratton of Denver is the First-team All-Pro in 1989 and Leroy Hoard is the Second-.  back Gerald Riggs, in his final season adopted the SY role and excelled with 11 touchdowns (he also did a great job running down and covering kickoffs). He's an easy choice for First-team All-Pro for 1991. Vince Workman of the Packers is his backup.

In 1992 Eric Bieniemy, small for the role, is the First-team pick and Denver's Greg Lewis is the Second-team All-Pro.  Rodney Culver is First-team in 1993 and Napoleon McCallum is next. McCallum didn't have the classic body type, but he, in some ways, mimicked how Marcus Allen ran in short yardage.

In 1994 two Derricks, Moore of Detroit and Clark of Denver are First- and Second-team, respectively.

In 1995 former Charger starter M Butts took the SY role for the Oilers and garners a First-team selection by us.  Rodney Culver is the Second-team selection. Ki-Jana Carter is the sole selection in 1996.

For 1997 Leroy Hoard is the First-team pick and Lamont Warren is the Second-team choice.

Mario Bates is the top selection and Touchdown Tommy Vardell is the backup.  violates our criteria since he was the starting fullback, but he did this felt an exception was . 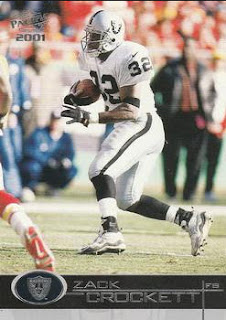 Zack Crockett is, for the third consecutive year, the First-team SY specialists in 2002 and the Colts James Mungro backs him up.  Crockett gets yet another First-team All-Pro pick in 2003 and is backed up by Arlen filled in for a sore-kneed Marshall Faulk in the Rams Sy packages.

Greg Jones is in 2004, backed up by Ron Dayne. In 2005 Jerome Bettis is the First-team pick and Brandon Jacobs is the Second-team player with Mike Alstott honorable mention 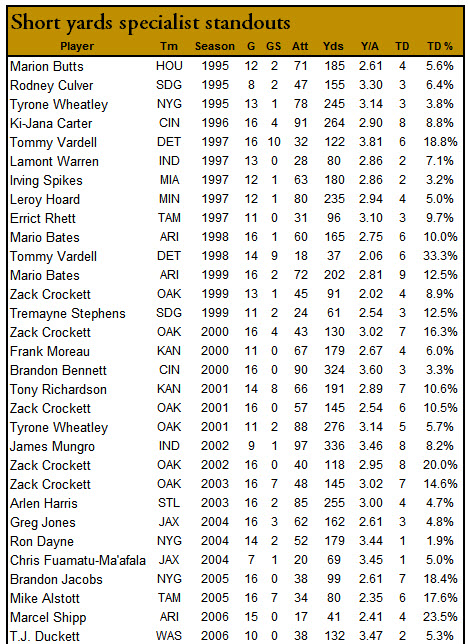 Marcel Shipp gets the First-team in 2006 and is backed up by T.J, Duckett. Reuben Droughns is First-team in 2007 and fast (for his size) Samkon Gado is the Second-team pick. T.J. Duckett is top dog in 2008, followed by BenJarvus Green-Ellis.

Chris Brown of Houston is First-team in 2009 and Donald Brown of the Colts backs him up.

In 2010 Javarris James of the Colts is a classic 46 carries, 112 yards, and a 2.43 average and six touchdowns, easy First-team All-Pro choice. John Kuhn was the starting fullback for the Packers, but in 2010 he started only two games and scored four short-yardage touchdowns. As the roles conflate it gets harder to meet our original criteria, so we go with Kuhn for the Second-team.