Centers were easy, though both Otto and Tingelhoff got most of their honors in the 1960s, they were still excellent players the early to mid-1970s.  Bob Jon Morris, Len Hauss,  and Forrest Blue get a mention due to their own honors (which were hard to come by with Otto and Tingelhoff in the league at the same time). Blue was a steady All-Pro with the 49ers then after he left, then nothing. A curious career.
Tom Mack and Gene Upshaw lead a large group of guards of which several could be Second-team selections over our choices of Budde and Sweeney. Among them (all honorable mentions) are Gene Hickerson, Larry Little, and Gale Gillingham. In fact, Little, though mostly associated with the 1970s did start in the 1960s and was good. But his impact was in the 1970s. 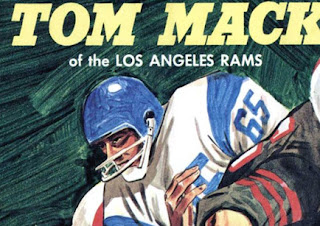 The tackle position has good players, but it wasn't as deep as the guards. Tyrer and Brown (1964-73 is his "decade") are the top two tackles. Ralph Neeley had to move to left tackle to make way for Rayfield Wright and that interrupted his string of All-Pro he was still solid on the left side after being All-Pro on the right. Winston Hill gets the other Second-team slot over Charlie Cowan, who is an honorable mention as is Ernie McMillan and Norm Evans. Hill, Cowan and McMillian both played left- and right tackle in their careers and were honored at both.
Jerry Smith is an honorable mention behind Jackie Smith and Charlie Sanders. 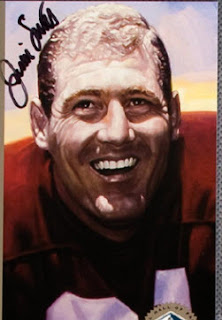 For both 1965-74 and 1966-75, Fran Tarkenton is the most honored (though by a small margin) and has the most passing statistics in terms of yards, completions, touchdowns, and wins. Namath gets the Second-team pick due to his impact, skill set, and Super Bowl . Honorable mentions are many: Roman Gabriel, John Brodie,  Bob Griese, John Hadl, Len Dawson and Sonny Jurgensen. Gabriel was close to Tarkenton in wins and in passing statistics, he also was an MVP. He's the first runner-up.

Brodie was All-Pro in 1965 and 1970 and was an MVP in 1970. Griese came a bit was a Super Bowl-winning quarterback as was Dawson, though he and Jurgensen were winding down and sharing playing time in the early-1970s.

Kelly and Little are the RBs with Csonka and Brown behind them, It should be noted that the carryover from the 1960s talent affected the selections here. Running back is a good example. From the floating decade we (anything from 1964-73 to 1965-74 or 1966-75) Gale Sayers is All-Pro the most (Five times). More than any of our four selections. Next is O.J. Simpson with four All-Pro selections. From 1966-75 Simpson is the leading rusher with over 8200 yards. From 1965-74 he is second. Thus, it could be argued that Sayers and Simpson could be the picks for this team. However, we chose to put players with shorter careers into the decade they most fit and the 1960s fit Sayers and the 1970s fit Simpson.
In fact John Mackey, Lance Alworth, Don Maynard, Herb Adderley, Dick LeBeau, Johnny Robinson
Larry Wilson and others for this team in terms of years of service and honors. But they are so ensconced in 1960s lore that we really felt they were 1960s players even though they have several years in the 1970s. None had overly long careers like a Mel Hein that would fit with putting them on two All-Decade teams in a row. So, if folks object, please comment. It was a tough decision, but the purpose of this  is to recognize the players who were overall the best in the 10-year periods we've designated. However, we would love to hear opposing views.

Charley Taylor and Paul Warfield are the top WRs. We feel like Taylor fits here and not on the 1960s teams he often chosen for. Fred Biletnikoff is in the same boat in our view. Bob Hayes and Otis Taylor tied for the last spot.

Claude Humphrey edged our Gerry Philbin (short career), Bubba Smith (short career) and Verlon Biggs (93½ sacks from 1965-74). Humphrey began late (1968) and missed 1975 with an injury but we felt his impact early qualified him for this team. However, he would likely be a Second-team selection for the 1970s as well.  We also give Bill Stanfill and Ron McDole and honorable mention as well.

This is Olsen and Lilly fit. Not the they both were the Official All-Decade Team. They also fir in the 1960s as well. Buck Buchanan was in his prime here, too. We tied Page and Greene, and they would 100% be the tackles for any 1970s team, too. Their impact was pretty amazing in the early 1970s. Manny Fernandez, who played both end and tackle, is an honorable mention.
Again, this is THE Butkus decade. When some pundits take and "AP only" approach to we always point to Butkus. When the AP Defensive Player of the Year award is listed in an article as the only DPOY Award we ask "How many times did Butkus win it?". Answer: Zero. It wasn't created until 1972. But, Butkus did win two NEA Defensive MVP Awards (1969 and 1970). us, that ends the "AP only" school of thought on All-Pros and Awards. 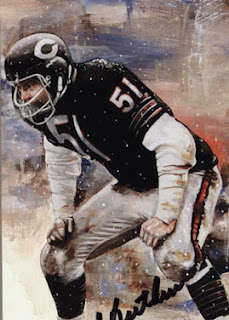 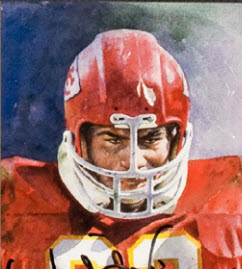 Bobby Bell is similar to Butkus in that this is his "decade". We pair him with Chuck Howley.  Backing them up is a trio of Hall of Famers: Dave Wilcox, Chris Hanburger and Dave Robinson. Honorable mentions are Andy Russell and George Webster.
Willie Bown and Jimmy Johnson are the top corners followed very closely by Lem Barney
Emmitt Thomas. Pat Fischer is an honorable mention.
Ken Houston and Paul Krause are the safeties. Dick Anderson backs up Houston at strong safety. Renfro was a safety from 1964-69. Then, he was a very fine cornerback from 1970 through the rest of his career. We put him at safety. It was either that or put Cornell Green (who switched positions with Renfro) who got at both positions, as did Renfro. Carl Lockhart is an honorable mention at safety.
fits here (as he does in a few decades) and Jim Bakken is next in honors and kicking percentages. beat out Jim Turner, Fred Cox, and Don Cockroft who right on in terms of percentages and honors. George Blanda, though he didn't have the kicking numbers as the others was a clutch kicker and his kicking prowess, in part, was why he won the 1970 AFC Player of the Year Awards. He gets an honorable mention and it could be argued he deserves the Second-team slot over .
Wilson and Lee were the top punters, though they seemed to have quite a few punts blocked. 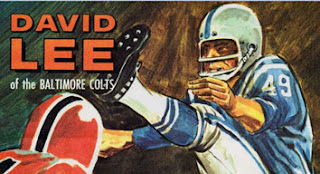 Return men were based mostly on touchdowns and average since All-Pro teams rarely recognized return men in this era. Alvin Haymond is our special teams demon. He was the head of the Rams "Haymond's Headhunters" featured on the cover of Life magazine in 1971. Ceasar Belser was also an excellent bomb squad man.

Agree? Disagree? Post in comments section below
Posted by John Turney at 1:54 PM