On January 20, 1979 Johnny Unitas was selected as one of four men to be selected into the Pro Football Hall of Fame. Unitas was elected on his time on the ballot and would be inducted along with Bears linebacker Dick Butkus, Chargers tackle Ron Mix and Lions defensive back Yale Lary. The four men would make up the Hall of Fame's Class of 1979.

For his presenter Unitas went back to his college days and selected his old quarterback coach at the University of Louisville Frank Gitschier.

On July 28, 1979 in Canton, Ohio Unitas would be inducted. Fifteen buses of fans came from Baltimore, as nearly 10,000 football fans packed outside the front steps of the Hall of Fame to see Johnny U get his moment back in the spotlight.

“This is a very great moment in my lifeI want to talk about Johnny Unitas, my man. No one here is more totally aware of the talents given to him by God, than Johnny Unitas. And when you use those talents to the utmost, the bottom line is dedication, desire, discipline, sacrifice, and when you put all that spells John Unitas, extraordinary in the field of leadership and it spells John Unitas a man respected by all who have known him.

But let’s talk about some of the talents that more apparent to most of us because John has entertained us over the years. The thing that amazes me than anything else is the man’s ability to stand in that pocket with all that violence and mayhem going on about him. Some of which to be inflicted upon him and he stood back there and ate his lunch before he threw that ball. His courage is unquestionable. Now let’s digress a moment back to that, what is now called the greatest football game in the history of professional football. The game between the Baltimore Colts and New York Giants. To say the least, those calls not only unpredictable or totally unbelievable when you assess the downs and the yardage situations at that time. The man has always done his homework and he knew the strengths and weakness that a defensive person should know. He had no as a reader of defense. It is impossible for me to go any further in these ceremonies and not make the flat-out statement that if John Unitas is not the greatest quarterback that played professional football- there can’t be anybody any greater.

Now I must say, most importantly the man has always had his priorities in the right order. Let me say this to you, can you imagine how many famous people, great people this man has met in his life. And he selected an average college football player, an average college football coach, an average recruiter, as a matter of fact a nobody to be his presenter. That tells you something about Johnny Unitas. From all of his coaches in high school, in college, with the Bloomfield Rams, and all of professional football and I want to include John’s high school coach Max Carey who is deceased and Mr. Carroll Rosenbloom. This is the greatest moment of my life and I want to thank you John Constantine Unitas.”
A big cheer came from the Canton crowd, as well as the big pack of Colts rooters. Unitas strolled up to the podium and spoke.

“They must be drinking over there. Thank you very much Frank, it’s a real privilege for me to be here. And I want to thank you especially Frank for taking the time out, along with your wife Mary and your boys to come here to Canton to enshrine me. I appreciate it. It was a difficult decision to make, but when I boiled I down, it was the only decision to make and I thought that the time and effort you put forth me in college to come back to Tennessee when you were earning your Masters degree and work with me on weekends to try to push some sense in this stubborn Ukrainian head of mine that I appreciate it and I hope and I know you appreciate coming here and I thank you for that. Let’s not there’s a gentleman who is ill in Baltimore who is a good friend of mine who is in the hospital and couldn’t make it, Mr. Joe Foley, hello and wish him a speedy recovery.

You know a man never gets to this station of life without being helped, aided, shoved, pushed into doing something the proper way as the other enshrines mentioned and thanks to the families so also I have to this. My mother who was always behind me pushing, shoving, moving, getting me to do things. Trying to make me speak, really she always used to say getting a word out of me was like pulling teeth, it probably was because I don’t very often say a whole lot. My family, of course, my wife and kids. I thank all of them for being here, for being behind me and I know my wife is the most critical of whatever I do, but she always does it in love, so she says. I appreciate that. Of course, my brother Leonard who is here from Orlando and his wife, my sister Millie and here husband, and my sister Shirley and her husband and boys who have come down from Pittsburgh. I appreciate that and I appreciate them being here. the blue and white outfits out there the Colts. These are Baltimore fans, there as a lot of players who played Baltimore during the time I played, know what I am talking about. Coming into was coming into an outside insane asylum. For these fans were always 100 percent behind us and I hope they get 100 percent behind the new regime to try and help aid them in getting them to the Super Bowl so we can put more Baltimore Colts in this Hall of Fame.

I won’t take up a whole lot of your time, there is going to be a fine football game this afternoon and it is getting a little warm, but there are two other people that I wished could have been here. Frank talked about one of them, James Carey, James Max Carey, but his son is here with his two sons and I thank them for coming down. Max Carey was a great influence on men when I was in high school as a football player. He worked with me, talked with me, treated me like a son. I can always remember May , ‘when the going gets tough, the tough get going, that is what I expect out of you 110 percent at all times.’ I always tried to remember that and give 110 percent, whenever I was on the field or off, regardless what it was I felt that I was consistent and he always got 110 percent out of me.

Then there was a with my first football game in Baltimore, a little funny fat guy with a beard, sitting down here by the name of Cameron Synder, who came over to me and knew I was nervous and , I just want you to remember this, that the game you are playing today is a kids game played by men, go out and do a job, and I thank you for that Cameron. It is hard to remember everyone, very difficult because as I said a lot of people touch your life as you are growing up, in small ways, possibly some are larger than others. You know just by a word, a congratulatory word or , thanks for the entertainment you have given us over the years, all these are great things to remember and I will remember them.

I will remember this day and I honestly want to be honest with you that the players I played with over the years, the coach that I had, the Sundusky’s, that the players, the Nutters, the Eagers, the Braces, Marchetti’s and Pellington’s, Ewbank, Shula, all of my coaches McCafferty, they are directly responsible for my being here and I want you all to know that because I have never forgotten that. I want to thank you very, very much for your attention and the kind words and may God Bless All of You."

Johnny U sat down. He was now a Hall of Famer.


Looking at his bronze bust Unitas would see the 1979 version of himself. One with more floppy hair than his trademark during his playing days. Probably in hindsight, Unitas with a crewcut would’ve been the way to go.

Later that day the Dallas Cowboys (NFC) played the Oakland Raiders (AFC) in the Annual Hall of Fame game in Fawcett Stadium right across the street from the Hall of Fame. 20,648 spectators saw the Raiders pull out a 20-13 pre-season win. special weekend was now complete.


the Pro Football Hall of Fame put up for display one of Unitas's full game uniforms- from helmet to black high-top cleats- to honor his streak of 47-straight games with a touchdown pass. 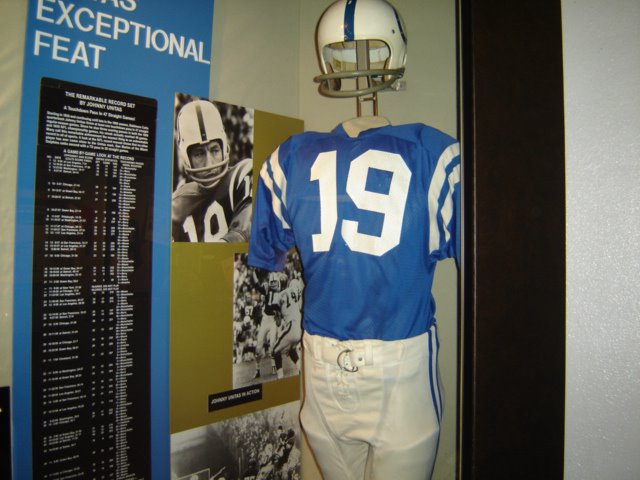 Thirty-seven years ago Unitas took his place among the NFL's all-time greats.