Johnny Unitas was named to 10 Pro Bowls for the Western Division during his eighteen year career. After the season Unitas would make the trip out to the west coast for the annual Pro Bowl. All ten games he played in were held at the Los Angeles Memorial Coliseum.

Just like in the regular season and post-season Unitas sometime dominated the all-star classic.

Unitas is named a reserve in his first Pro Bowl appearance after the 1957 season. Early in the game he contributes a fumble in the second quarter that leads to the East’s only touchdown. Later on he throws his first Pro Bowl touchdown pass to teammate Alan Ameche with 8 minutes left in the fourth quarter (5 yards) to make the final score 26-7. Unitas finishes the game completing 7 of 10 passes for 83 yards and the one touchdown.

Unitas makes his first start at QB for the West (his back-up QB Billy Wade). After playing most of the first half Unitas leaves the game in the third quarter with knee injury and Billy Wade finishes the game.

In , on the third play from scrimmage Unitas throws a pass that Del Shofner gets his hands on, but the ball bounces off him into the hands of Giants defensive back Jimmy Patton who returns it for a touchdown and the East took a quick 7-0 lead. After that it was all the West.

responded by leading a drive that ended with a 22-yard TD pass to his favorite target Raymond Berry. Unitas followed that up by throwing two touchdown passes in the second quarter, one to another Colts Lenny Moore and the other to 49ers fullback J.D. Smith for a 31-14 halftime lead.

The West and East traded touchdowns in the fourth quarter as the West cruised to a 38-21 victory.

Unitas was named the Offensive Player MVP as he goes 14 of 21 for 187 yards and a Pro Bowl record 3 touchdown passes. His teammate Gene “Big Daddy” Lipscomb was named the game’s best lineman. 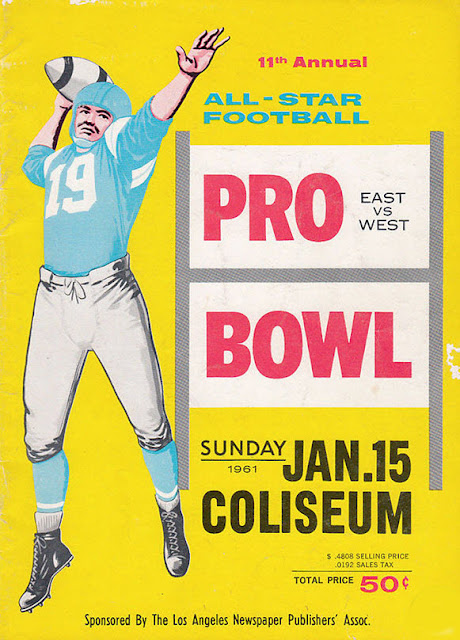 Johnny Unitas gets his 3 Pro Bowl . After leading one scoring drive the West in the opening quarter Unitas starts the second quarter with a 66-yard pass play to teammate Lenny Moore down to the one-yard line. Packers fullback Jim Taylor scores his second touchdown to give the West a 14-3 lead.

The East responds with two touchdown drives to take a 17-14 lead. But Unitas got the West back in the game right before halftime with a scoring drive of his own. Unitas breaks away from a potential sack from Redskins defensive tackle Bob Toneff and throws a 44-yard scoring pass to Lenny Moore. The West had a 21-17 lead at the break.

Both teams exchanged touchdowns (Taylor scores his 3) the West took a 28-24 lead into the 4 .

After ten minutes of scoreless action, Unitas leads the game-clinching drive by running for 25 yards to set up Rams halfback Jon Arnett’s score. The West would win 35-31. Unitas completes 10 of 18 passes for 218 yards and 1 touchdown. He also runs five times for 54 yards. Despite Taylor’s three touchdowns the sports editors of the four Los Angeles daily newspapers give the MVP to Unitas for the second straight year. Sam Huff wins the lineman honor.
Eastern All-Stars head coach Buck Shaw told reporters after the game about Unitas's running ability. "It wasn't how many times he carried the ball, but what he accomplished when he did. He ran the West out of holes each time. He's the difference." 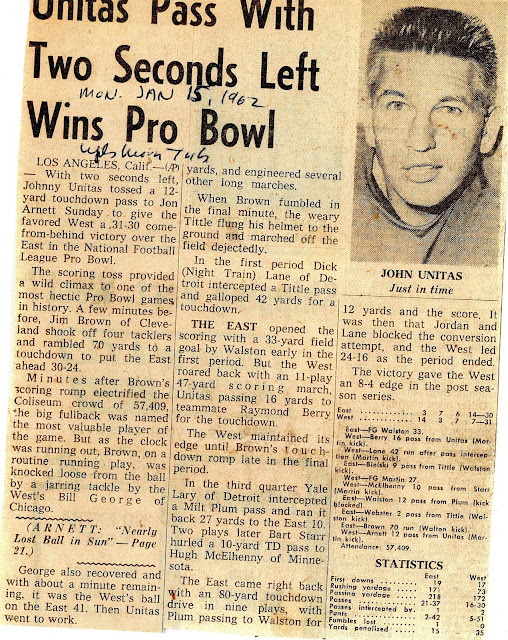 Unitas was the to Packers Bart Starr. Unitas outperformed Starr (who has just played in the NFL Championship Game) by completing 13 of 23 passes for 162 yards and 2 touchdowns (Starr went 3 of 7 for 30 and 1 TD).

In the first quarter, Unitas connected with Raymond Berry on a 16-yard scoring strike to give the West a 7-3 lead. After a Dick “Night Train” Lane interception return for a score, the West lead 17-10 at the half.
Both teams exchanged in the third to an exciting final period. The East came roaring back as Y.A. Tittle threw a 2-yard touchdown pass to his teammate Alex Webster and Browns running back Jim Brown sprinted 70 yards for the going ahead score 30-24. With 5:20 left in the game Unitas did his last minute heroics. Leading the West down the field Unitas connected with Rams halfback Jon Arnett from 12-yards out with ten seconds remaining to tie the game. Lions kicker
Jim Martin provided the extra point to give the West a 31-30 victory.

Despite the heroics, Jim Brown got the MVP nod. That was okay with Unitas, he already had two.

The first three quarters saw a back-and-forth contest. The East owned the first a 13-0 lead. But the West roared back in the second and third quarters scoring 20 unanswered points capped by a 6-yard touchdown pass from Unitas to Bears tight end Mike Ditka, giving the West a 20-13 lead.

West wins 31-17 (Record: 5-2)
Unitas starts his 5 Pro Bowl (7 ). Johnny U has pedestrian stats, 8 of 16 passing for just 93 yards, but does toss 2 touchdowns. One to teammate Raymond Berry (4 yards) in the second quarter and one to Lions end Gail Cogdill in the third to give a West an easy 31-17 win. The touchdown to Cogdill would go down as the last touchdown pass for Unitas in a Pro Bowl.

After making 8 straight Pro Bowls, Unitas misses out after the 1965 season. Not because he didn’t deserve to be because of injury. In 1965 Unitas was having one of his best season, in completing 164 of 282 passes for 2,530 yards and 23 touchdowns in 11 games. His 58.2 completion percentage was a career high at that point and his 9.0 YPA would still lead the NFL. But against the Bears in Baltimore on December 5 Unitas threw just nine passes before leaving the game with a serious knee injury. He would miss the remainder of the season. John Brodie of the 49ers starts and Fran Tarkenton backs him up. After winning six of the past eight Pro Bowls, the East wins easily 36-7. Missing Unitas was apparent.

After sitting out the previous year’s Pro Bowl Unitas came back to make the squad after the 1966 season. Starting for the 7 Unitas a great game completing just 2 passes on 12 attempts for 24 yards and a whopping 3 interceptions. Arguably Unitas's worst Pro Bowl performance. The East defeated the West 20-10.

was played on a soggy field at the L.A. Coliseum. The West jumped out to a 17-13 halftime lead behind touchdowns by Lions Mel Farr and Rams Les Josephson. The East takes the lead in the 3rd quarter with a Leroy Kelly short TD run. But the 4th quarter belongs to the West as they score 21 consecutive points highlighted by a 70-yard interception return for a score by Bears DB Richie Petitbon as the West cruised to a 38-20 victory. Unitas performs solidly in his final Pro Bowl by completing 7 of 10 passes for 42 yards and no interceptions.

Unitas finished his Pro Bowl career on the Western team with a 7-3 record. In those ten games he completed 79 of 150 passes (52 percent) for 1,144 yards and 10 touchdowns. He won three MVP awards.