1963 Associated Press AFL and NFL Players of the Week

Well, almost complete. We hesitated publishing this, the first of a new series, since we are missing one key award, Week 12, 1963 in the AFL. We simply have not been able to locate it. We think it exists, but for various reasons (a loss of a lot of data in a computer crash, and the of Google Newspaper Archives to name two) we've quit looking. We are hopeful some astute reader who has access to online newspapers or even old microfilm will get interested and fill in the gap. But since this is one of only a couple holes in 11 years the Associated Press announced these awards we went ahead and are posting it.

The other gaps you see are weeks the AP did not release any awards. In 1963 it wasn't until Week 6 that they began the awards. In coming seasons, 1964 for example, they only went from Week 5 through Week 11. We couldn't begin to guess why. But eventually it became a weekly award and named some interesting, even esoteric names, which we like.

There are lots of players whose names you'd expect, but there are a few . Bob Schmitz of the Steelers and Ron Vander Kelen of the Vikings. Schmitz, for example, scored a safety that provided the margin of victory for the Steelers. Vander Kelen came off the bench to lead the Vikings to a tie with the powerful 1963 Bears, who won the NFL title that season.

Schmitz is not the only defender to get the weekly award, Larry Wilson of the Cardinals won the Week 12 citation.

One note, the weeks on the chart are for the season week, which does not correlate with the date. The dates on the chart are the day the AP story ran, which was in the middle of the week, with the games being played on the previous Sundays (or Friday, Saturday or on occasion Monday). 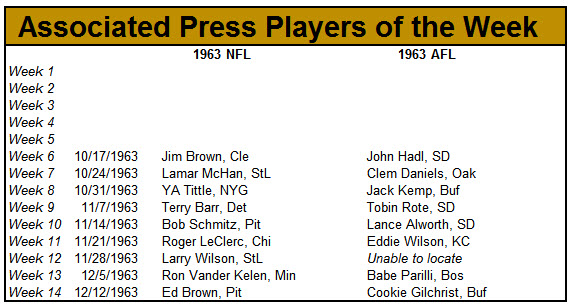 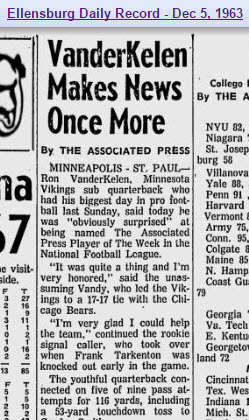 Note: Thanks to BD Sullivan of the PFRA who noted the Week 12 games in the AFL were cancelled due to the tragic assassination of President John F. the prior week.
Posted by John Turney at 9:43 PM