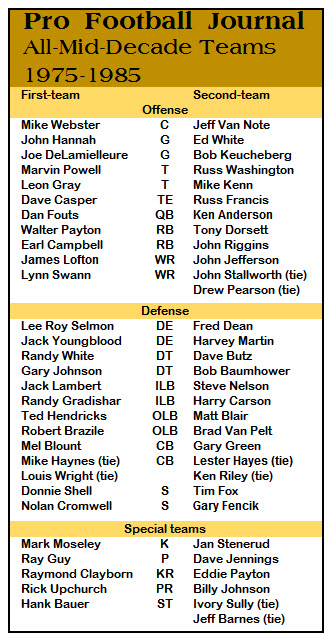 This is the perfect decade  Webster as he was a starter for  in 1975 and as dominant for the next decade. In the 1980s, Dwight Stephenson had a higher peak and some experts felt he was the top center  the 1980s over Webby. The Second-team selection was  Van Note gets the nod, with Rich Saul and Jack Rudnay as honorable mentions.
Hannah and DeLamielleure are like Webster, these 10 years are THEIR ten years. Backups are Keuch and Ed  had a good second stop in San Diego after a good bit of time in Minnesota. Herb Scott of the Cowboys, though, along with Dennis Harrah of the Rams deserve honorable mentions.
The tackles are harder in that these players were not players who excelled in all ten yearssome of them exiting after 1982 and some beginning in 1978. The 1970s and 1980s had tackles who had careers that fit those ten-year periods, here, it's partial decades. But the best were Marvin Powell, who was dominant for a few years, but tailed off, as did Leon Gray. Kenn was a rookie in 1978 but was a great tackle through the rest of this mid-decade span. Russ Washington was an underrated guy  the 1970s team, but was good in the late-1970s and early 1980s as well. Doug France is an honorable mention. Larry Brown, the Steelers converted tight end is also worthy of a mention here. Henry Lawrence is also an honorable mention. He was kind of a scapegoat in 1978 when Ken Stabler blamed him for "not playing well" but that was his second season as a starter and he did get better. After all, he was a Pro Bowler and was a starter on two Super Bowl winning teams.
Dave Casper did his best work in the 1975-85 span as did Second- Russ Francis. Kellen Winslow broke a leg in 1979 and was only a starter from 1980-85. Due to his shorter tenure (and Ozzie Newsome, too) they regulated to the 1980s All-Decade Teams where their careers fit more nicely. It is a close call but Casper and Francis were fine blockers and good receivers as well. They didn't put up the numbers of Newsome or Casper, but they could block much better.
Dan Fouts has all the honors and states in this decade. Ken Anderson is next. But, we were tempted to go with Terry Bradshaw, who won 3 Super Bowls in this decade (as opposed to 4 in the  he was snubbed on most 1970s All-Decade teams) and was an MVP as well. He gets an honorable mention as does Joe Thiesmann.


We mentioned that Earl Campbell was a Second-team All-Decade in 1970s but didn't deserve it. Well, here he does. And he's right there with Walter Payton, who like Webster and Hannah did amazing things in this mid-decade. Tony Dorsett and John Riggins are the Second-team running backs.


Wide receivers, as always, are hard in this type of  because people of good faith have  criteria in what they see in a wide receiver and we anticipate that we will get some grief for our selections. We are going with James Lofton and Lynn Swann on the First-team. Lofton for his deep threat ability and Swann for  he's in the Hall of Fame, i.e.  plays when they mattered most.

On the Second- are going with John  was simply great with the Chargers and then traded away, but for his peak he was one of the great ones as an "X" receiver in the Coryell system. John Stallworth and Drew Pearson share the other spot. Pearson is the NFC's answer to Lynn Swann and his 1974-83 and his exploits in post-season made it impossible to leave off. We give Charlie Joiner an honorable mention and Wes Chandler, who also excelled as an "X" receiver in Air Coryell after Jefferson was traded to Green Bay. Clearly, Steve Largent is mention, but we felt he was a bit more of a 1980s guy and we factored in team success and big plays in playoff games.

At tackle Randy White is the "natural" for this mid-decade team. Gary Johnson is the other tackle.  Dave Butz as one backup and nose tackle Bob Baumhower narrowly edges Doug English, who is an honorable mention. Louis Kelcher started off as a player who seemed like he'd be the next Merlin Olsen but after 1982 he just wasn't up to snuff. But from 1975-81 he was making a lot of plays behind the line of , sacks and stuffs, like Olsen used to do.
Inside backers are easy, Jack Lambert and Randy Gradishar. Steve Nelson and Harry Carson are the Second- Lambert and Gradishar are way ahead in terms of All-Pros, Defensive Player of the Years and Pro Bowls.

Ted Hendricks got a nod on the 1980s All-Decade  playing only four years of the  don't feel he belonged on that team. But, he belongs here.  Robert Brazile does as well. Matt Blair and Brad Van Pelt are very good Second- on this squad.
Mel Blount ranks first, and we have Mike Haynes and Louis Wright tied for second. Blount was excellent through his final season 1983. Haynes and Wright were so close it was impossible to separate them. Both 6-2, smooth coverage men. Wright a little better on run support, Haynes had better hands.


Backing them up Gary Green and in another tie, Lester Hayes and Ken Riley get the Second-team nods. Hayes and Riley got all their "awards" in this 1975-85 period.

Donnie Shell is the strong safety and Nolan Cromwell the . Tim Fox and Gary Fencik. We may be shorting Gary Barbaro a bit, as he had e big years, but since the decade includes 1985, we went Fencik. The same is true of Johnnie Gray who was a top rated safety by Proscout, Inc. in the late-1970s and early 1980s. He was an excellent free and strong safety so we give him an honorable mention along with Gary Barbaro
Mosely and Stenerud are the kickers and they are the guys with the most "Alls" and were good  their percentages. The returners are based on touchdowns and All-pros more than average, but all here are   that category as well.
J.T. Smith is an honorable mention returner as is Freddie Solomon, who are behind Upchurch and Johnson and Clayborn and Payton.

Hank Bauer was the NFL Alumni Special Teams Player of the Year a couple times and had a monster 1981 season with 52 credited tackles. Ivory Sully of the Rams and Jeff Barnes of the Raiders were guys who covered from gunner positions, blocked on returns, and were great kick blockers, both of punts and placements. We had to include both on the Second-team. Mosi Tatupu  an honorable mention. (He would be on our 1980s team as special )

Agree or disagree? Post in comments section below.
Posted by John Turney at 3:54 PM