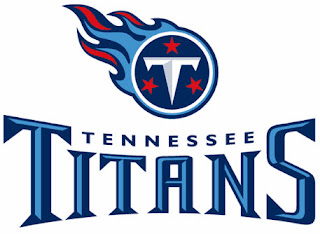 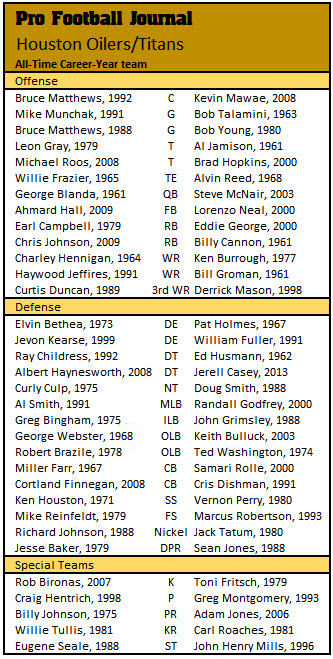 Bruce Matthews does get two slots, one for center and one for guard since he played both positions in different seasons and dominated at both. Kevin Mawae, 2008, is the Second-teamer and honorable mentions go to Carl Mauck, 1979, and Mark Stepnoski for his 1996 season.
Mike Munchak, like Matthews, had plenty of qualified seasons, we went with 1991. Bob Talmanini was an All-AFL selection and for the other guard we went with old man Bob Young, who was All-Pro for the Cardinals in 1979 and came to the Oilers in 1980 and helped Earl Campbell gain over 1,900 yards rushing. Sonny Bishop's 1968 AFL All-Star season of 1968 is the lone honorable mention.
Leon Gray was a dominant player with the Patriots and a contract dispute took him to the Oilers and he continued his excellent play in 1979. We went with Michael Roos, 2008, over Al Jamison's 1961 All-AFL (consensus) season. We've seen plenty of Oilers highlights from that era, but frankly, it is hard to get a real gage on tackles and guards and centers in those clips. What we know is Blanda was hard to sack, likely due in part to his quick release and smarts and in part to the blocking. The players and writers of the era voted him All-AFL so we take them at their word.  Brad Hopkins, 2000, and Jamison are the backups. David Stewart's 2008 season as an honorable mention.

Ahmard Hall, 2009, blocked for Chris Johnson's 2000-yard effort and Lorenzo Neal was the lead blocker for Eddie George's 2000 season, which was his best. Tim Wilson's 1978, 1979 and 1980 would be honorable mentions, he's the kind of fullback who carried the ball, whereas Hall and Neal are the "guard in the backfield" types.
We went with Earl Campbell's 1979 over 1980 and 1978 in that he was a consensus MVP. In 1978 and 1980 he won MVP awards, but not all of them. Chris Johnson's 2000-yard season of 2009 was next after Campbell. Eddie George was third. We went with Billy Cannon's 1961 season where he was as good a back as there was in the AFL and he likely would have been one of the top backs in the NFL as well.
George Blanda takes the top spot, he was AFL MVP, All-AFL and won the AFL Championship, throwing 36 touchdowns. Steve McNair gets the nod for his MVP season in 2003, though Warren Moon's 1990 saw him receive the NEA MVP and the AP Offensive Player of the Year. It was close. 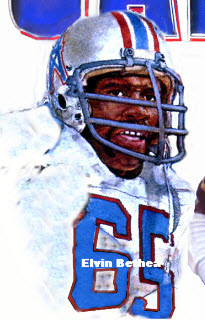 William Fuller, 1991, 15 sacks to go with 53 tackles (4.5 stuffs) only got him minimal post-season honors. That year, 1991, was very deep in defensive end talent. And in a year that didn't go so deep in DE talent, one could get Defensive Player of the Year consideration with the numbers Fuller posted but he only got Fuller All-AFC and Pro Bowl selections. Pat Holmes was one of the Second-team picks as he was All-AFL selections in 1967.
Kyle Vanden Bosch, 2005 and 2007, Sean Jones, 1993, are all honorable mentions as well as Andy Dorris's 1979 season with 9½ sacks. We've always felt his contributions to the Oilers defense in that era was underrated. Don Floyd was a Second-team All-AFL pick and gets a mention as well.

For middle linebacker in a 4-3, we went with All-Pro in 1991 Al Smith and then with Randall Godfrey, for his 2000 season. As the inside linebackers in the 3-4  it was Greg Bingham, 1975 and John Grimsley, 1988. Bingham was very consistent and a key in the conversion to the Bum Phillips "Okie" or 3-4 defense. He led the team in tackles with 128 in 1975, 6.5 were stuffs, he picked off four passes. But, if you looked at his other years, through 1983, the numbers were very similar, but the four picks stood out.

Robert Brazile, 1978, and George Webster, 1968, were easy choices, but the season we chose was not easy. We went with 1978 because he got six votes for Defensive Player of the Year and deservedly so, He had a career-high 115 tackles and 9.5 stuffs to go with 11 passes deflected and five sacks. However, any season from 1976-79 for Brazile would qualify.
Any of Webster's first three seasons all would be good picks as well but we went with 1968 when he had 118 tackles, 10 passes defended and was a consensus All-Pro.
Webster was a 3-time All-AFL selection before knee injuries hampered him. He hurt a knee in 1970 and never recovered his explosiveness as he went to the Steelers and then the Patriots. In 1974, for the Patriots he was effective as an outside linebacker in the 3-4 scheme they converted to that year. It was hard to tell what Webster could have been had he been healthy. In the late 1960s he was being called a "young Bobby Bell" by AFL writers.
Keith Bulluck, 2003, was excellent and the final slot goes to Ted Washington, 1974, who was the first linebacker we've found in our research to have double-digits in sacks. That year he had 11. The next OLBer to do that was Joel Williams in 1980. We also considered Washington's 1976 season (16 stuffs and 5 sacks) and 1975 (3 picks). But before Brazile arrived in 1975, Washington was the glue that held the newly adopted 3-4 defense together.