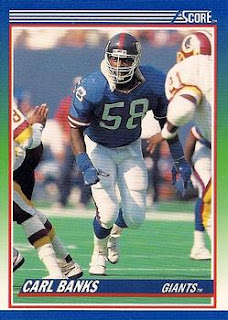 One more of the 1980s/90s complete linebackers we are featuring today is Carl Banks. He is a bit different in that he spent most of his time in a 3-4 defense. He was on the opposite side of the defense to Lawrence Taylor throughout his career, so he didn't need to rush much, but when he did, he was effective, with 6.5 sacks in 1986 and 9.0 sacks in 1987.

He got his first selection to an All-Pro team in 1986 when USA Today's Gordon Forbes chose him as one of the linebackers on his team, reflecting that he was a big part of the Giants defense in his first season as a starter.

In 1987 he was a consensus All-Pro. In 1988 he was an honorable mention, likely getting a vote or two in the AP poll. In 1989, when he had 7 fumbles forced he was named All-Pro by the Washington Post's Michael Wilbon. That was the last time he was mentioned in the "Alls". He was a solid player the rest of his career, doing the tough things a strong-side linebacker has to do. In 1994 he joined Bill Belichick in Cleveland.

Here are his statistics, the tackle totals come from NFL Gamebooks. 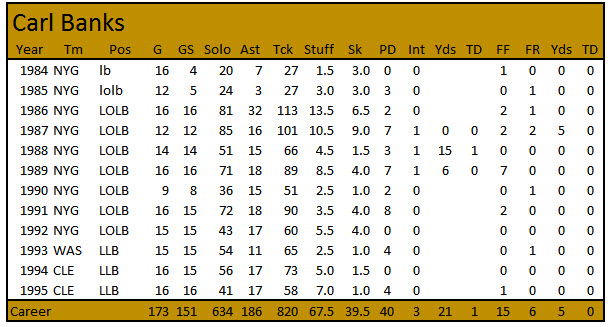