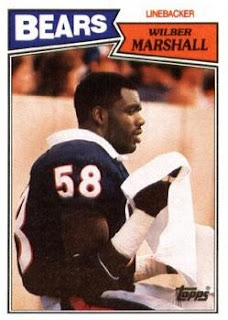 Another of the 1980s complete linebackers we are featuring today is Wilber Marshall. He began with the Bears and was a key player in the Buddy Ryan defenses and also after Ryan left.

He was signed by the Redskins as a free agent and played well there, as well, though it was reported there was some differences in the schemes that took Marshall some time to adjust to. In 1991 he moved from the right linebacker (Buck in the Richie Petitbon terminology) to the left linebacker (Stub) and had two fabulous seasons. He rejoined Buddy Ryan in 1993 with the Oilers and again in 1994 with the Cardinals as Ryan installed the 46 defense in those two places. He finished with the Jets in 1995.

His honors were as follows: He was a consensus All-Pro in 1986 and then in 1987 he only made the Gannett News Service All-Pro was selected by writer Joel Buchsbaum, a writer and researcher we revere. In 1991 Marshall was a consensus Second-team All-Pro by the "major" Gordon Forbes of USA Today placed him on that paper's All-Pro team.

In 1992 Marshall was again a consensus All-Pro—making the vast majority of teams that were selected.


Here are his career statistics, the source for tackles is NFL Gamebooks.

Marshall didn't get many accolades after his 1990 season but that year he had a career-high 12 stuffs and five sacks—17 plays behind the line of scrimmage.
Posted by John Turney at 4:06 PM