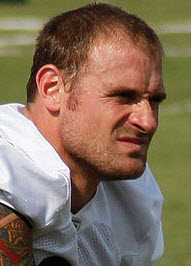 On occasion he'd line up as an inside rusher over a guard or reduce down to 3-technique when the Rams would run some or the Bear (46) front. He would also be called on in coverage from maybe once a game average (2009, 2011) to up to 3 times a game average (2010) during the Steve Spanuolo era in some of the exotic blitzes that the coach liked to run. And in 2014 and 2015 on a few occasions he would stand up in the A-Gap in a package the Rams called "Ranger". So, Long is no stranger to moving around the defensive formation, from time to time.

However, these things were a rarity, game-in and game-out Long was a left defensive end when he was at his healthy peak, from 2010-2013.

Last Sunday night, though, we saw Long play seemingly all of those in the same game, well, except for being a left defensive end (5-technique) in a 3-point stance, which is how he made his bones in St. Louis. That position, he didn't play.

In the 39 snaps I counted, he lined up as a stand-up 0-technique, standing the left A-Gap as an inside linebacker, call it a stand-up 1-technique. Three times he lined up as a 3-technique, and another as a 4i (which may have been a wide 3). He lined up as a 5-technique three times, all on the right side and all in a three point stance. As mentioned, he did no snaps in the 5 from the left, his usual position in St. Louis. He was head-up on the tight end five times (6-technique) both in a 2- and 3-point stance.

Twenty-four times he was in a 9-technique and a couple of those were 9 and all of them were in a 2-point stance. Those could be divided into a base 3-4 and some were nickel where he was essentially a stand-up end. And in those they were really 5-wide techniques, rather than a 9, but not having a playbook I am not sure what it is called, so I am using the nomenclature I am most familiar with and the verbiage than Bill Billichick usually uses. Regardless, a few times from those spots he dropped into coverage.

So, while none of this, except playing base in a 3-4, is new to Long, but it is fair to say he never did all of that in one game before. If this is what is going to happen all season, Long could be very productive but also not get established enough at one position to possibly make his first Pro Bowl. Long is likely not too concerned with that since he is seeking the ring and stated that is why he signed with the Patriots, but one thing is for sure, you will have to look around the defensive formation to find him because is he played inside linebacker, outside linebacker, defensive tackle, defensive end and even one snap as a nose or middle linebacker, depending on how you want to define him standing in front of the center.

As far as production he had 3 tackles, one sack and as a 3-technique (defensive tackle) he was held on a key play that put the Cardinals back 10 yards. So, he's still 95% rusher, but a few times he was asked to drop into a zone and cover.

Certainly no one asked me, but any snap where Long is not going forward is a wasted snap. Any snap where he's inside a 5-technique is not wasted, but in the times I've seen it over the years, it's not going to be as productive as when he's outside. And any snap as a 5-, 5-wide, or 9 that is not on the left, is going to be good, but his excellence, in my view, has been from the left side. But, then again, I suppose Bill Bellichick and Matt Patricia have the skins on the wall to make it work. ( heavy sarcasm!)

Here are some screen shots: