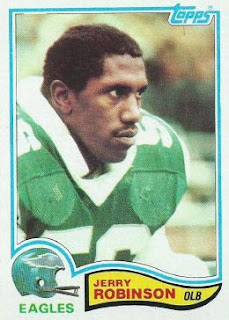 Another of the fine complete linebackers of the 1980s era was Jerry Robinson but it seemed his career was derailed when he was asked to play inside linebacker.

He was a young, dynamic player from 1979-82 as an outside linebacker in the Eagles 3-4 defense, but in 1983 he was moved to inside backer in that same scheme. He performed well in his new at 6-2, 224 pounds, he was not the ideal fit for that scheme at from a physical standpoint.

As an outside backer he was getting a few sacks, knocking down passes, picking up fumbles and returning them. Inside he made tackles with the Eagles, but still, it seemed some of that he made earlier in his career were missing.

He went to the Raiders in 1985 and bounced from inside to outside linebacker, in fact, in 1987 he started 6 games at each. By 1988 he was usually not on the field on passing downs, which was his forte, but time apparently caught up.

In 1980 Robinson was an All-Pro on Paul Zimmerman's Sports Illustrated team and in 1981 he was All-Pro again, but not a consensus pick. In 1983 he was a Second-team All-Pro at his new inside linebacker position as he recorded 163 tackles and deflected 10 passes.

It would have been very interesting to see what he might have done as an outside linebacker his whole career, perhaps it would have looked more like Seth Joyner or a player with that skill set, which was the same as Robinson's.

Here are his career stats, with the tackles coming from NFL Gamebooks. 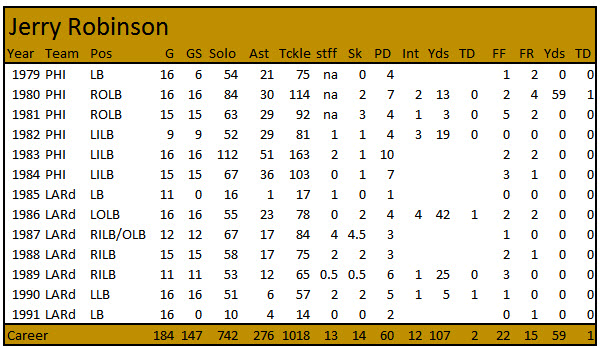