At Pro Football Journal we are trying to pick the best individual seasons in the history of each franchise, which we will continue today with the Eagles. By "Career-year" we mean the best performances at each position, with the following rule: Only one season per player per position. For example, here, we cannot pick Reggie White’s best two seasons and use all DE slots. 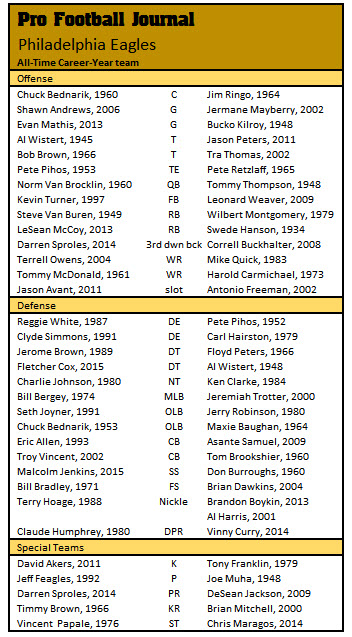 Norm Van Brocklin, 1960, gets the top spot and Tommy Thompson, 1948, takes the Second-team spot. They were both Champs and Van Brocklin was the MVP. 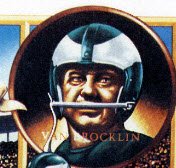 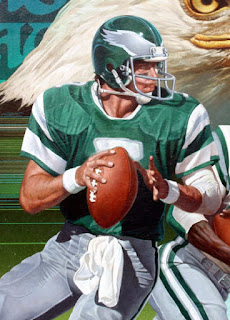 For honorable mentions, we Sonny Jurgensen, 1961, Roman Gabriel, 1973, Ron Jaworski, 1980, Randall Cunningham, 1990, Donovan McNabb, 2004, and Michael Vick, 2010. All of those players were some sort of Player of the Year or All-Pro. We also need to add Nick Foles, 2013, as a statistically great season. There were a few other "stat seasons" we left off, though they were good, they didn't rise to the level of the All-Pro/Player of the Year level of some of the ones we picked.

Steve Van Buren, 1949, and LeSean McCoy, 2013, were easy choices as the top two running backs. Van Buren is one of the All-time greats who does not seem to get his due and Shady McCoy's 2013 season was his best. 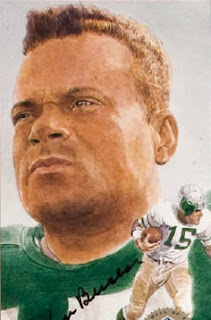 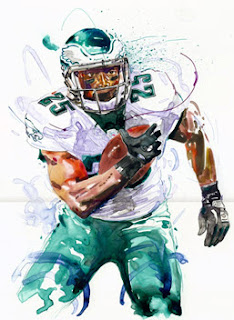 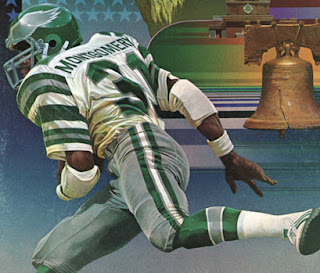 Terrell Owens, 2004, and Tommy McDonald, 1961 are the receivers. McDonald was terrific in the intermediate area where he could break on a dime and had enough speed to beat the good corners deep and he had hands every bit as as Raymond Berry. 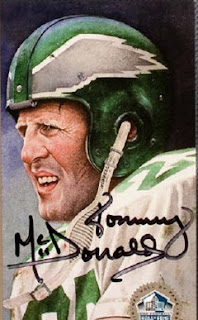 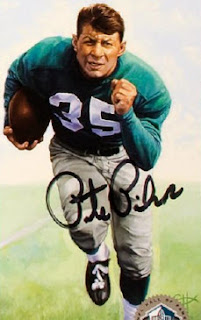 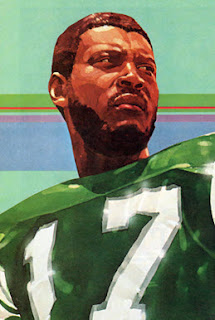 Mike Quick, 1983, and Harold Carmichael, 1973. Both were All-Pros and among the best in the NFL for those seasons, ranking high in receptions, yards and touchdowns. 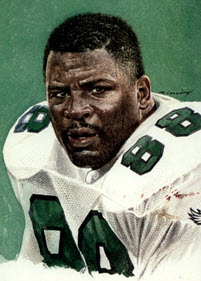 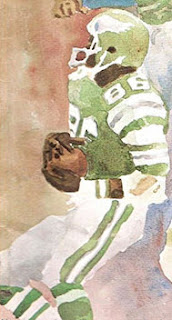 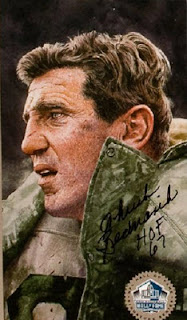 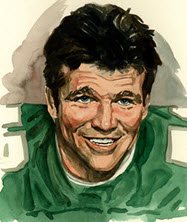 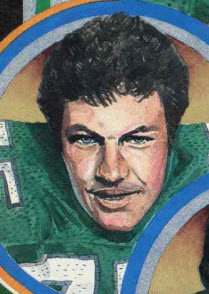 Bednarik played both ways, but his career breaks down as more of a linebacker early, then more of a center in the late-1950s. In 1960 and 1961 he had long stretches where he was playing both. Andrews was a powerful drive blocker and Mathis more of the technician-type. was the best blocker for the best running back of his time. Bob "Boomer" Brown just people with is 300 pounds and, 4.9 forty speed.

had several good years, we went his first when he had 14 tackles, a forced and a recovery. 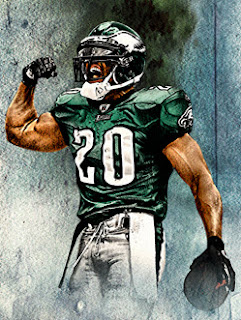 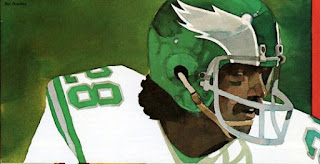 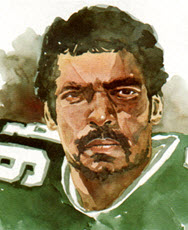 Bill Bergey, 1974, is the First-team middle linebacker. The outside linebackers are Seth Joyner, 1991 (55 tackles, 12 passes defensed, 6.5 sacks, 3 INT, 6 FF, 4 FR two for a TDs) and Chuck Bednarik, 1953, Bednarik was part of a 5-2 defense in 1953. Bednarik was always around the ball that year, he had 6 and four fumbles recovered. Joyner was a consensus All-Pro and was a linebacker who was on the field on all three downs and could cover and blitz. 1992 was almost a twin season, and it was considered, but it's like splitting hairs, but since Paul Zimmerman chose Joyner as his Player of the Year for 1991, we went with that season. For the record, in 1992 Joyner had 72 tackles, 15 passes defensed, 6.5 sacks 4 picks, 2 for touchdowns, 4 forced fumbles and a fumble recovery. 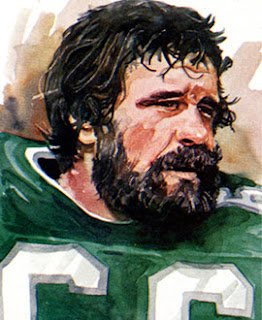 Jeremiah Trotter, 2000 (All-Pro 120 tackles, 3 sacks and a pick-six), backs up Bergey and Jerry Robinson, 1980, and Maxie Baughan, 1964, take  Second-team outside linebacker spots. was a consensus All-Pro and had a good pass-rushing year with six sacks. Robinson had 114 tackles, 7 passes defended, 2.5 sacks, 2 interceptions, 2 FF, 4 FR, one for a TD. His 1981 season had very similar numbers and either would have been a good choice for this slot. 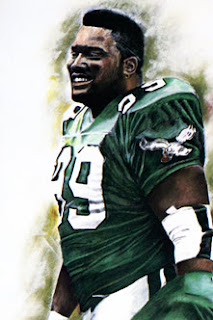 Floyd Peters, 1966 (Pro Bowl, All-Conference, 8.5 sacks) and Al Wistert, 1948, back those two up. George Allen called Wistert one of the first really great inside rushers. Peters went on to be one of the great defensive line coaches in the history of the NFL. 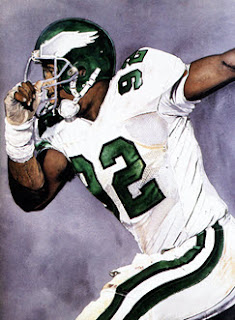 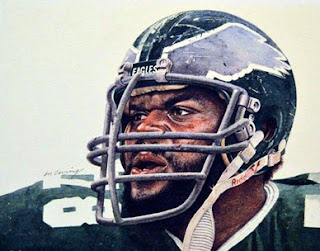 Pete Pihos, 1952, Carl Hairston, 1979 (100 tackles, 15.5 sacks) are the Second-team defensive ends. Hairston was a 3-4 end in the base defense and played defensive tackle in the nickel defense that year, though later years with the Eagles, he preferred to stay the right end in nickel situations.

Agree or disagree? Post in comments sections below.
Posted by John Turney at 11:15 PM