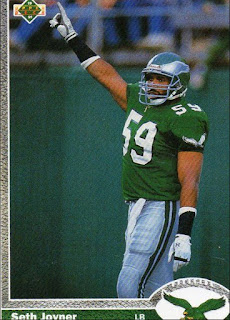 Seth Joyner was one of the complete linebackers of his era, spending most of his time as a left linebacker in a 4-3 defense, though it was a Buddy Ryan defense, meaning he plays plenty in a 46 defense and due to his coverage skills often the only linebacker in the game if the went to a dime defense. He could also blitz effectively as well.

His post-season honors spanned from 1990 through 1996. In 1990 he was named to Paul Zimmerman's Sports Illustrated All-Pro team. The following year Zim named Joyner as the NFL Player of the Year, and most of the other organizations and All-Pro "choosers" put Joyner on their teams as he was a consensus All-Pro.

In 1992 the Buffalo News and Ft. Worth Star-Telegram named him to their All-Pro teams and the next season it was the PFWA who named him All-Pro. Additionally, in 1993 the Milwaukee Journal (selected by staff writer Bob McGinn with input from various NFL personnel).

We list all the teams for completeness, though we think the proper way to handle All-Pro teams is to use Total Football:  The Official Encylopedia of the NFL as the definitive and authoritative source for All-Pro teams. We also list the esoteric teams because they are often selected by fine writers, many of whom were or are the Pro Football Hall of Fame selection committee.

Here are his career stats, as per the NFL Gamebooks. 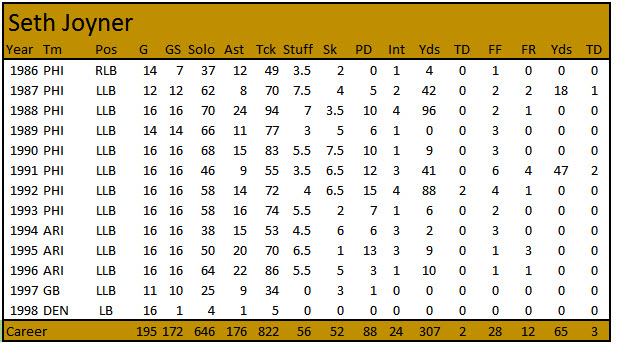 As can be seen, he was credited with quite a few passes defensed, one of the higher totals we've seen for linebackers and also had 52 sacks and 24 interceptions and 28 forced fumbles. We think 1991 was his best season, but there were others that were almost the same, at least statistically.