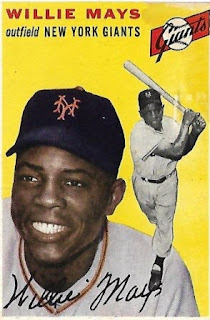 September 20th, 1955: Willie Mays hit home runs in both games of a doubleheader against the Pirates (both off of Vern Law). The reigning MVP had now hit 50 homers during the season as he pulled away from the early season leader Ernie Banks.

The statistical criteria for this story is simple—to amass 2000 total bases over the course of six consecutive seasons. From 1954 through 1959 the Say Hey Kid recorded 2,132 total bases; the most of any player over the last 60 years.

The lithe Cub shortstop mentioned above is in the first of his six consecutive seasons of joining our small club. Banks amassed 2,045 total bases as he toiled daily for the . The only man to contest Mays for the top spot in our club is the young slugger in Milwaukee; Henry Aaron. 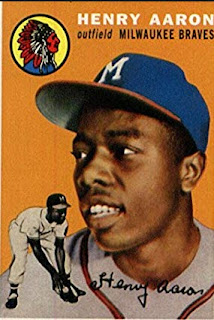 Hammerin' Hank is a triple shy of catching Willie as he totaled 2,129 from 1956 through 1961. Joining these three sluggers was the pride of Cincinnati; Frank Robinson. From 1957 through 1962 Robby registered 2,006 total bases.

No American League player has joined the list, though Mike Trout of the Angels has an outside chance if he can amass 680 total bases for 2016 & 2017.
Posted by TJ Troup at 4:44 PM